INDIANAPOLIS -- Having witnessed first-hand Ben Roethlisberger sprinting across a downtown street to catch up to a friend on Friday night -- so, OK, sprinting is a gross embellishment in this case -- we can dutifully report as baseless all those rumors that the Miami of Ohio quarterback can't run out of sight in a week.

Heck, judging by the rate it took him to successfully flag down his buddy, and head off in the general direction of a nearby restaurant, the bet here is that Roethlisberger could have traveled beyond our field of vision in perhaps as few as three days. 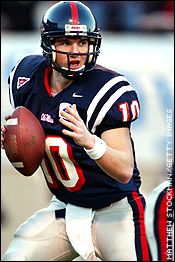 All right, enough lame jokes about the ambulatory pace set by Roethlisberger, one of the top quarterback prospects here at the annual combine workouts, and a player that scouts now project as a likely top-10 pick.

Truth be told, Roethlisberger certainly moves around as well as any of the other three or four first-round quarterback prospects.

That's the good news. The not-so-good news for NFL talent evaluators is that none of the top quarterback candidates maneuvers with anything more than pedestrian quickness. So while we are shooting down the hyperbole that Roethlisberger can barely put one foot in front of the other, let's debunk another myth, too, one that suggests the NFL is evolving into a league of nimble-footed passers.

Yep, another combine, more mammoth-sized quarterbacks parading in front of scouts and the media, and another draft when scouts aren't apt to unearth another Michael Vick. Or for that matter, any quarterback prospect even remotely resembling the Atlanta Falcons star in pure foot speed.

Eyeball the top quarterbacks invited here for scrutiny, many of them built like tight ends, and the term "scrambler" doesn't exactly leap to mind. These are players who still win games with their arms, not their feet, and that remains the most critical element of the job description in the NFL.

"I think everyone got caught up in the [excitement] over guys like Donovan McNabb and Vick, players like that, and decided the landscape had changed," said Buffalo quarterbacks coach Sam Wyche. "The truth is, those guys were an exception, not the rule. The position hasn't changed that much in what it demands. Now, if you can get a quarterback who has that extra dimension, well, great. It's a bonus. But I don't know a lot of quarterbacks who have been drafted based on their [40-yard] time."

At last year's combine, quarterback Kyle Boller wowed the scouts with an impressive 4.59 time in the 40, but the buzz he created by running faster than some of the tailbacks and wide receivers in attendance wasn't what got him chosen in the first round by the Baltimore Ravens. That very quick 40-yard time merely validated the suspicion Boller was an excellent all-around athlete. Had he been scattershot as a passer in his campus workout, though, Boller would have dropped from a guy who ran fast to an also-ran in the 2003 quarterback talent pool.

There is one key caveat overlooked by those who predicted Vick would be the new mold by which every other quarterback candidate was evaluated: He's one of a kind. To suggest that Vick would become the best measuring stick for the new breed of quarterback in the league was to presuppose there would be an entire population of guys with his unique skill set emerging on the NFL horizon.

But three years after Vick entered the NFL, scouts are still waiting for even a reasonable facsimile of him, and there really hasn't been one yet. There won't be a Vick clone at this combine, either, although a few players like J.P. Losman (Tulane), Josh Harris (Bowling Green), Bradlee Van Pelt (Colorado State) and Rod Rutherford (Pittsburgh) are excellent athletes in their own right.

None of those prospects, though, is viewed as possessing first-round potential.

Of the three likely first-rounders -- Roethlisberger, Eli Manning of Mississippi and North Carolina State's Philip Rivers (one of the fastest-rising players at any position) -- all are pretty much classic pocket passers. One scout who has evaluated video of all three of the top quarterbacks guessed that, as a group, they didn't have 60 collective scrambles in the 2003 college season. And that fact, he acknowledged, neither fazed him nor entered into his assessment of their skills.

"The terms might sound the same," allowed Manning, "but there is a huge difference between footwork and foot speed, you know? Of the two, there is pretty much no doubt that footwork is more critical to your success as a quarterback. Would I love to be able to run a 4.6? Heck, yeah, all of us would. But it's more important to me that my mechanics, footwork being a big part of that, are solid."

There is no small irony in the fact that when the college game was heavy into the run-oriented offenses like the wishbone and the veer scouts typically eschewed the running quarterbacks. Now that college passing games have become increasing sophisticated, and universities are producing passers infinitely more polished, teams are trying too hard to uncover a mobile quarterback.

If the current pool of draft-viable quarterbacks is any indication, the scouts and coaches will have to keep looking, because there is an undeniable back-to-the-future reality that is taking hold at the position. Of the consensus top-10 quarterbacks here, six stand 6-feet-4 or taller and six weighed in at 220 pounds or more. Roethlisberger was a whopping 249, tonnage that would once have been considered more appropriate for a linebacker, when he weighed in earlier this week.

According to Roethlisberger, no one blinked when he stepped onto the scale, and his weight isn't significantly more than what he played at during the '03 season. His natural size affords him, instead, the kind of presence and pocket stature, and, it is hoped, the durability most franchises covet.

Raise the subject of their mobility (or lack thereof) with the top quarterbacks here and they all offer up the same sort of Alfred E. Neuman "What, me worry?" expression. More so than some of those pushing the mobility agenda, the youngsters seem to realize the notion of the running quarterback making for a better fit in the NFL is a skewed perception. In truth, with only a few exceptions, the running quarterback in the NFL now has provided diminished returns the past few seasons.

"You're still paid for what hangs down from your shoulder, not what's below your knee," said Rivers. "The fact is, there are guys here who can throw the heck out of the ball, and you're not just going to suddenly teach them to run fast. I think any team that gets a real good running quarterback considers it a plus. But if you can throw the football, I don't think coaches view it as a minus if you can't get under 4.8 in the 40."