Displaced by the fury of Hurricane Katrina, the New Orleans Saints will set up shop, at least temporarily, in San Antonio for a second straight year. Where the franchise will play what now appears likely to be a home-away-from-home regular-season schedule, though, has yet to be determined. 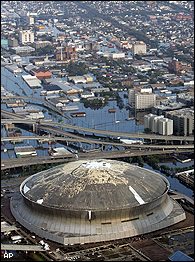 "All options are under consideration," Saints director of media relations Greg Bensel said about where New Orleans might play its home games. "It's all on the table and there will continue to be discussions. But, for now, nothing is decided."

What the team does know is that it will practice in San Antonio for the foreseeable future. The Saints will fly to San Antonio following Thursday night's preseason finale against the Oakland Raiders, will be reunited there with their families, and begin preparations for the Sept. 11 season opener at Carolina. The Saints have spent this week practicing in San Jose, Calif.

The Saints practiced for three days in San Antonio last year when they were forced to flee New Orleans in advance of Hurricane Ivan. The club will be housed in downtown hotels but a practice site has yet to be determined. The practice sites in San Antonio still under consideration include, but are not limited to, the Alamodome and the San Antonio School District Spring Sports Complex.

San Antonio officials were at work Wednesday trying to determine which sites would be available to, and most appropriate for, the Saints. It is likely that the Saints will return to San Antonio even after the season opener in Carolina, and one club source said the plan is to be there for at least two weeks and likely longer.

As for home games, Mike Abington, director of the Alamodome, was checking on the facility's available dates, in the event the Saints need to play there. There were rumors that New Orleans would play its Sept. 18 home opener against the New York Giants in San Antonio and then move subsequent home games to LSU. League officials, who prefer the Saints play their games as close to New Orleans as possible, were in contact on Tuesday with LSU officials.

There was even some preliminary discussion about playing home games at Reliant Stadium in Houston.

San Antonio city councilman Roger Flores told the Express-News newspaper that he had apprised Saints officials on Tuesday that the city would attempt to accommodate the club if a move were necessary. Saints owner Tom Benson, once one of San Antonio's biggest car dealers, still has strong ties to the city's business communities.

"Mr. Benson has been an integral part of our business community," Flores said. "We also have a fan base that should provide them with some measure of success financially."

In a rather ominous statement, New Orleans mayor Ray Nagin said Wednesday that Doug Thornton, a regional vice president for the company that manages the Superdome, told him it will be "very, very difficult" for the Saints to play home games there this season. League officials pointed out that New Orleans has just one home game in September and were holding out hope the schedule might allow repairs by the season's second month.

But even if that were the case, the general conditions in New Orleans, where 80 percent of the city is under water and electricity might not be restored for a month or more, could make a home schedule untenable. Nagin on Tuesday night estimated that, with the recent breaches to levees around town, it could take at least three months to have New Orleans up and running again in anything remotely resembling normalcy.

"We're hoping for the best," Bensel said. He called playing all the team's home game away from the Superdome "a worst-case scenario." But some league sources contacted Wednesday, including a few owners, acknowledged the prospects the Saints will be able to soon return to the Superdome looked remote.

Saints director of operations James Nagaoka was in contact with officials from other cities on Tuesday about possible practice sites. But the Saints settled on San Antonio because of its relative proximity, team officials' familiarity with the city, and because of the facilities available there.