CHARLOTTE, N.C. -- Even as they exited the visitor's locker room at Bank of America Stadium late Sunday afternoon, exultant Saints players were confronted and reminded by a stark and sobering dose of reality, that not even what transpired earlier on the football field will set the Gulf Coast straight anytime soon.

On a folding table at the door to the locker room sat freshly-minted identification cards from the Jefferson Parish Sheriff's Department, strung on lanyards, the requisite passport that players must possess to return to the New Orleans area in the next few days and to have access to their homes and belongings. 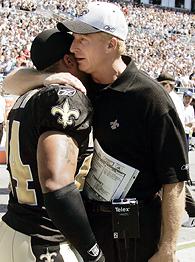 As players snatched the photo I.D. cards from the table on their way to chartered buses, it certainly occurred to several of them that Sunday's three-hour respite from the events of the past two weeks was far too short. Then again, the last-minute 23-20 victory over the Carolina Panthers was pretty darned sweet, nonetheless, Saints players acknowledged.

For lots of reasons.

"I don't think [the enormity] of it struck me until the game actually ended," said kicker John Carney, whose 47-yard field goal with 3 seconds remaining provided the Saints an exhilarating capper to a day when emotions ran high. "But all during the game, yeah, you could see that guys were emotional. You don't want to attach too much importance to it, you know, because it's still just a football game. But, sure, there was a sense that we were playing for more than ourselves today. We knew what this represented."

It has become a common practice, of course, to assign transcendent definition to all sports, but especially to football. Sunday's matchup of NFC South rivals, though, might have actually deserved such status. Given the week-long acknowledgement by Saints players that they felt additional pressure to provide some small degree of escape for their displaced fans, and to create a semblance of normalcy for themselves, this was regarded as more than just another season opener.

On Saturday evening, in the final team meeting, coach Jim Haslett rose to read a letter that had been sent to him by Mayor Ray Nagin of New Orleans, graphically detailing the catastrophic destruction of the city, the loss of lives and homes, children orphaned and elderly dead in their homes. Haslett, who politely declined commissioner Paul Tagliabue's offer to address the team that evening, could not get through the letter. He handed the missive instead to director of player development Ricky Porter to finish.

"I'm not going to tell you that guys were crying because, if you've had the television on for the last two weeks, you were aware of most of the stuff," said left offensive tackle Wayne Gandy. "But to hear it put in those terms, to know that whatever is left of New Orleans was looking to us for some kind of lift ... well, the room was pretty quiet. You could feel what was in guys' hearts, that we were going to play hard."

Fortunately, for the Saints and the city they represent, the team performed with great heart all afternoon. It needed to, since the Saints, characteristically, did not play with their heads for much of the day.

Even by New Orleans standards, the Saints did not play smart football. The litany of transgressions was lengthy.

After driving 80 yards on the game's opening possession -- a 14-play trek that consumed 9:37, culminated in Deuce McAllister's 4-yard touchdown run and demonstrated that New Orleans isn't just paying lip service in 2005 to Haslett's admonition to stick with the power running game -- the errors began to mount.

Cornerback Mike McKenzie missed a tackle that allowed Carolina wide receiver Steve Smith to turn a 12-yard reception on a hook pass into a 33-yard touchdown. Defensive end Darren Howard recovered a fumble just before halftime, then ill-advisedly attempted to lateral it, and the Panthers recovered and actually got two shots at the end zone in the final seconds. Quarterback Aaron Brooks had the ball squirt out of his hand for a fumble at the Carolina 2-yard line, squandering a scoring opportunity.

On third-and-2 from the Carolina 6, McAllister lost five yards on a toss sweep, and the Saints had to settle for a field goal. McKenzie had an interception squeeze through his hands at the goal line and, given new life, the Panthers scored a touchdown three plays later. On fourth-and-inches play from the Panthers' 26, rookie right offensive tackle Jammal Brown, the team's first-round draft choice, was penalized for a false start, forcing another field goal.

And in one stretch that spanned parts of the second and third quarters, New Orleans started three possessions at the Carolina 45-, 14- and 27-yard lines, but managed only a single touchdown. The Saints ran off 21 straight snaps in Carolina territory during that stretch, but McAllister's second touchdown of the day, on a 2-yard blast over left tackle, was the only time they could get to the end zone. Oh, yeah, New Orleans was also penalized nine times for 74 yards for the day.

"We did some dumb things, no doubt about it," Haslett acknowledged. "But we were able to overcome them, and that hasn't always been the case for us. This team, though, is very resilient. I told our guys that it's the closest group I've ever been around. They like each other, they stick together, they fight hard for one another. That's a good sign."

Haslett had predicted last Sunday night, in his first news conference in San Antonio, that the game would be close. That's certainly in keeping with a competitive series, one in which the last nine meetings have been determined by an average of 4.9 points. Only two games in that stretch had differences of more than six points, six were settled by four points or fewer, and four by three points or fewer.

Said Brooks: "Well, we've lost our share of these kinds of games to this team. It felt good to win one like this."

That the Saints were able to overcome their own foibles and pratfalls was testimony not just to this team's collective resolve this week, but to several other elements as well. A few of them:

• Despite just modest numbers in the running game -- McAllister averaged only 2.5 yards on 26 attempts and the Panthers had but 101 yards on 33 carries -- Haslett never gave up on the rushing attack. There have been times in the past when the run became just an afterthought for the offense, but Haslett had mandated that new coordinator Mike Sheppard make McAllister the centerpiece of the design.

• The revamped defense surrendered 350 yards and an average of 5.6 yards per run, but suffered fewer lapses. Only on a 39-yard run on which the Saints overplayed a bunch formation to the right did Carolina tailback Stephen Davis really shake free. And a unit that had just 13 interceptions for the entire 2004 season had two Sunday, one each by McKenzie and nickel corner Jason Craft.

• His turnover at the Carolina 2-yard line notwithstanding, Brooks played well much of the day. He was smart enough to recognize that the Panthers were taking away wideout Joe Horn, and came off him several times to tight end Ernie Conwell, who caught six balls for 71 yards, but also suffered a partially dislocated jaw and a concussion. Brooks was 18-of-24 for 192 yards and, while he didn't have a touchdown pass, neither did he throw an interception. On the final two-minute drive, he marshaled the offense 49 yards in six plays, the big play coming on a beautifully drilled 25-yarder deep up the middle to Horn, between defenders.

Three plays after the completion to Horn, with Carney reminding himself to concentrate just on his mechanics and not the ramifications his field goal would have, the veteran hit the game-winner. "Wonderful, just great, but go talk to the players," said owner Tom Benson, who will travel to Baton Rouge on Monday with Tagliabue for a meeting that will likely determine where the Saints play their home games in '05.

In New Orleans' locker room, it was pretty obvious that, no matter where the Saints play this season, their collective thoughts are on their hometown.

"If there's anybody left on Bourbon Street," said Horn, "I'm sure they're partying right about now."

Haslett, who was walking a pretty fine edge earlier in the week but maintained his poise and emotion Sunday, awarded one game ball to Mayor Nagin for the city of New Orleans. Another game ball, Haslett said, was dedicated to all the Gulf Coast residents.

"Those people, what can you say?" Haslett said in a near-empty locker room. "Believe me, our guys were aware of it. You could feel the emotion on the flight up here. You could feel it in the locker room. And you could definitely feel it on the field. This was an important win for this football team but it kind of goes way beyond that, doesn't it?"