EAST RUTHERFORD, N.J. -- In a week as passionately polarized as the past one has been for the New York Giants, a stretch that began with a stirring comeback victory over Denver last Sunday but also included the death of the franchise's beloved patriarch, a team's collective emotions can become either fragmented or focused.

On Saturday evening, as the Giants huddled in their hotel, key players emphasized during separate offensive and defensive meetings, that the time had arrived to honor the memory of co-owner Wellington Mara with deeds and not words. And on Sunday afternoon, in a thorough thrashing of their oldest and most reviled opponent, the Giants turned grief into the kind of great all-around performance of which Mara would have been very proud.

They were as focused as a laser, surgical in their execution, and essentially burned holes through every unit of the outmanned Washington Redskins bunch. 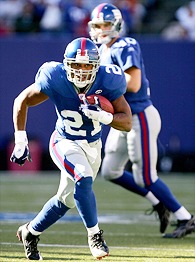 "Let's be honest," acknowledged center Shaun O'Hara, in the wake of New York's 36-0 victory, "it was the only way we could have made this whole week right. It was a week of emotions, a week of reflection, a week of distractions. But when we finally focused on football, and realized we had to put the other stuff behind us and just go out and play, it all came together. I mean, it was just all so fitting, you know?"

Fittingly, the last two players with whom Mara visited on Monday, a day before he died, played major roles in a victory that catapulted New York into first place in the NFC East. Running back Tiki Barber and tight end Jeremy Shockey, summoned to the Mara home in Rye, N.Y., to say their good-byes, each scored touchdowns. And Barber established a new career best, rushing for 206 yards on 24 carries, setting the tone with a 57-yard jaunt on the opening play from scrimmage, and rolling to 171 yards in the first half alone.

"It was the kind of win Mr. Mara would have liked," Barber said. "Running the football and playing [great] defense."

Indeed, not to be outdone, the suspect Giants defense, statistically ranked 31st in the NFL in total yards allowed overall and versus the pass, limited the high-flying Redskins offense to an anemic seven first downs and 125 yards. Washington eked out 38 rushing yards and quarterback Mark Brunell, who looked skittish all day, and replacement Patrick Ramsey, were sacked five times. Of the Redskins' 16 possessions, eight ended with punts, four on turnovers, two on downs, one at the end of the half and the last at the end of the game.

It marked the first regular-season shutout for the New York defense since a 20-0 win over Philadelphia on Nov. 22, 1998, a stretch of 107 contests. Not since a 51-0 lambasting in 1961 had the Giants blanked the Redskins in a regular-season matchup. As powerful as were the Giants, the Redskins were conversely pitiful in every facet of the game, as they lost for a third time in their last four outings.

All those Joe Gibbs apologists, who insisted earlier in the season that the Redskins head coach had merely suffered an aberrational season in '04, might want to consider delaying the canonization ceremony a while longer. Gibbs looked like just some Ordinary Joe on Sunday, and his team was extraordinarily bad, to say the least. The shutout was the first ever against Gibbs in a regular-season contest.

"We didn't play our best," said understated Santana Moss, the Redskins' electrifying wideout, who was held to four catches for 34 yards. "They got on a roll and just trampled us."

No one trampled any harder than Barber, who played only three quarters, retiring after a four-yard touchdown run, just 12 yards shy of the franchise rushing mark.

Barber was most effective running to the left side, and against a Washington 4-3 front, a scheme the New York offensive line absolutely bulldozed. The 57-yard run on the first snap of the game set the tone, not only emotionally, but also schematically. When the Redskins were in a four-man front, which they played on 80 percent of the Giants' 78 offensive snaps, New York most often ran left, to the weak side, and at Washington right end Phillip Daniels and right tackle Joe Salave'a.

By unofficial count, Barber gained 181 yards off the left side and his backups, Derrick Ward and Brandon Jacobs, added 46 yards going left. So of the Giants' 262 yards on the ground, 227 came when running behind the left side tandem of tackle Luke Petitgout and guard David Diehl. In addition to the opening run, Barber added bursts of 59, 14 and 18 yards, all to the left side.

The opening play, Barber revealed, came off a suggestion by middle linebacker Antonio Pierce, who defected from the Redskins after a standout 2004 season to sign with the Giants as an unrestricted free agent. Pierce told the coaches that the Redskins' defense likes to choose five frequently-run plays it feels the opposition will start the game with, and will over-defend them. The run by Barber, on which he got solid downfield blocks from his wide receivers, was one the Giants had not used much in 2005.

Barber was certainly one of the more emotional Giants players during the week and that carried over as he took the field on Sunday afternoon. In fact, emotion was obvious in the partisan crowd, and was further stoked when Mara's granddaughter, Kate Mara, sang the national anthem, wearing a No. 89 team jersey (Mara's age when he died) and with his nickname, "Duke" emblazoned across the back. Kate Mara was surrounded by the rest of the Mara grandchildren.

When the game began, however, the Giants were able to operate with total dispassion, and simply played a far more physical game than did the Redskins, who appeared out of step, out of sync and, certainly, out of answers.

In fact, only a pedestrian outing by Giants quarterback Eli Manning (12 of 31 for 146 yards, with one touchdown pass, an interception, and a 51.3 efficiency rating), and New York's inability to cashier red zone opportunities kept the final score from being even more embarrassing.

New York began five of its 15 offensive possessions in Washington territory, had 10 series commence beyond its own 40-yard line, and averaged the 44-yard line as a starting point for its drives. The Giants had an amazing 47 snaps inside Washington territory, and 22 of those were in the red zone, but five times settled for Jay Feely field goals.

Not that the lack of finishing touch much mattered, since the Giants' defense was so stout against a miserable Washington offense, which fashioned just one scoring opportunity.

Washington ranked No. 2 in the NFL in total offense entering the game, had rung up 52 points against San Francisco last week, and was facing a Giants secondary that has been more than generous much of the season. But the Giants took away Moss most of the day, with three of his four receptions coming against zone coverage, and Pierce ensured that tailback Clinton Portis (four carries for nine yards) never got going. Portis actually had more receiving yards (13 on three catches) than rushing yards.

And, apparently, Brunell, who seemed to have located a fountain of youth after looking old, tired and slow the past two seasons, left his magic elixir at home. Harassed much of the day by New York ends Osi Umenyiora (two sacks, four tackles, a pass deflection and a fumble recovery) and Michael Strahan (four tackles and a sack), Brunell never looked like he knew where to go with the ball.

And with the Giants seemingly moving to a lot of "over" and "under" fronts -- it appeared to protect Umenyiora and tackle William Joseph -- the Redskins quarterback in particular and the offense in general were confused.

"Take the run away from those guys," said Pierce, who finished with 11 tackles and an interception, "and you take a lot of team out of them. They lose some energy."

Energy was something the Giants, who play at San Francisco next week and could be a real threat to end Philadelphia's divisional reign, had in large doses. But it was also a component, delivered by the memory of their late owner, they found a way to channel. In an emotional but somewhat subdued locker room, coach Tom Coughlin and his players presented the game ball to Mara's son, executive vice president John Mara.

"It was a hard week," said Shockey, who, despite his maverick persona, was one of Wellington Mara's favorite players. "But we found a way to settle ourselves down. I mean, I wanted it to be an exceptional game for me, and I was feeling pretty bad at the half, because I hadn't done anything. Then I just told myself, 'Just go out and play some football and try to make some plays.' I think that's how we all reacted."