Not since 2001, when Gregg Williams took over the Buffalo Bills, has the coordinator of the NFL's top-rated defense one year been elevated to head-coach status the next. Before Williams moved from Tennessee to Buffalo, the last assistant to make the jump from coordinator of the No. 1-ranked defense to head coach the following campaign was Dave Wannstedt, with the Chicago Bears in 1993.

So, even as the recent trend seems to be skewing toward the defensive side of the ball when owners opt to change sideline bosses -- six of the last 10 permanent head-coaching hires have been men whose primary expertise is on defense -- stewarding the league's No. 1 unit hasn't always translated into instant candidacy.

Just ask men like Mike Zimmer, Tim Lewis, Ted Cottrell and John Marshall, all of whom served as coordinator of a No. 1-ranked defense over the past eight seasons, and none of whom was able to parlay that accomplishment into a head-coaching gig. 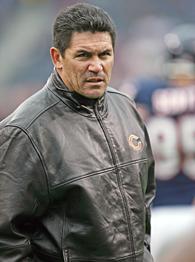 However, that should change in the next few months.

How come? Because it certainly appears, given its performance over the first dozen weeks of the 2005 season, that the Chicago defense will statistically rate as the NFL's best. And judging from opinions solicited from officials at high levels of the decision-making process, largely from clubs that will consider a head-coaching switch after this season, Bears coordinator Ron Rivera will be a coveted candidate.

In a league that seems to be suffering through a dearth of so-called "hot" coordinators this season, Rivera's rise on the head-coaching candidate rumor mills has mirrored the ascent of the unit over which he presides. A one-time Bears linebacker, and a backup on Chicago's 1985 Super Bowl XX team, Rivera is in just his second year as a coordinator and his ninth season as an NFL assistant. But over a relatively short period, he has paid his dues -- starting as a quality-control assistant with the Bears in 1997, moving on to Philadelphia as a linebackers coach in 1999, and then landing the coordinator position in Chicago in 2004 -- and, just as important, people in the right places have paid attention.

From his bosses past and present and, probably more important, from his players, Rivera, 43, gets high grades.

"He's smart and very [detailed], really direct in his dealings with guys, but still a coach who is a good listener, who [solicits] input and doesn't think his way is always the only way to do things," said Bears defensive end Alex Brown. "Guys like playing for him."

That last element can never be underestimated because, no matter a coach's acumen in the realm of X's and O's, few head coaches succeed in the NFL now unless they possess some compelling component of their personality that drives and motivates the men under their command. Don't believe it? Just consider the case of Steve Mariucci, who can probably fill up a dry-erase board with enough diagrams to make your head spin, but who lost his job Monday because some Detroit Lions players, having decided they no longer wanted him around, tossed him under the wheels of an F-150.

It hasn't hurt Rivera, of course, that the Chicago defense has been one of this season's surprising stories and that the aggressive unit is justifiably commanding national attention. On the flip side, it wouldn't help Rivera if he were a man of little substance, but people who know him well insist this is not the case. Those familiar with Rivera off the field contend he will dazzle owners and general managers in interviews with his knowledge of the game, his demeanor, personality and obvious leadership qualities.

"The fact is," said one owner who likely will contemplate a head-coaching change after this season, "he's going to be on a lot of short lists."

Who else will be on those short lists as the NFL's firing-and-hiring period swings into gear in less than two months, with predictions that as many as six to eight franchises will make changes? Count on a number of defensive coordinators, since 25 of the 38 coaching hires since 2000 have come from that side of the ball. Look for a few candidates who are currently college head coaches, too, and some recycled coaches, guys who might lose their jobs in the league but resurface at a new address.

A few names, in no particular order, to consider:

• Pete Carroll, head coach, Southern California: A third national championship would go a long way toward purging the memories of his past two NFL positions (with a combined record of 34-33) as head coach of the New York Jets (1994) and New England Patriots (1997-99). The knock against Carroll in those NFL jobs was that he was a little too cozy with players and not organized enough, but you don't hear those issues raised quite as much as you once did. It will take a handsome contract and considerable control to pry Carroll away from the college game and convince him that the third time around in the NFL will be a charm.

• Cam Cameron, offensive coordinator, San Diego Chargers: Like Rivera, one of the few hot names among current league coordinators. He's got a tight end who is redefining the position (Antonio Gates) and arguably the NFL's most explosive force (LaDainian Tomlinson), but someone is pulling the right strings and someone turned quarterback Drew Brees into a winner. Cameron had a miserable tenure as a college head coach at the University of Indiana (1997-2001), but league people know how difficult it is to win at a school more famous for its basketball team.

• Gregg Williams, defensive coordinator, Washington Redskins: In his three seasons as the Bills' head coach (2001-2003), Williams compiled a 17-31 record and never had a winning campaign. But he has a tremendously fertile mind and is meticulously detailed, and a lot of guys with lesser résumés have gotten encore opportunities in the league.

• Brad Childress, offensive coordinator, Philadelphia Eagles: There are some misguided souls who point out that Childress works for an offense-oriented head coach in Andy Reid and that the Eagles have another terrific offensive mind, Marty Mornhinweg, as their assistant head coach. Being surrounded by such an offensive galaxy, however, should not diminish what Childress has wrought in Philadelphia. He's long overdue for serious consideration.

• Jim Schwartz, defensive coordinator, Tennessee Titans: Finished as the runner-up to Mike Nolan for the San Francisco job in the offseason and was very impressive in his interviews with the 49ers' brass. Schwartz is one of the new-breed Billy Beane-type disciples, heavy into computer analysis, definitely in tune with his players. He often gets overlooked in discussions of potential candidates, but NFL people know more about him than does the public, and it's just a matter of time until he lands a head-coaching job.

• Russ Grimm, offensive line coach, Pittsburgh Steelers: It's a very short list, indeed, of guys who have become NFL head coaches without first being coordinators, but Grimm could make such a leap. He had a superb playing career and is a Hall of Fame candidate. He gets along well with players but also possesses the disciplinarian style some teams will be seeking. And he has interviewed well for the two posts for which he was recently a candidate.

• Kirk Ferentz, head coach, University of Iowa: All he has to do is wink and he'll have teams lined up at his door. A former Cleveland Browns assistant, Ferentz already knows the NFL ropes, so there wouldn't be as much culture shock for him as there might be for some other college head coaches. He runs a top-notch, no-nonsense program, his teams typically play beyond their abilities, and he annually turns out solid NFL prospects. He maintains, however, that he is more than satisfied with his current situation.

• Jerry Gray, defensive coordinator, Buffalo Bills: The former NFL cornerback is an avid student of the game and has learned from some of its top defensive mentors. Gray connects well with players but doesn't allow himself to get too close, and his name is already being whispered in precincts such as St. Louis and Houston.

• Gary Kubiak, offensive coordinator, Denver Broncos: His name circulates virtually ever year, but Kubiak continues to rebuff overtures. At some point, though, when you say "no" so many times, suitors finally quit asking. Kubiak, who may not be as hot a commodity now as he was a few years ago, could be nearing that point.

• Mike Singletary, assistant head coach/linebackers, San Francisco 49ers: The Hall of Fame middle linebacker exudes class, integrity, leadership and just about everything that is good about the league. The only downside is that Singletary, who for years worked in the business sector and was a huge success as a motivational speaker, is only in his third season as a coach, and that lack of experience will be a factor with some teams.

• Karl Dorrell, head coach, UCLA: Realistically, probably a few years away from being a top NFL candidate, but he could accelerate that time frame if his Bruins were to upset archrival Southern Cal this weekend. The former Denver Broncos wide receivers coach is said to have significantly matured over the past two years, really grown into the job, and there is a definite curiosity factor about him from some NFL franchises.

• A few others to consider: Assuming that current head coaches Mike Martz (St. Louis), Dom Capers (Houston), Jim Haslett (New Orleans) and Brian Billick (Baltimore) lose their jobs, some will be considered for other NFL openings. Haslett is especially popular in some league circles, and he and Martz probably would have the best chances of quickly rebounding from among this group. Kansas City offensive coordinator Al Saunders is felt, in some quarters, to be the heir apparent if Dick Vermeil retires from the Chiefs. Defensive coordinators Donnie Henderson (New York Jets) and Tim Lewis (New York Giants) would be candidates in some places. And don't overlook a man like Sylvester Croom, the longtime NFL assistant who took over a mess of a college program at Mississippi State and, while not notching a lot of victories, has restored order and respect.