INDIANAPOLIS -- For the record, his football cleats are a size 13, which means that Indianapolis Colts first-round tailback Joseph Addai should be able to fill just about anybody's shoes.

Yeah, maybe even the super-sized figurative footwear of Edgerrin James, the leading rusher in franchise history, who defected to the Arizona Cardinals this spring as an unrestricted free agent.

"Really, I'm just trying to be myself and, hopefully, do the things I do well. There's a lot to learn. I mean, it's not like my head is spinning yet, and I've been able to pretty much stay on top of the (playbook) so far. But I know there are things I have to correct"
-- Joseph Addai

The former LSU standout and 30th prospect chosen overall last month hasn't been anointed formally -- at least not yet -- as James' successor. The official party line at last weekend's full-squad minicamp here was that Addai will split the position, for the time being, with five-year veteran Dominic Rhodes. But here's an indication as to how the Colts' brass views the potential of their new running back: Addai didn't get James' former uniform, No. 32, but instead was issued No. 29 by the equipment staff.

That's a number which used to belong to one of the other most memorable tailbacks in the Indianapolis era of Colts' franchise history, Pro Football Hall of Fame runner Eric Dickerson.

Big shoes to fill. Big expectations. But the Colts feel that Addai, whose physical dimensions (5-feet-11 3/8, 214 pounds) uncannily mirror those of James, has big enough talent to keep the Indianapolis running game a viable one.

There have been suggestions that the Colts had at least three tailbacks ranked ahead of Addai on their final draft board -- Reggie Bush of USC, naturally, Minnesota's Laurence Maroney and DeAngelo Williams of Memphis -- and that general manager Bill Polian attempted to trade up for one of them. But Polian insisted after selecting Addai that the Colts had decided on draft eve that he was their guy. And certainly no one seems disappointed with the selection of Addai, who came highly recommended by Miami Dolphins coach Nick Saban, the man who recruited him to LSU.

"Of all the running backs in that (elite) group," said coach Tony Dungy on the first day of last weekend's minicamp, "Joseph was the guy we felt could do all the things you have to do to play in our backfield."

Since the franchise relocated here from Baltimore in 1984, the Colts have featured three great tailbacks: Dickerson (1987-91), Marshall Faulk (1994-98) and James (1999-2005). Whether the unassuming Addai can carve out his own niche in such a galaxy, and add to that litany of superb runners, remains to be seen. Certainly he is not as flashy as any of that trio off the field, still feeling his way around the locker room, cognizant of the fact that rookies are meant, at least at this juncture, to be seen and not often heard.

Vying for playing time on a depth chart that already has one tailback, Domanick Davis of the Houston Texans, in the NFL, and which also figures to send Alley Broussard and Justin Vincent into the league next year, it was Addai who stood out most.

Mention that to Addai and he shuffles his feet and manages only a thin grin.

"Thank you, but there are a lot of good backs (at LSU), a lot of really good backs," Addai said.

His smile is a quick one, but lacks the trademark golden grillwork of James. He lacks James' dreadlocks, too, and he isn't apt to fill a notebook with memorable quotes, as his predecessor frequently did. Rhodes, the nominal starter, suddenly has begun referring to himself in the third person ("Dominic's goal is for Dominic to lead the league in rushing," he said before Friday afternoon's practice), for some inexplicable reason. Addai, on the other hand, barely regards himself as a person on this team yet, despite his clear importance.

"Really, I'm just trying to be myself and, hopefully, do the things I do well," said Addai, a Houston native whose parents emigrated to the United States from Ghana about a year before he was born. "There's a lot to learn. I mean, it's not like my head is spinning yet, and I've been able to pretty much stay on top of the (playbook) so far. But I know there are things I have to correct."

Fortunately, for the Colts, Addai appears to be a quick learner. And an even quicker runner.

In the Friday afternoon practice at the Colts' indoor facility, Addai actually slid about six inches too far to the right during a rudimentary handoff drill, and Peyton Manning was unable to make the exchange on a sprint-draw play that is one of the staples of the Indianapolis running attack. In the next two practices that ESPN.com witnessed, Addai never repeated the footwork error. Manning, who already has grown weary of the media's desire for daily updates on the progress of Addai, noted that the first-rounder rarely made the same mistake twice.

Addai's receiving skills, lauded by Manning, are obvious. Unlike some running backs, who seem to fight the ball into their hands, Addai snatches it out in front of his body. And he possesses more explosiveness in the secondary and more "long speed" -- traits that jumped out on the second day of the minicamp when Addai performed every task with more confidence than he did on Friday -- than James has. There is a bit of Dickerson in him, in that Addai runs notably upright, that his cuts are seamless and his feints effortless.

Said Polian, on draft day, of Addai's "suddenness" when he breaks into the secondary: "He's what we haven't had here in a while in terms of taking an eight-yard run that's blocked (well) and turning it into a 22-yard run. He can do that."

During the seven-year tenure of James, the Colts only once ranked among the league's top 10 rushing teams. Outside of the 2001 season, when Indianapolis was No. 7 in rushing offense, the Colts never rated higher than 15th. But the Colts rely on the running game for balance and Manning is not shy now about pounding the ball when defenses back off the line and drop seven or eight players into coverage. And so maintaining the level of the running game is a key for a team that again harbors Super Bowl aspirations.

While Rhodes is on-board, and the roster also includes journeyman James Mungro, the suspicion is that Addai will play quickly if he can assimilate the offense. Rhodes rushed for 1,104 yards as an undrafted college free agent in 2001, the year that James went down with a torn anterior cruciate ligament, but has totaled only 529 yards in the four seasons since then, and seemed tentative at times in 2005. And so the Colts, who publicly espouse the possibility of a tailback-by-committee arrangement but privately know such an accommodation historically doesn't get a franchise to the Super Bowl, see Addai as a serious contender for eventual feature-back status.

Addai is taking the opportunity pretty seriously, too. 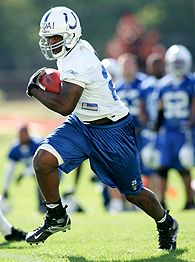 A devout young man of Episcopalian upbringing, Addai works hard, seems to even listen hard, if that's possible, when running backs coach Gene Huey offers instructional nuggets at practice. There seems an innate seriousness about Addai that suggests studiousness and diligence and, with a playbook that is as thick as the Colts' offensive manual is, those are necessary attributes. But perhaps the most necessary requisite Addai will need to get onto the field, and eventually to gain the top spot on the depth chart, is the ability to pass protect.

More than his running skills, it was James' knack for determining where the free blitzer was coming from, and making an adjustment to pick him up, that will be missed in the Indianapolis offense. It was, except perhaps to Manning and the Colts' offensive line, a much overlooked facet of James' arsenal. Manning said this weekend there have been no changes so far in the blocking scheme to compensate for James' departure, and that means Addai will bear some responsibility for keeping the Colts' quarterback perpendicular in the pocket.

Indeed, their regard for Addai's blocking skills -- he played some fullback in an LSU career that also included a brief stint at wide receiver -- are one reason the Colts believe so steadfastly in him. Query him about his ability to serve as a part-time bodyguard for Manning and Addai's dark eyes, which express far more about him, it seems, than he does with words, grow big.

If he is not quite awe-struck by Manning, and by the surroundings in general here, Addai still is adapting to his new environment. His brother, Jeffery, a student at Texas A&M, instructed him to return home from the minicamp and organized team activities that follow it with one key bit of inside information: how Manning became so adroit at play-action fakes.

"I'm watching closely to see how he does it," Addai said. "And I'm sure that (Manning) and everyone else here is watching me pretty close, too, to see how I do."