ATLANTA -- He was one of the toughest, nastiest SOBs that I have encountered in 28 years of covering the NFL, a man whose menacing scowl could seemingly strip paint from a wall, and who reveled in his own brute physicality and took glee from imposing his strength on others. 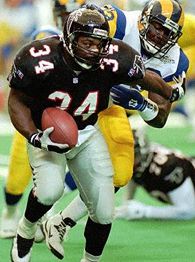 Yet Heyward, who died on Saturday at the too-young age of 39, and after a seven-year battle with an insidiously recurring brain tumor, also possessed a rarely witnessed side that belied his famous nickname.

It was a handle he relished, bestowed upon him back on the hardscrabble side streets of his native New Jersey, first because Heyward possessed one of the biggest noggins anyone had ever seen, and later because he ran and blocked like a man with, well, a head fashioned from iron. It became the common mode of addressing Heyward, a handle that replaced, for most friends and even casual acquaintances, his given name. And Heyward enjoyed, sometimes to his detriment, trying to live up to that familiar nickname.

Me? I can honestly say that, on those occasions when I encountered Heyward early in his career, and then in the three seasons he played for the Atlanta Falcons (1994-96), during which I was the beat reporter for the Atlanta Journal-Constitution, I never once employed the Ironhead moniker. Try as he might to make me say it, I never used it except in a story, and actually flaunted to him my acumen for verbally avoiding it.

I felt, as I explained one day to a puzzled Heyward, that the nickname was borderline denigrating, like a reference to his hard-headedness. And he was, in many ways, incredibly hard-headed. But as his manner of death ironically reinforced -- his supposedly impenetrable head invaded by a tumor known as a chordoma, a particularly pervasive cancer that wrapped itself around his brain, so much so that surgeons were unable to remove all of it during two procedures -- Heyward wasn't always an Ironhead.

"Imagine this," former NFL quarterback Bobby Hebert, a teammate of Heyward's in both New Orleans and Atlanta, told me a couple weeks ago, "me sitting there spoon-feeding Ironhead his lunch. I went to see him and, my God, he looked nothing like the guy we knew as a player. Ten years ago, you could never imagine 'Head' in that kind of shape. But that's what the tumor did to him."

What the tumor, and a related stroke, did to Heyward was leave him partially paralyzed, blind and partly deaf. He was barely ambulatory, spending most of his time in a wheelchair, and when surgeons determined they could do no more for him, Heyward went to a hospice to live his final days, a tough and menacing man no more.

But two things even a decimated Heyward retained, Hebert said, were his dignity and his sense of humor. On what would be Hebert's last visit to see him, Heyward mumbled a few jokes, managed to communicate a couple bawdy stories. "He could still smile with his eyes and, if something was especially funny, he'd get to shaking pretty good," Hebert said. "And, man, he loves his kids."

Truth be told, Heyward loved most kids. Especially, I'm guessing, if they promised not to grow up into reporters.

Good friend Fred Kalil, the longtime sports director for the local NBC affiliate here, and himself a brain tumor survivor, can speak for hours about the times he accompanied Heyward to visit children stricken with brain cancer. Kalil would often arrange for Heyward, once it got to the point where he could not get around anymore, to attend the annual golf tournament benefiting the Atlanta-area brain tumor patients.

And when Kalil found it difficult to reach Heyward by phone, or lost track of his whereabouts, he usually phoned the player's former agent, Jack Mills, a patient and sainted man who stuck by Heyward during the most difficult times of his career, for information on his condition.

Said Kalil: "Just once, if you could see Ironhead when he's around those kids ..."

Of course, regrettably, I never did. But to me, his soft touch with kids was, and will always remain part of why he was Craig Heyward, not Ironhead. And why he will probably always remain one of the most enigmatic players I've encountered on this three-decade journey through the league.

Why so? Well, in regarding Heyward, most people viewed him as a Mike Tyson-type figure, a man who used his size and his reputation -- yeah, dare I say it, his blackness, at times -- to rattle them. He was the player who came closest to permanently turning out my lights, charging me in the Falcons locker room one day early in the 1996 season, because he felt I had unfairly suggested that Jamal Anderson was close to taking away his starting job. Thank goodness cornerback D.J. Johnson stepped in his way, and somehow did what few defenders ever could on the field, stopping Heyward in his tracks. Given his 20-feet head start, Heyward might have put me six feet under had he connected.

That frightening incident aside, for whatever reason, probably dumb luck, I was able to get Heyward to plumb the depths of his being, to discuss his vices, which were many, and in those instances he became as harmless and innocent as the guy on those Tyson Chicken commercials.

Heyward was not exactly a loveable figure, but there were times, when he was regaling teammates with all kinds of tales, that people loved being around him. Craig could be downright mean-spirited. But when he was roaring with laughter, when he didn't necessarily feel compelled to live up to the Ironhead persona, his love-of-life spirit defined him.

There was, in Ironhead, a surprising malleability at times. When one succeeded in getting him to let down his guard, and those occasions were infrequent, there was actually a softness. The provocateur in him could turn playful. As a player, Heyward was blessed with what scouts and coaches call "little man's feet," an incredible deftness and cutting ability rare to men of his size. As a person, I can attest, he was also blessed with a little boy's heart -- at least when he permitted outsiders to see it. And his candor, when he chose to open up, was amazing.

He chose, in early August 1994, shortly after the Falcons signed him as an unrestricted free agent, to allow me some insights into his life and it became one of the most memorable interviews of which I have been a part. The subject was his sobriety -- Heyward had gone, at that point, 221 straight days without a drink -- and he sat for an hour on a bench outside the Falcons locker room and recalled the last time he crawled into the ring against his most powerful demon.

It had been the previous New Year's Eve and, at Morton's Steak House in Chicago, Heyward had hosted a bash for some Bears teammates. Beyond some thick steaks, the night included, Heyward recalled, "... a little Cuervo Gold. A lot of red wine. Plenty of what I refer to as 'Miller-Lite-waiter-and-keep-'em-coming.' An aperitif or two. All topped off at midnight by a few bottles of expensive champagne."

It was a night, Heyward acknowledged, on which his two primary vices, food and booze, got the better of him. And there were, he allowed, a lot of nights like that during his career. It was a career that, while good, wasn't nearly as brilliant as it might have been. Heyward never played 100 percent to his potential, in part because he was usually affected by something with a 100-proof label on it.

"I kept building up a wall out of bottles and cans, and suddenly, I couldn't get out, and no one could get in, either," Heyward said. "I couldn't relate to people at all, except in the [drinking] environment. My social behavior was kind of all based on my buzz. I became sort of a clown, a caricature, and my weight got out of control. My priorities were a mess. It used to be that, when I looked inside my head, it was like I was behind enemy lines, you know?"

He wasn't such a tough guy that day, Craig Heyward, just a man who had stumbled into a confessional of sorts, in desperate need of catharsis and a friendly ear.

On the field, though, few were tougher. Hebert and I laughed a couple weeks ago -- for about the millionth time, it seems -- at the memory of Heyward, when he was playing with the Saints, flattening Falcons safety Scott Case on a run up the middle in the late '80s. As scrawny as he was, Case was no shrinking violet, yet the runaway Heyward mowed him down like a scene out of a Roadrunner cartoon. The self-deprecating Case, said Hebert, still gets a laugh out of it.

Hebert also recalled the time, during a game in 1988, when Heyward hit Seattle linebacker and alleged tough guy Brian Bosworth so hard he made him cry. According to Hebert, then-Saints coach Jim Mora called the same off-tackle play six straight times, with Heyward as the lead blocker. "After about the third time," Hebert said, "Bosworth was crying. Honest. Tears were rolling down his face, because he didn't want Ironhead to hit him anymore. He cried 'Uncle!' for real. Ironhead, he just laughed at him."

Blessedly, Heyward was able to laugh at himself, especially once he beat his battles with the bottle. And in his waning days, it seems, he retained his ability to laugh and make others smile.

On his final visit to his old friend, Hebert and Heyward were talking about their oldest sons, both of whom are exceptional football players and are being recruited by big-time college programs. Heyward told Hebert of a call he had received from University of Pittsburgh coach Dave Wannstedt, attempting to recruit his son Cameron, who just completed his junior season at suburban Peachtree Ridge High School.

Wannstedt had helped direct Heyward to Pitt, his alma mater, and in 1993 was his head coach with the Chicago Bears. That year, Wannstedt fined Heyward a total of nearly $200,000, because the fullback's weight had ballooned to an all-time worst 328 pounds. So when Wannstedt phoned recently to see if he might engage Heyward in helping convince Cameron that Pitt was the place for him, Craig Heyward recalled the hefty fines from 1993.

"He said, 'Coach, remember all that money you find me back in '93? Well, you return that $200,000 and I'll send Cameron up there to play for you.' Can you imagine?" said Hebert. "Even as bad off as he was at the time, and this was just a few weeks ago, he was still sharp enough and funny enough to come up with that comeback to Wannstedt. I mean, that was vintage Ironhead, right?"

Yeah, no doubt, but I prefer to think of it as vintage Craig Heyward.