Born and raised in Las Vegas, where both his parents worked in casinos, Steven Jackson realizes the unique relationship between numbers and odds.

OK, so the St. Louis Rams' third-year tailback might not be the guy you want advising you at the blackjack table, as you're agonizing over whether to take another hit while holding 16, and his head usually spins over all of the confusing permutations of the roulette wheel. The fact is, if Jackson is down $100, he pretty much considers himself tapped out and heads home for the evening.

But here's a winning parlay he understands well after only two NFL seasons: Give Jackson 20 carries, he'll get 100 yards, and the odds are pretty solid that the Rams will win.

"I know what they're telling me in terms of how many carries they say I'm going to get. But I've heard those kinds of things before. I even went to [running backs coach] Wayne Moses the other day and told him, 'Now don't be teasing me. Don't be telling me what you think I want to hear just to pacify me.' "
Steven Jackson

"Now those are numbers," said Jackson, the Rams' first-round choice in the 2004 draft, "that are like magic numbers to me. Even I'd bet on those. And I'm not a very big gambler. I can't run with guys like [Charles] Barkley and that crowd. But, yeah, I know that those [represent] some winning numbers."

Five times in his still fledgling NFL career, Jackson has logged 20 or more rushing attempts in a game. The results in those contests: an average of 130.6 yards per outing, 5.4 yards per carry, and five victories for the Rams. Of the team's six wins in 2005, half came in games in which Jackson was the offensive workhorse. Only once in the five contests in which Jackson got 20 carries did he fail to crack the 100-yard mark. Twice in those games, he had more than 145 yards, including a career-best 179 against Jacksonville on Oct. 30.

Roll the dice with Jackson, a big back (6-foot-2, 231 pounds) with quick feet and nifty moves, and the odds are pretty good you won't crap out, as his brief league history indicates. And if offseason rhetoric emanating from first-year coach Scott Linehan means anything, the St. Louis offense expects to roll a whole lot of 7's with its starting tailback in 2006.

Which is sweet music to the ears of Jackson, who often chafed in the past at the lack of carries he got under former coach Mike Martz, dismissed after a 2006 season in which he missed much of the season because of a bout with endocarditis, an inflammation of a heart valve. In 14 of 29 appearances in 2004-2005, Jackson had 10 carries or less, in part because of the presence of future Pro Football Hall of Fame tailback Marshall Faulk, but also, he feels, because Martz lacked faith in him.

The track record of Linehan during his years as offensive coordinator in Minnesota (2002-2004) and Miami (2005) is that he prefers to run the ball first. Make no mistake, Linehan wants a vertical passing game, too, and some felt that with the Vikings in 2004 he fell too much in love with the deep pass, to the overall detriment of the Vikings' offense. That season, though, appears to have been an aberration.

In the Linehan-designed offense, it certainly seems St. Louis will use far fewer spread-type formations and run the ball, specifically with Jackson, a lot more.

Jackson, who won't even turn 23 until just before the start of training camp, has suggested he could get the ball 25 times a game. But a dose of reality here: Extrapolate that over a 16-game schedule and it's 400 rushes, a number reached by just three running backs in NFL history. A more realistic number is the magic 20 carries per game that Jackson covets, and he plans to hold the coaching staff to its promises that he is about to become its offensive centerpiece.

The former Oregon State star, the 24th overall selection in the 2004 draft, rushed for 1,046 yards in 2005. In his mind, he might have piled another 1,000 yards on top of that had he gotten the ball more. And so he hasn't been shy about reminding Rams coaches of the team's 5-0 mark when he gets 20 carries in a game.

"Do I think I could run for 2,000 yards if I got the ball 20 or 25 times a game? I think it's possible," said Jackson, without a hint of bravado. "I know what they're telling me in terms of how many carries they say I'm going to get. But I've heard those kinds of things before. I even went to [running backs coach] Wayne Moses the other day and told him, 'Now don't be teasing me. Don't be telling me what you think I want to hear just to pacify me.' And he reassured me that I'm going to get my carries. But, you know, the proof will be in the pudding. I do think, though, that I'm viewed sort of in a different way around here now. I feel, for the first time, like I've got the confidence of the organization."

That's a sentiment Jackson readily acknowledges he did not experience under Martz's stewardship. As a rookie in 2004, with Faulk still a productive player, Jackson averaged only 9.6 touches per game. There were just three games in which Jackson got more than 10 carries.

"I can understand the loyalty to Marshall, [because] he's been a great player. But a lot of times, I was on the outside looking in, trying to get just a peek at what was going on," Jackson said. "Things are different now. I do feel like I'm out of Marshall's shadow and that this is more my offense now. I know I'm approaching this season a lot differently than I did my first two years. I feel more responsibility and I'm working harder to have the respect of my teammates, and making more of an effort to be a leader. This can be a breakout year for me in a lot of ways."

Provided, of course, the first-year staff doesn't break its promise to him.

Like any back, but especially a big, physical tailback, Jackson is convinced that he gets stronger the more carries he rings up, that his power erodes a defense late in the game. There's some evidence of that given that Jackson has averaged 5.3 yards per carry on his attempts that come after his 20th rush in a game. But he is also a fast starter, a back capable of making a big play early in the game.

In the five outings in which he logged 20 carries or more, Jackson averaged a gaudy 7.4 yards per attempt on his first five attempts. In four of those games, Jackson's longest run came in the opening quarter. In two contests, his longest jaunt was on his first carry. He ran for 28 yards on his first attempt against Philadelphia in a 148-yard performance on Dec. 27, 2004. In a 97-yard game against New Orleans on Oct. 23, 2005, Jackson bolted for 43 yards the first time he touched the ball. Against Houston last Nov. 27, in a game in which he finished with 110 yards, he gained 18 yards on his first carry and then 19 on just his second carry of the second half. 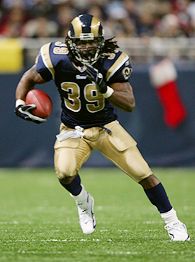 "He's the kind of back who can surprise you with his quickness, right out of the box," said Indianapolis free safety Bob Sanders. "You're thinking, 'power guy,' but then he gets a burst and he's on top of you faster than you thought he could be. If you're not used to him, yeah, he can get on you early and make some big plays. He's strong enough to rip your arms out of the socket but he's faster than you think, too."

Against the Colts last season, in a Monday night game on Oct. 17, Jackson flashed both elements, his raw power and his deceptive speed, carrying nine times for 55 yards in the first quarter, with a touchdown run of 21 yards. But as too often happened to him during his first two seasons, Jackson suddenly became an afterthought, as St. Louis fell behind and he got only eight carries in the final three quarters.

Counting on a more consistent workload in 2006, instead of getting the ball just in spurts, Jackson has spent additional time on conditioning in the offseason. Faulk likely will be back in 2006 but, in his 13th season and coming off a 2005 campaign that was the least productive of his career, is in his NFL dotage now. And so Jackson, who figures to be the man, is doing things characteristic of a player poised for a breakout, including some of the fine detail work he feels can elevate his game.

He has taken of late to sitting with veteran safety Corey Chavous, one of the game's great students, and watching videotape for hours. Chavous has pointed out to Jackson how to read different defensive fronts, how to discern where the overload might be, or from where a blitz might be coming, and where a cutback lane might develop for him.

Jackson has dabbled in some modeling, a career he might want to pursue after football -- "I'm no Tyson Beckford yet, but you never know," he said, laughing -- but most of his offseason was spent preparing to assume a higher profile on the field and tending to his various charitable endeavors off it. His off-field passion in The Steven Jackson Foundation, and its primary emphasis is promoting strong educational values to youngsters in the Las Vegas area.

He will donate $1,000 for every touchdown he scores this season to the foundation and Jackson wants to expand on his two-year-old summer youth football camp. He remains heavily involved with Eldorado High School, his alma mater, with the Las Vegas Pop Warner League and the Bread of Life Church, and he recently donated footwear to The Blazing Ones, a Las Vegas youth track club.

"It's been a city that has been good to me," said Jackson, whose mother, Brenda, was a blackjack dealer at the Hilton and whose father, Steven Sr., was a casino manager at Caesar's Palace. "People think of Las Vegas and they think first about all the glitz. But it's become a really good family city, a terrific place to grow up. Of course, I grew up seeing everything big here, you know? Big productions, big buildings, big lights, big everything.

"And now I'm looking for a big season to kind of make it all complete."