DAVIE, Fla. -- During a break in his first mandatory minicamp a year ago, while questions were being asked about a potentially lackluster Miami Dolphins' offense, head coach Nick Saban wondered whether the collective age of his defense would allow it to remain a premier unit for at least another year.

Saban emphasized that he anticipated the Dolphins defense would still be solid but also noted that most of its best players -- ends Jason Taylor and Vonnie Holliday, tackle Keith Traylor, linebackers Zach Thomas and Junior Seau and cornerback Sam Madison -- were all 30 years of age or more. And he declared that, over the ensuing few years, he would have to begin phasing in younger defenders through the draft.

A year later, let it be duly reported that the greening of the defense has definitely begun, and with Saban's favorite kind of players: Instinctive, active, multi-talented players from SEC programs.

"There's a toughness to being an SEC guy and we're getting that here."
LB Channing Crowder

"I don't think it's surprising that (Saban) likes SEC players," said the teams' 2006 first-round draft pick, Jason Allen of Tennessee, who will start at free safety. "It's what he knows best. He recruited most of us. His teams (at LSU) played against us. Some of us even beat him somewhere along the way. No matter what you do in life, you feel most comfortable being around people that you know pretty well. And Coach Saban, well, he still knows the SEC."

Both of the first-round selections the Dolphins have made since Saban arrived last spring, Allen and former Auburn tailback Ronnie Brown in 2005, are onetime SEC stars. Of the dozen draft picks Miami has exercised in Saban's two years on the job (excluding last year's supplemental draft), five played in what many pundits regard as the nation's premier football conference. Saban had keen insights into two other picks because he had tried to recruit them to LSU.

Another kind of SEC, the Securities and Exchange Commission, would frown on the kind of insider trading Saban has conducted. But the Dolphins' coach knows there is a statute of limitations on the first-hand data he possesses on players from the SEC -- in another year or two his connections with players that he once recruited and coaches he once hired will expire -- and he's taking advantage of it while he can.

Particularly on the defensive side.

Even in the era of free agency, it is impossible to refurbish an entire unit quickly, and so the remaking of the Miami defense is very much a work in progress. But whatever progress is achieved in 2006 probably will be, in part, because of the SEC flavor that Allen and other players from the conference have infused into the defense. Besides Allen, two youngsters from the 2005 draft with SEC affiliations, weak-side linebacker Channing Crowder of Florida and left cornerback Travis Daniels from LSU, will start.

Crowder and Daniels, the latter of whom knows the Saban defensive package so well there were times in 2005 he would have to explain some of the intricacies to veteran players, proved that youth will be served as the Dolphins revamp the unit. More important, they demonstrated that youth can be serviceable, too.

The two actually combined for 27 starts as rookies and played well. Daniels registered 60 tackles, one interception, 14 passes defensed and one fumble recovery. Crowder, whom the Dolphins staff believes has a chance to be a truly special player, rang up 85 tackles, one forced fumble and recovered two fumbles. The kind of diversely talented athlete Saban covets, Crowder can play all five linebacker positions defined in the Dolphins' defensive terminology.

And he plays them all with great energy.

"There is so much you can learn from guys like Jason Taylor and Zach Thomas, and I think all of the young guys take advantage of that," Crowder said. "But I think what we can bring to them, the younger guys here, is enthusiasm. This is still new to us young guys. We haven't been around it so long that maybe it's old hat to us. It's still exciting for us and you can see that in the way we play."

The way the Miami defense played in 2005 was acceptable on some fronts, but there definitely is room for improvement. In Saban's first season, and with Richard Smith as coordinator, the Dolphins surrendered 37 fewer points than in 2004. But the unit allowed two more touchdowns and its statistical ranking, 18th in the league, was the franchise's lowest since 1997, when Miami was No. 26.

From that 2005 unit, there has been a good deal of offseason attrition, with Seau, Madison and safety Tebucky Jones released, and safety Lance Schulters allowed to test the free agent market, where he remains unsigned. The projected starting lineup for 2006 still has five defenders who are 30 or older and two others who are 28. So the youth movement, as is usually the case in the NFL, is a gradual one.

But it should also be an effective one.

"You'd always like to bring in younger (defensive linemen), but sometimes you can't do it," Saban said last weekend, during a full-squad minicamp. "But we got a little younger in the secondary, signing (cornerback) Will Allen in free agency, and drafting Jason Allen. And we feel like we've got some younger players who are ready to step up in other places." 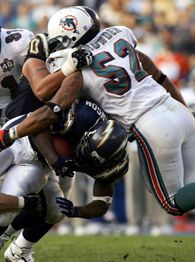 The excitable Crowder, a steal in the third round of the 2005 lottery after concerns about his knees dropped his stock on many franchises' draft boards, is clearly the emerging star of the bunch. As good as he was as a rookie, Crowder should be even better in 2006, not just because he has a season of experience, but also because new coordinator Dom Capers will create more ways to get him around the ball. And the Dolphins expect Jason Allen, who played cornerback and safety at Tennessee, and will be used in the interior of the secondary, to be very good.

Saban noted that Allen's progress might be a bit more incremental because, aligning at free safety means the rookie will have substantially more responsibilities than if the Dolphins played him at cornerback, and because the mental aspects of the position are more sophisticated. But Allen, who chose Tennessee over LSU in the recruiting tug-o'-war for his services because of rumors Saban would leave Baton Rouge, La., for the NFL before he graduated, seems ready for the challenge.

Just watching Allen in minicamp practices, it is obvious how gifted an athlete he is, and how naturally he flows to the action. And to this point, at least, he's been able to keep from being overwhelmed by the size and scope of the Dolphins' defensive playbook.

"You dig into that (playbook) or just listen to (Saban) talk about the defense," said Allen, who seems to be fully recovered from the hip injury that all but scuttled his senior season in 2005, "and you understand what a genius the guy really is. It's like, you're sitting there studying everything in there and you can't help but think, 'Man, does this guy have a life? Does he just eat and sleep football?' He told me when they drafted me that he would make me an elite player in this league. Heck, he told me that when he was recruiting me out of high school. And I believe him, man, I believe him. I can just feel it."

What Crowder can feel, he said, is an SEC mentality taking over on the Miami defense in 2006. There is, said Crowder, who was also recruited by Saban in high school, a merit badge of sorts from having played in the SEC.

"There's a toughness to being an SEC guy," Crowder said, "and we're getting that here."