BALTIMORE -- In the aftermath of a second straight late-game win, one which left the breathless victors gasping as much for oxygen as for superlatives, there were plenty of trite cardiology-related references emanating from the Ravens' locker room.

Eleven-year veteran left offensive tackle Jonathan Ogden, feigning shortness of breath and clutching his chest Fred Sanford-style, spoke of how he was "getting way too old" for such games. Tight end Todd Heap, who scored the winning touchdown on a 10-yard pass with just 34 seconds remaining in the heavyweight battle with San Diego, cited how fast his heart was beating on the last-gasp drive. And weakside linebacker Bart Scott, who did not have a sack for a change but did get the second interception of his career in the first quarter, said he didn't think "anyone on the sideline exhaled" during the Ravens' final possession. 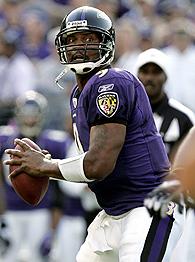 And off in a corner, adjusting his tie as he awaited the post-game interrogation, the calmest person in the locker room was the guy who, thankfully for the Ravens, had been the calmest individual in the Baltimore huddle for a second consecutive week.

"That last drive," said quarterback Steve McNair following the Ravens' improbable 16-13 win Sunday, "was just pitch and catch. It's what the game is about. You can't get nervous in those situations. You have to relax in the final two minutes. I think I'm more relaxed (in that kind of spot). I live for that."

In yet another game, McNair, acquired from Tennessee in a June 8 trade meant to add stability, maturity, leadership and victories like the one accomplished here, proved to be a human defibrillator for the Ravens.

Baltimore moved to 4-0 for the first time since the former Cleveland Browns franchise relocated here in 1996. The Ravens' four-game winning streak is their first since 2000, when they went on to win Super Bowl XXXV.

With the Ravens' pulse still registering on the EKG because of the tenacity of their defense and typically Neanderthal offensive philosophy of Chargers coach Marty Schottenheimer, the veteran McNair brought life to a floundering offense that had managed only five first downs after halftime.

Trailing 13-9 after the Chargers took an intentional safety with 3:12 left in a defensive battle that featured more big hits than big plays, McNair rallied the Ravens 60 yards in six plays. His winning pass to Heap, on a call termed "Spread left, H-motion, Double China, Y-7", culminated a drive on which McNair completed four of five passes for 43 yards and ran 12 yards for a first down.

Baltimore had as many first downs on the final drive as it did on its previous six possessions.

It's certainly not the kind of clutch performance the Ravens got from McNair's predecessor, former first-round pick Kyle Boller. That's one reason Baltimore has been to the postseason just twice since its Super Bowl championship and failed to advance beyond the divisional round since.

With McNair in the huddle, however, all things seem possible -- including a run deep into the playoffs.

"It doesn't always look pretty, you know?" Ogden said. "But he brings kind of a calm into the huddle, especially at the really (difficult) times. He's been around so long, there's nothing he hasn't seen at some point, and so he doesn't get rattled. He's one of those been-there-done-that guys. The guy just does not panic. For an old man, he just keeps getting it done."

Winning, of course, never gets old. And McNair, admittedly invigorated by escaping an ugly situation with the Titans, has taken over a team that downplays his chronological age (33) and embraces his maturity. As well it should, given the results of the past two weeks, games in which McNair overcame some staleness to make big plays down the stretch.

In the Sept. 24 victory in Cleveland, a gutsy 15-14 triumph achieved on Matt Stover's 52-yard field goal with 20 seconds left, McNair drove the Ravens 47 yards on 12 plays in 3:01. On that possession, he completed six of nine passes for 52 yards. In the team's past two victories, McNair has hit on 10 of 14 passes for 95 yards on the last drives, with one touchdown pass, no interceptions and a 95.4 passer rating.

"He's definitely saving his best for last," said tailback Jamal Lewis, who was limited to 34 yards on 15 carries by a San Diego defense that entered the game as the NFL's top-ranked unit. "He just (exudes) confidence in the huddle. It's sort of like, 'OK, here's what we're going to do, no mistakes now, let's just go down and score.' It's one thing to say it. But he's done it two weeks in a row now. And when a guy does that, how can you not believe in him? He keeps bailing us out."

"That last drive was just pitch and catch. It's what the game is about. You can't get nervous in those situations. You have to relax in the final two minutes. I think I'm more relaxed (in that kind of spot). I live for that."
-- Steve McNair, Ravens QB

The hard-played game was one in which the physical defenses kept shackles on offenses that aren't noted for their flair. The teams combined for just 490 yards and 27 first downs and converted only six of 24 third-down tries. Of the combined 26 possessions, 20 netted one or no first downs. The average offensive possession was for a measly 18.8 yards. There were just four possessions, one for each offense, that resulted in drives of more than 50 yards.

But the Chargers, with the ultra-conservative Schottenheimer still reluctant to remove the training wheels in only the third regular-season start for Philip Rivers, squandered opportunities to put the game away. San Diego had five third-down plays on which the yardage to make was four yards or less but converted just one. Kicker Nate Kaeding, perfect entering the game, missed a field goal wide right from 40 yards. The Chargers mishandled the snap on a would-be 52-yard attempt in the fourth quarter, turning the ball over to the Ravens. Rivers attempted only 22 passes.

It is hard to quibble with Schottenheimer's decision to take the intentional safety, particularly given how his defense was playing and the manner it had harassed McNair much of the game. But provided one final opportunity, McNair was confident he would come through, and so were his teammates.

The winning play came when virtually everyone in attendance at M&T Bank Stadium, including the San Diego defenders, seemed to sense the ball was going to Heap, clearly Baltimore's best receiver and a guy who historically has operated well in the red zone. Yet the Chargers used the same "Cover Four" look they had shown earlier and, instead of bracketing Heap, they gave him ample space.

McNair pumped once on the play and, with Chargers' right cornerback Drayton Florence back in the end zone, flipped to Heap at the three-yard line. Heap broke a lax effort by Chargers standout linebacker Shawne Merriman, who tried for the big hit instead of the sure tackle, to score.

"In a situation like that, (Heap) is a guy you want with the ball," Ravens wide receiver Mark Clayton said.

And, as evidenced the past two weeks, McNair is the guy the Ravens want throwing it.

In the team's Saturday meeting, Ravens coach coach Brian Billick showed his club a videotape from the classic 1985 Thomas Hearns-Marvin Hagler fight. In a bout regarded as one of the most brutal and bloody matchups in recent history, Hagler came back from devastating punishment to win the fight in three rounds. Scott referenced the fight in discussing Sunday's victory and suggested that the rough-and-tumble Ravens began to play hard when they "tasted (their) own blood."

They won, of course, when McNair infused their slumbering offense. And they won, Heap acknowledged, because they had the guy delivering the biggest punches at the end.

"In a fight like this one today," said Heap, "you want to be the offense that gets the last good shot in, and you always want to be the guy who gets in the last punch. And we had the right guy throwing that big, knockout haymaker."

Len Pasquarelli is a senior NFL writer for ESPN.com.