As if anyone needed another excuse to argue about the Eli Manning-Philip Rivers trade, even three years after the fact, this week's NFL prime time convergence presented a pretty convenient opportunity to once again debate the merits of the 2004 draft day megaswap of first-round quarterbacks.

Rivers was in front of a national television audience on Sunday night, once again rallying the red-hot and high-octane San Diego Chargers from a huge deficit. And Manning took center stage on "Monday Night Football," playing poorly in a loss at Jacksonville.

Before the two quarterbacks retire, say, 10-12 years from now, there probably will have been thousands of columns penned about one of the most unusual blockbuster trades in NFL history. Frankly, there may have been already. And there will have been millions of words authored assessing the ramifications of the deal and its role in the respective histories of the Chargers and New York Giants.

There was another big trade, though, involving the Chargers and a quarterback of some renown earlier this millennium. And watching Rivers on television from a Dallas airport-area hotel Sunday night, and Manning from the cavernous Alltel Stadium press box Monday, we couldn't help but consider this: Why doesn't the 2001 deal in which San Diego sent the draft rights for Michael Vick to the Atlanta Falcons get much scrutiny anymore? 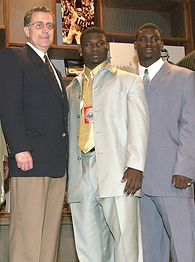 In that trade, the Falcons moved from the No. 5 slot in the first round up to the top rung on the draft ladder and grabbed Vick, the centerpiece player that a floundering Atlanta franchise so desperately required. San Diego? Well, in the fifth spot secured from the Falcons, the Chargers chose a tailback about whom many league scouts harbored doubts, principally because of the veer-style offense he ran at TCU and a basic lack of experience as a receiver and blocker. Some guy by the name of LaDainian Tomlinson.

Which, presto, might explain the dearth of words now spilled over the much-ballyhooed 2001 trade. Because in recent weeks, at least, the trade appears a bit lopsided.

That's not meant to denigrate Vick, who has been as much victimized by circumstance (a dubious offensive design, injuries to himself and his surrounding cast, lack of definition as to precisely what he is supposed to be, wide receivers with hands like Captain Hook's bad side) in six years as by unrealistic expectations.

Yet nearly six full seasons into their respective careers, here's the truth about the two players at the center of the big 2001 San Diego-Atlanta trade: One has become a transcendent football performer, maybe the best in the game, and the other remains a world-class athlete who just happens to play quarterback.

Honestly, if Tomlinson and Vick both retired today, which one has the better chance of being enshrined in the Hall of Fame? Everybody knows the answer to that one.

That could change, of course, and perhaps some day in the not-too-distant future, we'll be rewriting this as one of those oops columns of which every hack is occasionally guilty. But in the here and now, the marvelous Tomlinson is incredible, and Vick, who can be mercurial one minute and maddening the next, is still inconsistent.

It is difficult, often impossible, in fact, to quantify such big trades with statistics. This one is no different.

The Falcons are 45-44-1 (a .506 winning mark) since acquiring Vick, have been a wild card playoff team one time, a division champion once, and advanced to the 2004 NFC Championship Game. Over that same stretch, the Chargers are 46-44 (.511) and won the AFC West in 2004, then lost in their first playoff game. But those numbers aren't quite fair, since Vick didn't start every game since '01, and Tomlinson started all but one.

No one not named Michael Vick expects him to do it all himself. But to ever expect Vick to relegate himself to complementary status, to manage a game rather than attempting to win it with his well-documented athletic arrogance, would be naive, too.

Part of the problem for Vick is that no one seems to know, or to have defined, what he is supposed to be. And he certainly hasn't done a sufficient job, either, of defining himself. He is, essentially, a microcosm for what ails the Falcons, a team which hasn't established an identity in terms of the big picture. In such an environment, Vick isn't so much culpable as he is confounded. And confounding, too.

One minute, he wishes he was still playing in the offense designed by former Falcons coach Dan Reeves, or wishing aloud that he could throw to a receiver like Indianapolis' Marvin Harrison. The next week, Vick is embracing the spinoff West Coast offense in which he has played the past three seasons, or trying to talk up his wideouts, despite their poor hands.

There continues to be, as always, in word and in deed, the continuing inconsistency. At a position that is defined by passing, Vick is a consummate playmaker, not quite the square peg in the round hole, but hardly a comfortable fit, either.

A couple of weeks ago, after sterling efforts in victories over Pittsburgh and Cincinnati, the sense was that Vick might have turned the corner as a passer. Turns out he hadn't yet arrived at the intersection. In Atlanta, the city where I live, the Vick apologists consistently compare him to Peyton Manning, and note that the two have the same number of Super Bowl rings in their safe deposit boxes.

C'mon. Falcons president/general manager Rich McKay claimed this summer that he wouldn't take any quarterback, even Manning, over Vick. If he was serious, he ought to be fitted for a straitjacket. When Peyton Manning fails to get his team into the end zone in the waning minutes, as was the case Sunday in Dallas, it's an aberration. But when Vick follows a brilliant outing with a poor one, it's pretty much seen as what is expected from him based on his track record.

As for Tomlinson, well, he's all about making plays, both in and out of the envelope. He runs, he catches passes, he scores touchdowns. Barring an injury, he will obliterate the single-season touchdown record. Oh, yeah, he's also got a better passer efficiency rating than Vick.

Historically, when it comes to trading quarterbacks and tailbacks, personnel people will tell you that it's a no-brainer. Quarterbacks play forever in the NFL and running backs have the briefest shelf life of any position in the league, according to all the NFL Players Association career-span surveys. But in the case of Vick versus Tomlinson, it's a no-brainer, too.

The year the Chargers surrendered the draft rights to Vick, they selected Drew Brees in the second round, and he served them well, until departing in free agency, creating a vacancy for Rivers to fill. So one could argue they didn't miss much at all. Vick helped to save a franchise, fill the Georgia Dome, and he may yet get Atlanta to a Super Bowl, assuming someone figures out if he's fish or fowl.

But the real reason no one debates the 2001 Vick trade? Because, for now, there's nothing to debate.

Michael Vick has two-thirds of the initials, the "M" and the "V," historically assigned to the league's signature performer. But L.T. is more likely to be the MVP.

Len Pasquarelli is a senior writer at ESPN.com.