More than 40 years ago, then-Supreme Court justice Potter Stewart, speaking on pornography, conceded that he could not adequately define the issue being debated in front of him and his eight colleagues. "But," Stewart said, "I know it when I see it."

Same can be said for momentum, which is arguably even harder to identify. 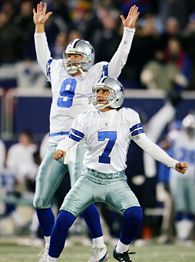 But if you were around the Dallas Cowboys on Sunday evening, squeezing through big bodies and stepping over shoulder pads and rolled up athletic tape in the hole-in-the-wall niche that serves as the visitor's locker room at Giants Stadium, you could actually see momentum. It was there, tangible, palpable, real and undeniable, for everyone toting a tape recorder or a minicam to witness.

Just as important, you could see the manifestation of unbridled confidence, perhaps momentum's most critical byproduct at this juncture of any NFL season. And you could sense that the momentum that's being amassed by the Cowboys, as they roll through the second half of the campaign and head toward the playoffs, is a commodity that could propel coach Bill Parcells' team deep into the Super Bowl derby.

There is nothing quite like a November-December winning streak to stoke the emotions of a talented but young team and to hasten the maturation process. Add to that a wily, veteran coach who is pushing every right button, and whose timely maneuvers have made believers out of whatever skeptics once resided in his own locker room, and it's a formula for success.

"This is the kind of game we used to come here and lose," said tight end Jason Witten, whose 42-yard reception set up the game-winning field goal by refugee kicker Martin Gramatica. "But I can't tell you how much this team has matured this year. How even, after [the Giants] tied the score near the end, how we all just assumed we'd come up with something to win it."

The something with which the Cowboys came up, of course, was yet another huge completion by quarterback Tony Romo, who is 5-1 since replacing Drew Bledsoe as the starter. Then the 46-yard mortar shot from Gramatica, who entered his first game with the Cowboys having converted exactly one field goal, a chip-shot 20-yarder, in the previous 26 months. Romo and Gramatica were both gambles by Parcells. But like the guy who suddenly finds good fortune at the craps table, Parcells keeps rolling 7s.

"He's our Midas right now," linebacker Bradie James allowed. "Everything he touches these days, it just turns to gold, you know? The man has definitely got the hot hand."

Which helps explain why momentum has taken up residency in the Dallas locker room. Not permanent residency, mind you, because that is never the case. Momentum tends to be a drifter, with its bags always packed and an open-ended airline ticket in its pocket. The best any franchise can ever hope for is that momentum at least takes up squatter's rights for a while. Last season, about this time, it booked an eight-week stay in the Pittsburgh locker room and didn't leave until after the Steelers won Super Bowl XL.

Said cornerback Terence Newman: "You just ride the wave as long as you can."

Right now, as the league surfs toward the playoff stretch run, the Cowboys are hanging 10. And there are a lot of playoff pretenders, teams like the Carolina Panthers and the Giants, who are wiping out.

In Sunday's game, New York accomplished nearly everything it wanted to do on both sides of the ball, but it still wasn't enough to pull the Giants out of their nose dive. On Monday night, the Panthers squandered a fourth-quarter lead for the fifth time this season. And, be honest, didn't you sense that quarterback Jake Delhomme, whose on-field petulance has become almost as bothersome as his crunch-time interceptions, would commit another critical turnover?

"What's great about what we have going on here right now is that there is so much faith we're going to do whatever it takes. Some team is going to have to bring its A-game to beat us because we feel good about ourselves. I mean, we've got a lot of faith in each other, as we keep moving forward."
Bradie James, Cowboys linebacker

Here's the difference right now between the Cowboys and just about everyone else in the NFC: Dallas players look at each other and seem to know that someone will make a play. Players everywhere else in the conference seem to be looking at each other cross-eyed right now. If you're, say, a Chicago defender, do you have any faith that quarterback Rex Grossman is going to find a way to put even 10 points on the board? Do the Atlanta Falcons know, on a given week, which Michael Vick will show up in the huddle? Isn't it a little late in the season for Seattle players to be wondering whether the juggernaut offense of a year ago is going to show up again?

An hour after Sunday's victory, Parcells, drained and fatigued, limped noticeably toward a waiting bus. But compared with the broken-down gait of some of the other teams in the NFC at the three-quarter pole of the year, The Tuna looked capable of sprinting 40 yards if he had to.

"What's great about what we have going on here right now is that there is so much faith we're going to do whatever it takes," James said on Sunday evening. "Some team is going to have to bring its A-game to beat us because we feel good about ourselves. I mean, we've got a lot of faith in each other, as we keep moving forward."

And a lot of momentum, too, born of that faith.

In his first law of motion, which essentially deals with momentum, Newton states that bodies in a state of motion tend to remain in that motion unless an outside force is applied. If the last few weeks are any kind of indication, it's going to take a mighty outside force to knock the Cowboys from their current path. This is a team that believes in itself, and is building positive reinforcement on a weekly basis, and that's the kind of political capital that sells well in the NFL.

"Here's what faith and momentum and all that stuff mean," defensive tackle Jason Ferguson said as he stowed his equipment Sunday evening. "When [Gramatica] went out to kick that field goal, and the Giants called timeout to 'ice' him, I couldn't look. That's just me. I was staring up at the crowd, looking at the ground, doing everything not to watch. And then it [occurred] to me, 'Man, the roll we're on, he's going to nail this thing,' and so I looked up and watched the kick.

"And there was no doubt, was there?"