Just 13 months ago, then-rookie head coach Gary Kubiak signed off on the decision by Texans management to exercise a "buyback" clause in the contract of quarterback David Carr, essentially endorsing an $8 million bonus to extend for three more seasons the deal awarded the first player selected in the 2002 draft.

On Thursday, having determined Carr was no longer the Texans' quarterback of the present or future, Kubiak signed off entirely on the five-year veteran QB who is 22-53 as Houston's starter. 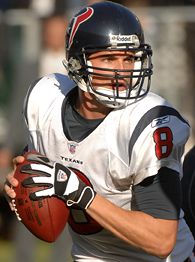 In agreeing to acquire promising but unproven backup Matt Schaub from Atlanta, a guy who has started 73 fewer games than the quarterback he figures to replace, Kubiak finally agreed with the legion of naysayers in Houston who questioned whether Carr would live up to his draft status and press clippings.

Assuming the Texans can complete a new contract with Schaub, and negotiations toward that end had already moved to the substantive stage Wednesday afternoon, Houston will exchange spots with the Falcons in the first round of this year's draft. Atlanta will move up two rungs, from No. 10 to No. 8, in the opening round. And the Texans will also send the Falcons second-round choices in 2007 and 2008.

And then, maybe mercifully, given the beating he has absorbed while being sacked a mind-boggling 249 times during his Houston tenure, Carr will be sent packing.

It will be, as they say, the second shoe to fall in this Houston quarterback carousel.

And what an expensive pair of shoes it has been. A quick accounting indicates that, beyond the time invested in attempting to elevate Carr to franchise quarterback status, the Texans have also paid him slightly more than $35 million. That's more than $7 million per season for an average of 4.4 victories in that stretch, or roughly $1.6 million per win.

Earlier this month, Texans owner Bob McNair was rated by Forbes Magazine as one of the 400 richest Americans, with a net worth of $1.5 billion. If McNair keeps making such lousy investments, he's going to fall out of that elite group and into the poor house.

McNair, though, is essentially the lone remaining member of the braintrust that opted to choose Carr with the top pick in the 2002 draft and then, rather dubiously, to compound the rather dubious decision by paying him the $8 million "buyback" bonus last spring. General manager Charlie Casserly is gone. Ditto head coach Dom Capers and offensive coordinator Chris Palmer.

Known for his prowess in developing quarterbacks, Kubiak didn't hand pick Carr to be his guy, but rather inherited him when he succeeded Capers a year ago. Translation: Because he wasn't responsible for the selection, there was no inherent loyalty to the veteran quarterback.

No matter how many good things Kubiak said about Carr, the words were always going to ring hollow because the new coach could never be held culpable for an expensive decision gone bad. With a one-season body of evidence on which to assess Carr -- and watching a guy from the sideline always offers more empirical wisdom than viewing him on video -- Kubiak could jettison the quarterback and maintain a sense of personal impunity.

As only the second coach to fail to nudge Carr to stardom, Kubiak is basically exempt from all the second-guessing that accompanies such a shortcoming. McNair picks up the tab and Kubiak gets to pick up with a new quarterback. The owner lost $35 million on Carr and all Kubiak suffers is a small loss of esteem, a tiny dent in his reputation as a guy capable of molding even a modestly talented passer into a winner.

Once the Texans locate a buyer for Carr -- and Houston isn't inclined to make the price tag too unpalatable for any team eager to acquire him -- they can move forward. And so can Carr, who can only benefit from a change of scenery. And, hopefully, wherever he lands, from a better offensive line than the one he played behind the last painful five years. Afterall, this used Carr has a lot of dents.

Kubiak is said to be enamored of Sage Rosenfels. The six-year veteran will probably vie with Schaub in camp for the starting job, although the Texans didn't expend two second-round choices for Schaub not to eventually top the depth chart.

Then again, there remains a big hole in Schaub's résumé, the void being the question of just how good the guy really is. In Atlanta, where he won neither of his two starts, Schaub was an all-preseason performer, a quarterback whose reputation flourished by not having to play in the regular season. Most scouts around the league concede they aren't certain if Schaub is the second coming of Tom Brady or the reincarnation of, say, A.J. Feeley.

Schaub, a third-round pick in the 2004 draft and said to be adroit at operating the West Coast-style offense Kubiak prefers, is likely somewhere in between. But at least now, the curious will get to see the truth about Schaub, who became a fan favorite in Atlanta for what everyone felt he could do, not what he actually did.

The move to deal Schaub, who has been the subject of trade rumors for two years, clearly was a pragmatic one by Falcons general manager Rich McKay. Schaub and his agents had let it be known that the quarterback would not sign a contract that took him beyond his free-agent year. Absent such a long-term contract, Schaub would have become an unrestricted free agent after this season. He would have left, and the Falcons would have been left with nothing to show for a valuable trade commodity.

First-year Falcons coach Bobby Petrino, who viewed Schaub's skills as commensurate to that of Brian Brohm, his star quarterback at Louisville, wasn't totally in favor of dealing him. But in the couple months in which Petrino has worked with Michael Vick, in all those quiet and surreptitious passing sessions conducted at team headquarters in recent weeks, the coach has been impressed with his mercurial star. To suggest Petrino is completely sold on Vick would be hyperbole. But the first impression has been good.

And there is this reality: In looking at the current roster, it's obvious the team's personnel isn't nearly as good as advertised. The current scouting department hasn't done nearly as good a job at stocking the Falcons as did former personnel chief Ron Hill, fired nearly two years ago. That disappointing 7-9 record last season was well-earned.

So the Falcons took their most tradeable commodity, a backup quarterback who figured to play very little if Vick stayed perpendicular all season and who would have bolted shortly after the 2007 campaign ended, and turned it into much-needed extra draft choices. Moving up two spots in the first round might not seem like much, but it might be the difference in the Falcons' ability on draft day to land a top player such as LSU safety LaRon Landry or a much-needed defensive end. Plus, netting the additional second-rounder in 2007 means Atlanta now owns three of the top 45 selections.

No matter how much potential Schaub possesses, he was only going to be a clipboard jockey in Atlanta, at least as long as Vick was healthy. And there are plenty of veteran quarterbacks available for the Falcons to sign as a backup, although Petrino and his staff are said to believe second-year pro D.J. Shockley might be able to fill the role.

Look for the Falcons to consider veteran backups such as Anthony Wright or perhaps even Joey Harrington for the No. 2 spot. And here's a name to consider: Former Louisville quarterback Chris Redman, a player with whom Petrino is familiar and whose once-promising career was sidetracked by back and shoulder problems.

The Falcons began to kick around the names of potential veteran backups a couple weeks ago, about the same time they began to listen harder to offers for Schaub. It has long been assumed that the possible suitors in any deal for Schaub would include the Minnesota Vikings, Miami Dolphins and Oakland Raiders. Whether those franchises ever entered the bidding, at least seriously, isn't known.

What is known is that Houston was a team that was never mentioned as a possible entry in the Schaub sweepstakes. That the Texans were the team that finally pulled the trigger on the deal Thursday morning, after several days of intense discussions with the Falcons, was more than a little surprising.

That they did so by essentially ending the Houston career of David Carr, the guy who was supposed to be the face of the franchise, was not.

After all, the $8 million investment Kubiak endorsed a year ago, to extend Carr's contract for three more seasons, didn't come out of the coach's pocket.