PHOENIX -- As son of a U.S. senator, Roger Goodell observed up close the significance of being an effective lawmaker. In less than seven months as NFL commissioner, Goodell has already witnessed, too often it seems, the negative effect on his league of players who are lawbreakers.

And so, using knowledge that he has amassed from both life experiences, Goodell is poised to make a key move by bringing down the law on those players whose off-field indiscretions have become sources of recent embarrassment to the league.

Contrary to most published reports, including by ESPN.com, Goodell will not unveil Tuesday a new and dramatically more strident player conduct policy on which he has been working. There was, following a conference call with national reporters last week, the widespread notion that Goodell would roll out his new policy Tuesday, but the commissioner is not yet prepared to go public with the hard details.

He will, however, present the framework of the policy to league owners gathered for the annual NFL owners meetings here, in part to gauge their reaction to his framework for cracking down on poor off-field behavior and also to prepare them for the inevitable.

"It's a complicated issue and there are no simple answers,"
Goodell said on Monday. "We want to find out
what is working well with the clubs and what is not working, get a
set of best practices so they can implement them on a local
basis."

"We're expecting discipline will be stepped up," he added.

What's coming, probably in the next few weeks, from Goodell: a policy with teeth, one implemented by a commissioner who clearly wants to take a bite out of crime. And likely a bite out of some players' bank accounts.

"He's the new sheriff in town," said Atlanta cornerback DeAngelo Hall, one of the players who, disgusted by off-field player conduct over the past year, huddled with Goodell at last month's combine workouts in Indianapolis to address the issue. "I think, no matter what he decides, it's going to be a no-nonsense, no excuses, no [expletive] approach. And I think most of us realize that's what we need."

The specter of a harsher conduct policy -- an element on which Goodell has spent considerable time sampling opinions from owners, coaches, players, union leaders and even people outside the game -- is the overriding theme of this year's NFL owners' meetings, which convened Monday. Other key issues that will be deliberated before the owners adjourn Wednesday include a proposed change in the overtime rules, the continuing pursuit of an enhanced revenue-sharing policy and the possibility that instant replay will become a permanent part of the game's fabric. 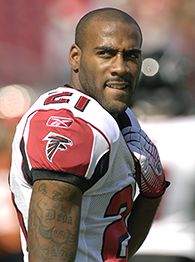 A few agenda items, especially the revenue-sharing issue, could engender fractious debate. But on the urgent need for a new conduct policy, it seems there is unanimity at every level of game. As the owners began to check in Sunday, player conduct was the hot-button issue in the corridors of the resort hotel where the meetings are taking place.

It's fair to say it is an issue that will define this week. And it isn't hyperbole to suggest it is an issue that could define the early years of Goodell's tenure. Before they hustled off for an early round of golf, league and team officials acknowledged Goodell must act decisively to confront behavior deemed subpar by NFL standards.

"We're really no different than any other business," Green Bay general manager Ted Thompson said. "We want people who know how to conduct themselves."

It is probably not the issue Goodell would have guessed might top his to-do list when he inherited a prosperous league from his mentor, former commissioner Paul Tagliabue, last August. But prompted by what most believe is an unprecedented spate of player misconduct -- with approximately 50 players and/or coaches arrested since the start of 2006, and the bothersome off-field conduct of players such Tennessee cornerback Adam "Pacman" Jones and Cincinnati wide receiver Chris Henry -- Goodell has had little choice but to confront the issue head on.

One of the commissioner's top lieutenants noted Sunday that, while "it isn't the only thing he thinks about these days, not quite an obsession, [the conduct issue] is definitely the biggest that is on his mind." And how he reacts, owners understand, is key to how their game is perceived.

"If we want to stay America's game, maintain our integrity and keep the trust of our fans, then, yeah, we've got to do something," Pittsburgh Steelers owner Dan Rooney said. "And I have confidence that we will. Roger has moved this thing to the top of his priorities, and he's sought out a lot of opinions, taken a lot of input from every corner of the game. I know we'll do the right thing."

Precisely what the right thing will be was not altogether clear.

Most owners, including close Goodell confidants such as Rooney, insist they have not been privy even to the nuts and bolts of Goodell's plan. But in a league in which no player has been suspended for more than four games for running afoul of the law, the suspicion is that the commissioner will expand his abilities to mete out much tougher sanctions, particularly for repeat offenders or players whose incidents are especially troubling.

Many in the game believe Goodell will reserve the right to suspend a player for an entire season, with that player then forced to apply for reinstatement, but only after meeting tough criteria. Jones, who has been arrested or questioned by police in 10 incidents since he came into the league in 2005, could be the poster boy for Goodell's get-tough policy.

But there are other candidates. Henry has been arrested four times. He pleaded guilty (three times to lesser charges) in each case. Chicago defensive tackle Tank Johnson, who only two months ago played in Super Bowl XLI, is serving a four-month term for a firearms violation. And just last week, Miami linebacker Joey Porter was cited for misdemeanor battery after Las Vegas police said he punched Cincinnati offensive lineman Levi Jones in a casino. Nine Bengals have been arrested the past two years. There is a belief that one of the components of Goodell's policy will enable him to sanction franchises -- perhaps with fines or the loss of draft choices -- that have repeat instances of player misconduct.

Said one AFC owner: "Not to crucify one team, but the stuff with the Bengals has just been ridiculous. I mean, one after another. They keep saying they're going to do something about it, but every time you pick up the newspaper, it seems like they've had something happen. People are making fun of them. They talk about the 'Bengals' stripes' in another connotation now. Unfortunately, it's not funny to us."

Nor is it funny to most players in the league. One of the reasons Goodell figures to be able to present an initiative that provides him far-reaching clout in determining sanctions is that he enjoys support from NFL Players Association executive director Gene Upshaw and his constituents. The players who met with Goodell in Indianapolis sent a clear message that they want him to clean up their game.

They also want more emphasis, particularly in the wake of the shooting death of Denver cornerback Darrent Williams, on educating players about where they should and shouldn't spend their off time.

Gunned down in a limousine outside a Denver nightclub, Williams paid the ultimate price.

"I've spoken to over 50 players on this issue, and they all
believe leadership in mentoring younger players is important,"
Goodell said. "That's one of the things we'll be encouraging. I'm
supportive of creating a player advisory council that would give me
some input, maybe even into individual cases."

Ensuring that sanctions have real teeth, even if it means stark financial penalties, some players agree, might preclude incidents like the one in which Williams died or other off-field problems.

"He's got to do what he's got to do," said Cincinnati wide receiver T.J. Houshmandzadeh, speaking of Goodell. "Because something has to happen and it has to be big. We're not a league full of thugs, guys who can't control themselves. But that's the image people are getting now, and we've got no one to blame but ourselves. So if a guy has to go away for a year, give up millions of dollars in salary because he can't avoid trouble, well, maybe that's the way it has to be.

"It's time to basically say, 'You break the law, it's going to hurt.' Maybe the commissioner has to become like the 'hanging judge' or something. He knows for the good of the league and everyone in it he has to crack down. And I think, from talking to [Goodell], that's going to be his message."