Were the flood-threatened Noah to be reincarnated as an NFL talent scout, he would have little trouble filling his ark, two-by-two, of course, on draft day this year.

Especially if he wanted to stock up on quality wide receiver prospects.

"He would have enough guys to run [patterns] for 40 days and 40 nights, right?" said Southern California wideout Steve Smith, who with former Trojans teammate Dwayne Jarrett figures to continue his career at the professional level. "From what I could see at the combine, there are a lot of good receivers, some of them from the same programs. It's like the scouts are getting a 'two-fer' or something."

Actually, there are no two-for-one sales in the draft, but league scouts definitely could have contracted a case of double vision in evaluating wide receivers. There have been draft classes in the past that have featured two or more solid wide receiver prospects from the same school. But this year's talent pool -- with Smith and Jarrett, the Ohio State tandem of Ted Ginn Jr. and Anthony Gonzalez, and Dwayne Bowe and Buster Davis of LSU -- has at least three pairs with both players likely to be chosen by the end of the second round. 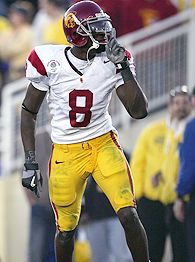 All six of the wide receivers from the three high-profile programs should be starters early in their NFL careers, a few of them perhaps as rookies. Most of the six credit the competitive environment in which they played in college for preparing them for life at the next level of the game.

"When you've got to work hard every day just to be the best [wide receiver] on your team, let alone one of the best in the draft, that naturally makes you a better player," said Bowe, whose strength and size help compensate for modest speed. "There is a certain degree of pride involved. One guy battling another. And I think, when we all move outside our own teams, and we're trying to be king of the mountain and not just the king of the hill in our own backyard, it carries over. No one wants to be a second banana. That's just the nature of the beast at the position."