FLOWERY BRANCH, Ga. -- Displaying wisdom belying his youth, Jamaal Anderson folded himself into a too-small chair after the first minicamp practice of his new career and talked about a critical component of NFL life.

"Sacking the quarterback, that's what they pay you for at this level," said the Falcons' rookie defensive end, demonstrating that he is as quick at grasping the pragmatic nature of some NFL realities as he is at exploding past an offensive tackle. "Stopping the run, that's kind of a bonus, really. I mean, you want to do both, definitely. But getting a sack ... that's a special play."

The Falcons invested the eighth overall pick in the draft on the belief that Anderson is a special player capable of making his share of special plays for a defense undergoing a facelift. He started only 19 games in his three years at Arkansas, but improved exponentially in a breakthrough 2006 junior campaign in which he registered 13½ sacks.

Under new coordinator Mike Zimmer, the veteran assistant hired by first-year coach Bobby Petrino to remake a unit that statistically ranked 22nd in the league last season, the Falcons' defense will have as many as five new starters. None figures to be more important than Anderson. And while the Falcons need Anderson to play the run well, the most important part of his job description is sacking the quarterback.

In a miserable 2006 season in which both starting ends, John Abraham and Patrick Kerney, missed substantial playing time because of injuries, the Falcons managed 37 sacks, right at the league average. But the lack of a consistent pass rush was one reason, although certainly not the lone factor, why Atlanta had the league's fourth-worst pass defense.

Abraham, one of the NFL's premier sackmen when healthy, suffered his annual injury setbacks and missed eight games. Kerney tore a pectoral muscle and was sidelined nine games. Worse, the popular left end, one of Atlanta's key team leaders, bolted to Seattle this spring as an unrestricted free agent.

Instead of the double-digit sacks the Falcons anticipated from both starting ends in 2006, they got only 8½ total from the Abraham-Kerney tandem. And no defender on the roster had more than 4½ sacks.

Enter Anderson, who was officially anointed as Kerney's successor a nanosecond after the Falcons turned in the draft card with his name on it.

Said Anderson on Friday: "Believe me, I know why I'm here."

So do the Falcons, who bypassed a former Petrino protégé, onetime Louisville defensive tackle Amobi Okoye, in the first round. Anderson said that before getting Petrino's call on draft day, he had only spoken with Falcons officials during the combine.

To upgrade over last year's performance on defense, the Falcons need a lot to fall into place, but Anderson providing solid play at left end is one of the keys. Atlanta doesn't have the luxury of providing Anderson a long apprenticeship.

On Friday, when Anderson grabbed the back of his right leg toward the end of a morning session, hearts all but stopped on the practice field. Fortunately, the problem was merely a cramp in Anderson's quad and he missed only a couple snaps.

"We need him out there," said middle linebacker Keith Brooking.

The Falcons also need Abraham, who has missed an average of 4.4 games per season to injury in his seven years in the league. The tackle spots, where veteran Rod Coleman could miss the first week of the season after recently undergoing quadriceps surgery, have to be solidified. 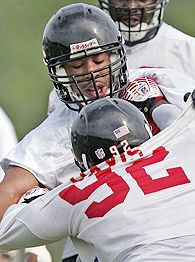 GM Rich McKay has been around long enough to remember when left ends were hardly sack threats. Strongside ends typically were meant to be anchors versus the run, bigger ends with less movement skills, defenders who could take on tight ends and pulling guards and hold firm at the point of attack.

But the game has evolved to a point where strongside ends are expected to get upfield and get after the quarterback. Left ends such as Michael Strahan of the New York Giants, Carolina's Julius Peppers, and even a blue-collar guy like Aaron Kampman of Green Bay, have emerged as big-time pass rushers.

"When we were in Tampa Bay, what we found was that you had to have a way to rush the quarterback with four (defenders)," McKay said. "If you committed more than that, then you weakened your defense in other ways. So we focused on pass-rush skills. That comes first and then playing the run comes second. We think Jamaal can be a really good pass rusher and a pretty good player against the run. And those kinds of guys, especially anymore, are hard to find."

Indeed, in an era when colleges produce a lot of 250- and 260-pound ends, it is hard to locate perimeter players with prototype size. Anderson's size is intriguing.

A former high school wide receiver, Anderson owns a long physique. He checked in at the combine at 6-feet-5 3/8 and 288 pounds, and said Friday his weight is in the 280-pound range. He is built more like a basketball power forward but is plenty strong enough, the Falcons say, and appears able to add 10-15 pounds without sacrificing quickness.

Anderson enrolled at Arkansas at 215 pounds and quickly added muscle when he got into a regular weight-room routine, so he figures to get bigger. And he ought to get better as his body matures and he perfects his techniques.

One of the reasons Anderson chose Gary Wichard to represent him is because the veteran agent's clientele includes noted pass rushers such as Dwight Freeney (Indianapolis), Jason Taylor (Miami) and Terrell Suggs (Baltimore). Wichard's clients comprise a proud fraternity that takes pride in wreaking havoc on NFL quarterbacks and in sharing secrets about how to attack pass protectors around the league.

He has met some of Wichard's other clients, Anderson said, but plans to take advantage of longer tutorials with Freeney and Taylor.

Anderson's athletic gifts are a product of pretty good genes. His father, Glenn Anderson, was a standout basketball player at Gallaudet University, the college noted for its work with the deaf. Glenn Anderson's lot in life -- he lost his hearing at age 6, after a bad reaction to an experimental medication for pneumonia -- provided his son with a sterling example of work ethic and overcoming long odds.

The elder Anderson teaches at Arkansas and works at the school's Research and Training Center for the hard of hearing. For Jamaal Anderson, who learned sign language to communicate with his dad, his family has provided a strong foundation for challenges that lie ahead.