Just three defensive tackles in the league own more sacks over the past five years than Darwin Walker, a proven and extremely active inside pass-rusher who has 26½ quarterback takedowns since the start of the 2002 season.

And it's likely that no NFL defensive tackle feels as unwanted right now as Walker, a seven-year pro who could conceivably find himself traded twice in a span of less than five months. 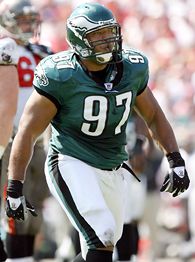 The former Philadelphia starter was dealt to the Buffalo Bills on March 26 during the annual NFL meetings in Phoenix for two-time Pro Bowl linebacker Takeo Spikes. At the time of the trade, in which Buffalo also received a seventh-round draft choice and Philadelphia acquired veteran backup quarterback Kelly Holcomb as a pretty nice throw-in, Walker was attempting to negotiate a new contract with Eagles officials.

Cognizant of Walker's contractual demands, Bills management prudently wrote into the trade agreement an unusual stipulation, first reported by NFL.com last week. The caveat: If Walker, who has two years remaining on the seven-year contract he signed with Philadelphia in 2002, does not report to the Bills' training camp by Aug. 5, he will return to the Eagles and Buffalo will receive a sixth-round draft pick instead.

"They made the trade knowing that [a new contract] had to happen," agent Albert Irby said of Bills officials. "They were aware of where we stood on that."

The possibility of a reversal's transpiring and Walker's being sent back to Philadelphia and left at least temporarily in an NFL no-man's-land increases by the day. And it could well present a fairly intriguing conundrum for both franchises involved.

Buffalo, which has worked hard to upgrade the tackle position over the past two years, needs a penetrating inside defender of Walker's ilk. But the Bills' brass is not inclined to reward Walker, who is scheduled to earn $1.3 million in 2007 and $1.4 million in 2008, with a rich, new contract. The team's best remaining defender, given the offseason departures of Spikes, linebacker London Fletcher and cornerback Nate Clements, is right end Aaron Schobel and he will average only $2.67 million in base salaries over the next three seasons.

So it's not likely that Walker is going to break the bank in Buffalo and get the kind of deal he feels he's entitled to.

And the Eagles, one of the few teams in the league flush at defensive tackle, really have no room for Walker on the roster. And no real desire to have him back in 2007.

Philadelphia coaches plan to start a pair of former first-round picks, Mike Patterson (2005) and Brodrick Bunkley (2006), at tackle. The Eagles also signed unrestricted free agents Montae Reagor and Ian Scott, this spring. Second-year veteran LaJuan Ramsey, a sixth-round pick in 2006 whom the Eagles really like, has added 20 pounds. Philadelphia is so well-stocked at defensive tackle -- a position where it's always tough to achieve depth -- the Eagles released four-year veteran Sam Rayburn, a very serviceable tackle, a few weeks ago.

When the Eagles considered their defensive tackle situation back in March, they decided Walker merited the odd-man-out status. Nothing has changed since then. It will be an oddity, however, if Walker's rights revert back to Philadelphia, because rarely has such a good player at a premium position faced the potential of being so out of place.

And that could lead the Eagles, who had basically soured on Walker and viewed him as a habitual underachiever, to trade the seven-year veteran again.

Would there be suitors? Well, teams are always interested in tackles, but the Eagles would hardly be operating from a position of leverage in terms of demanding compensation. The last thing they want is to be stuck with an unhappy Walker hanging around. It might be easier to satisfy the Eagles' demands, though, than those of Walker, who feels, somewhat justifiably, that he has outplayed the contract he signed in 2002.

But there would almost certainly be a market for Walker, whose offseason might consist of being traded, untraded, and then traded again.

The ideal situation for everyone, it seems, would be for Walker to strike a deal that keeps him with the Bills, and Buffalo general manager Marv Levy said this week that is the aim.

"We are obviously hoping it doesn't come to the [nullification] part of the deal," Levy told the Buffalo News. But there is still considerable work to do done to avoid sending Walker back to Philadelphia.

"He's millions of dollars below any other five-year starter [at tackle] in terms of his average [compensation] per year," Irby said. "All we want to do is make a fair adjustment."

The Buffalo tackle depth chart, while not as good as the one in Philadelphia, isn't exactly a bare cupboard. The Bills have a group that includes Larry Tripplett, Tim Anderson, John McCargo and Kyle Williams. There is some concern over McCargo, a first-round pick in 2006 who is battling back from foot surgery, but hopes to be fully recovered by the start of camp. But what the Bills are missing is an interior player who can collapse the pocket, a guy like Walker, who has just one fewer sack over the past five seasons than the entire Buffalo tackle corps has produced in that period.

Without a player like Walker in the lineup, one has to wonder where the Bills will be able to get an inside pass rush. And if he's not playing for the Bills, a distinct possibility unless the two sides agree to a contract in the next two months, Walker has to wonder exactly where he will be in 2007.

Len Pasquarelli is a senior writer with ESPN.com.