During a late May practice session, Kevin Kolb was starting to feel as if he was gaining traction on the daunting learning curve every rookie quarterback faces when he enters the NFL.

Marty Mornhinweg, Philadelphia Eagles assistant head coach, then increased the challenge by calling a play with an advanced degree of difficulty.

But Kolb, the Eagles' surprising pick in the second round of the 2007 draft and the sudden heir apparent to Donovan McNabb, suffered a brain cramp.

"I froze a little bit," recalled Kolb, the player chosen 36th overall in this year' draft. "You feel a little [sheepish], you know, like, 'What the heck?' But it was like a foreign language to me. I didn't have a clue as to what [the call] meant."

What it meant is that Kolb isn't much different than any other rookie quarterback. He will, though, be viewed differently than many of them, and not just because of the controversy his selection provoked when a chafed McNabb publicly acknowledged being caught off guard by the decision to draft a young quarterback, despite already having two veteran backups, A.J. Feeley and Kelly Holcomb.

Kolb, 22, has been pegged with the dread tag of "systems quarterback," an often-unflattering handle that suggests his gaudy passing statistics at the University of Houston were more a product of gimmickry than ability. Given the history of the term, and the dismal track record of some of the other NFL quarterbacks who have been saddled with it, it is a marker that can be a curse. But that didn't stymie Philadelphia scouts in evaluating Kolb and it didn't give the Eagles' brass any pause when they selected him.

Why not? Because coach Andy Reid and Mornhinweg, along with general manager Tom Heckert, are convinced that Kolb can make the successful transition from the intricate paradigm in which he operated in college to the West Coast design the Eagles employ.

"I don't care as much about the offensive scheme he was running, other than the fact that he did it very well," said Reid, never one to fret much over labels. "I like the way he's wired."

That solid endorsement aside, Kolb, like every other "systems quarterback" who preceded him into the NFL, will have to overcome the healthy degree of skepticism that accompanies any passer who has played in a nonconformist, offbeat offense, and then is asked to assimilate a more conventional one as a professional.

The history of the quarterback position just in the past 25 years or so is littered with the names of players -- many of them, like 1989 Heisman trophy winner Andre Ware and David Klingler (each of whom, like Kolb, starred at Houston) and Cade McNown, onetime first-rounders -- who failed to make that transition. Whether their shortcomings were a function of the designs in which they played in college, or just an absence of an NFL-caliber skills-set can be debated, but the perception clearly is that "systems quarterbacks" represent a big gamble. 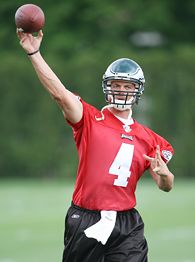 It is a perception, noted Klingler, who was chosen by the Cincinnati Bengals in the first round of the 1992 draft, and who started only 24 games in four seasons with the team, that simply adds more pressure to what is already a difficult task.

"There's like a stigma attached to it," said Klingler, who once threw 11 touchdown passes in a single game, running Houston's earlier version of the run-and-shoot, and then posted only 16 touchdown passes in his 33 NFL appearances. "You're like a walking question mark. 'Can he do this? Can he handle that? Is he going to be able to successfully transfer the stuff from his [college] offense and do the same things [in the NFL]?' The pressure of playing the quarterback position in the NFL is hard enough without all that."

Several veteran scouts interviewed over the past two weeks acknowledged that evaluating a "systems" quarterback is a tricky business. The toughest component of the scouting business for any position is projecting what a prospect will become in the league, and trying to grade a passer who works in an unconventional offense exacerbates an already dicey process.

And it isn't only run-and-shoot quarterbacks who are difficult to project.

Passers who have played for current University of California coach Jeff Tedford, even back when he was a highly celebrated coordinator, have struggled so mightily in the NFL that his offense is now viewed by some as one that inflates numbers and makes passers seem better than they really are. A partial list of Tedford-tutored flops includes first-round failures such as Akili Smith, Joey Harrington and Kyle Boller.

Quarterbacks who have come up under the Steve Spurrier offense, one in which the Ol' Ball Coach is almost like a puppeteer pulling the strings, also have spotty NFL records. It's also hard to grade passers who have played in coach Mike Leach's spread offense at Texas Tech.

To understand a player, to rate him on tape, scouts have to understand precisely what he was asked to do in the particular offense in which he worked. And there is sometimes a lack of comprehension in that regard when it comes to quarterbacks in unusual systems.

Yet the most critical factor remains pure talent. Current University of Hawaii quarterback Colt Brennan, who has put up huge numbers working in coach June Jones' run-and-shoot system, is still likely to be a top-10 pick in the 2008 draft.

"It's still about throwing the ball, arm strength, mental toughness, work ethic, command of the game and of the huddle  those are still imperatives," said one AFC personnel director.

And those are things the Eagles clearly saw, in a very positive light, in Kolb, who recently signed a four-year, $4.285 million contract.

Said Heckert: "He is super talented."

And so it mattered little to the Eagles that Kolb, one of the fastest risers on boards across the league in the last few weeks leading up to the draft, worked almost exclusively from a shotgun formation in college, and rarely was under center. There wasn't a lot of hand-wringing over the fact that the Houston offense didn't use a tight end very much. Or that, at times early in his career, Kolb seemed a little too careless with the ball. 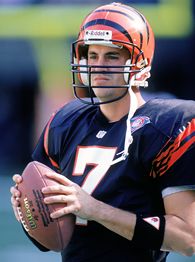 What the Eagles saw when they evaluated Kolb was a quarterback with plenty of college experience, having started 50 games, with a strong enough arm, nimble-enough feet, a feel for the game and loads of confidence.

During his college career, he completed 964 of 1,565 passes for 12,964 yards, with 85 touchdown passes and only 31 interceptions. He threw for 3,000-plus yards in three of his four seasons and, in 2006, had 30 touchdown passes and just four pickoffs. His career passing yards are the fourth most in Division I history, behind only Timmy Chang, Ty Detmer and Philip Rivers. And never mind that Chang and Detmer never became big-time NFL quarterbacks.

Those 1,565 passes Kolb threw represent a lot of "dropbacks," a ton of opportunities for reading defenses, and understanding a complex passing design.

"We never questioned the 'systems' stuff," Mornhinweg said. "When you saw him throw the ball, and talked to him and gauged his football intellect, or put him up at a [dry erase] board and walked him through an offense, you knew he was a football player. You take all of the perceptions about a 'systems guy' out of the equation, and just evaluate him as a passer, and the decision wasn't all that hard."

The decision was made easier considering McNabb finished three of the past five season on injured reserve, and the Eagles need to begin grooming his potential successor.

Time will tell whether the Eagles were as on-target with their assessment of Kolb as he has been in the team's minicamps and the early days of training camp. Kolb has thrown the ball well and has demonstrated a keen and quick grasp of the West Coast offense. And the instances like the one in May, when he was paralyzed by lack of familiarity, have been reduced. Known as a quick study and a hard worker, Kolb has pored over the playbook.

"The hardest part," he said, "is taking it off the paper and translating it to the field. It's the mental part that's the hardest. I mean, I think I can throw the ball at this level. But there have been a lot of guys with better arms than mine who didn't make it for other reasons. So I'm looking at it like I've got to work at everything, then go back and work on it again."

For his part, Reid isn't looking back on the decision to take Kolb and second-guessing any element of it.

"With quarterbacks, if you have a good one that you feel good about, you don't really care what anybody else thinks," Reid told the Philadelphia Inquirer after the draft. "If he comes across your [draft] board, and you feel he's the best, then you take him. And then you just let things happen."

Len Pasquarelli is a senior writer with ESPN.com.