INDIANAPOLIS -- Down by a field goal halfway through the second quarter Thursday night, and with the offense noticeably struggling and out of sync, the Indianapolis Colts defense took the field, knowing it desperately needed a stop against a New Orleans Saints attack that statistically ranked No. 1 in the NFL in 2006.

And earning a stop was just what the once-maligned Colts defense did, forcing a three-and-out and a punt.

End of series and, essentially, the end of the game.

The Colts offense caught fire and scored on its ensuing five possessions, and suddenly a 10-7 deficit was a 34-10 runaway.

In a blowout in which the final score was 41-10, it's hard to identify a turning point, a precise snapshot when momentum inexorably charged in one franchise's direction. But for Colts coach Tony Dungy, there was no mystery about when Big Mo' moved to his sideline and established squatter's rights there.

"That was big," Dungy said of the second-quarter series in which his defense stoned the Saints. "If they take it down and score and go up 17-7, it's a completely different game. But the defense went out and made a stop and gave our offense a chance to get going."

That series certainly set the tone for an Indianapolis defense that featured four new starters and a rookie nickel cornerback. During the stretch in which the Colts offense scored on five straight series, with Peyton Manning torching New Orleans cornerback and onetime Indianapolis teammate Jason David time and again, the defense held the explosive Saints to 24 snaps, 58 net yards and four first downs.

I thought we played at warp speed. It was like a race to see who could get to the football first.

On four of its offensive series in the stretch, New Orleans got no first downs. On another possession, the Saints had just one first down.

In a game that was supposed to be an old-fashioned offensive shootout, it was the Colts defense that played with the speed of a bullet. Last year, during the dismal period when Indianapolis could not stop the run, Dungy and defensive coordinator Ron Meeks kept emphasizing that the unit needed to play fast.

On Thursday, with an infusion of youth, the Colts could not have played much faster.

"I thought we played at warp speed," said third-year defensive back Marlin Jackson, who made his 10th career start but just his second at cornerback. "It was like a race to see who could get to the football first."

There was considerable offseason consternation among the fans here about the defections the defense suffered in free agency and the loss of tackle Anthony McFarland to a training camp knee injury. In truth, though, Colts personnel officials and coaches privately felt the defense was much faster with its younger players than it was in 2006. 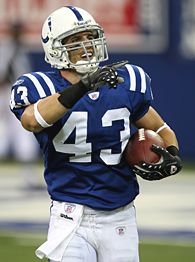 Jackson and Kelvin Hayden, the other new starting cornerback, are bigger than the veterans they replaced, more physical and quicker to stop the run. Weakside linebacker Freddie Keiaho, who had six tackles, an interception and a pass deflected in his first career start, is a better athlete than the departed Cato June. Rookie free-agent tackle Ed Johnson isn't as strong an interior anchor as McFarland, but he held up well Thursday night, and one has to wonder how he went undrafted.

And perhaps most importantly, free safety Bob Sanders -- arguably the NFL's best pound-for-pound defender, but a guy who has as many missed games as appearances (24) during his first three seasons -- is healthy again. And the Colts are a much different defense when the hard-hitting Sanders is on the field, as he was during the team's playoff run to the Super Bowl XLI title in 2006.

"He makes us better, no doubt about it, but I just think getting off to a fast start is always a key for us," Meeks said. "And we got off fast tonight. We had guys flying to the ball. We just didn't give up many big plays."

In fact, the Colts held the New Orleans offense to just a field goal. The Saints' lone touchdown came, ironically enough, on a 55-yard fumble return by David, who then went from hero to goat thanks to the exploits of Manning and wide receivers Marvin Harrison and Reggie Wayne. In his defense, David didn't get much help from his safeties on two of the three scores he surrendered. Still, he had as long and disappointing a night as the New Orleans offense.

The Saints managed only 293 yards, their second-lowest output under coach Sean Payton, and 18 first downs. But 134 of those yards and half the first downs came in garbage time, when the outcome already was decided and the Indianapolis defense fell back into a soft zone.

Saints quarterback Drew Brees, the NFL's leader in passing yards in 2006, threw for just 192 yards, with his longest completion at 23 yards. How significant is that second number? Last season, Brees led the league in completions of 20 yards or more, with 41, and he had at least one completion of 40-plus yards in 12 different games. Brees' anemic average of 6.9 yards per completion against the Colts is believed to be one of the lowest in NFL history.

Sure, it was only one game, but the young Colts might have served notice Thursday night that, in attempting to defend their Super Bowl title, they will be more than just a one-dimensional team known primarily for its offense.

"It was," Dungy concluded, "kind of exciting to watch."