PHILADELPHIA -- In the natural maturation process of almost every successful NFL quarterback, there comes a galvanizing Kodak moment, one that carries him around the learning curve and puts him on the fast track to greater things.

It remains to be seen whether that moment arrived here on Monday night for Washington Redskins third-year quarterback Jason Campbell, whose late second-quarter touchdown pass to tight end Chris Cooley represented the signature play of a hard-fought, 20-12 victory over the Philadelphia Eagles.

But years from now, when Campbell's career is being reviewed, the pass to Cooley might well be recalled as the quintessential point when the quarterback became a top-shelf performer. 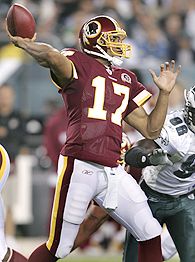 "I definitely think plays like that [accelerate] the process a lot," allowed Cooley, who has become Campbell's clutch, go-to receiver. "It's a boost to the confidence of all of us, but probably to Jason more than anyone else. I mean, you can see his confidence increasing anyway from game to game. And the confidence guys have in him, well, that's growing, too. I just think you're going to continue to see him make more and more big plays like that. The more he plays, the better he'll keep getting."

With only eight regular-season starts on his résumé entering Monday night's divisional matchup, Campbell can be forgiven some of the inconsistent moments that still mark his game. Prime example: Leading 20-12 with an opportunity to secure the victory, Campbell badly overthrew wide receiver Santana Moss streaking behind the Philadelphia secondary on what could have been a 64-yard touchdown.

Asked if he was kicking himself as he returned to the sideline following the errant long ball, Campbell laughed.

"Kicking myself?" he said. "I wanted to put on boxing gloves and knock myself out."

As it was, he delivered a stiff uppercut to the Eagles -- who fell to 0-2 for the first time since 2003 -- with his deftly lobbed touchdown pass to Cooley just nine seconds shy of halftime.

The 16-yard touchdown culminated an efficiently orchestrated hurry-up drive, one on which Campbell either threw or ran for all but four of Washington's 73 yards. It also came amid considerable confusion on the Redskins' sideline.

After moving to the Philadelphia 1-yard line, the Redskins were flagged for consecutive 5-yard presnap penalties, making it second-and goal at the 11. Trailing 6-3, coach Joe Gibbs decided to send in kicker Shaun Suisham for a chip-shot, game-tying field goal before the half. But when the Eagles called a timeout to "ice" Suisham, the Washington offensive staff revisited the situation, and with 14 seconds remaining, called a play.

"I was a little nervous at that point," Gibbs conceded. "I thought we had to take a shot at the end zone. But a lot can go wrong in that situation."

And something did go wrong at first, when the Skins were called for a third 5-yard presnap penalty, moving them back to the 16. No problem, though, because Campbell did everything right.

Cooley aligned in the left slot, inside of wide receiver James Thrash, who drew Eagles nickel cornerback Joselio Hanson inside, leaving the tight end singled up on an overmatched safety. Cooley ran a sharp route to the back-left corner of the end zone and Campbell put the ball on the money for a 10-6 lead at intermission.

"The momentum you get on a play like that, it's tremendous," said Moss, who registered six catches for 69 yards. "I mean, the field goal team's out there and you're thinking like, 'OK, we just played 30 minutes and proved nothing. We're going to have to win in the second half.' But going in with a lead, yeah, it's a rush. We were feeling pretty good."

In large part, because the Washington defense under coordinator Gregg Williams is back to being more than just pretty good. Although Donovan McNabb and the Philadelphia offense showed signs of life in the fourth quarter, the Redskins were able to hold off a frantic Philadelphia drive in the closing minutes to seal the victory.

The Redskins have permitted just 25 points in two games, and have surrendered only one touchdown. All the Eagles could muster on Monday night were four David Akers field goals.

The Eagles have scored just one touchdown on 22 possessions in two games. And on its last 17 possessions (not counting a Monday night series that began with only nine seconds left in the first half), the Philadelphia offense has managed just five field goals. McNabb, who was jeered on several occasions Monday, clearly is out of sync.

McNabb completed 28 of 46 passes for 240 yards, but consistently settled for checkdowns to tailback Brian Westbrook in third-and-long situations. Fourteen of his completions went to wide receivers, but for only 126 yards, and he did not have a completion longer than 19 yards.

"We're just off by a hair," Eagles coach Andy Reid said of his sporadic offense. But that was hardly a sentiment shared in his own locker room, where the Eagles find themselves two games behind division
co-leaders Dallas and Washington halfway through September.

That the Redskins have fashioned a 2-0 mark despite scoring only 36 points is a testimony to the grit Washington has demonstrated so far. There is a feeling in the Washington locker room, though, that the best is yet to come for both the Redskins and their young leader.

"I think for him to make that [touchdown] throw," Gibbs said of Campbell, "it definitely helped him. That was a big moment."

Maybe, in the big picture for Campbell, even bigger than anyone realized at the time.