I first saw Dan Marino throw a football in 1973.

He was tall and gangly, literally so head-and-shoulders above his teammates that he took a knee in the huddle to make sure his teammates heard the play call. He was mop-headed in the style of one of his heroes, Joe Namath, and laser-armed, every throw coming off his hand a tight, unwavering spiral. And Marino operated out of a sophisticated passing offense that highlighted all of his burgeoning skills. 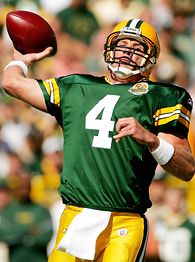 Oh, did I mention that Marino was 12 years old at the time, playing quarterback at St. Regis, the archrival of St. Joseph, the rag-tag junior high team that I helped coach in the Pittsburgh Catholic League?

Later that season, I was among those coaching the annual all-star game, and despite having that future Hall of Famer on our roster, we suffered the ignominy of losing -- thanks to our insistence on installing a remedial offensive blueprint.

That experience, though, taught me a few things about football: Play to the strengths of your personnel. Be smart enough to get out of the way. And great passers -- or, more accurately, great quarterbacks -- are as much born as they are made.

Not until 18 years later, while covering the Falcons for the Atlanta Journal-Constitution, did I meet Brett Favre, the team's second-round draft pick in 1991. From a personality standpoint, he couldn't have been any more disparate from Marino. Where Marino was the consummate city kid, with a hint of hardscrabble honed on the streets of the South Oakland section of Pittsburgh, the laugh-a-minute Favre was Li'l Abner, exported to Atlanta straight from some real-life Dogpatch. 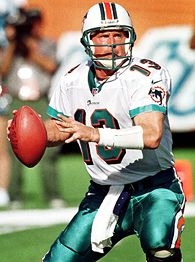 Yet in Favre, there was the same self-assuredness I had witnessed in Marino from his days at St. Regis to Pittsburgh's Central Catholic High School (my beloved prep alma mater) to the University of Pittsburgh, then to the Dolphins. Favre and Marino shared the kind of inherent moxie that, combined with their talent, eventually allowed them to assault the NFL record book.

Both were, obviously, leaders. And on the football field, they were risk-takers, throwbacks to a time before dink-and-dunk passing paradigms. They were strong-armed quarterbacks for whom the term "West Coast offense" meant that, well, you could just about heave the ball from one coast to the other.

On Sunday afternoon at the Metrodome in Minneapolis, barring a staunch effort from the Vikings' secondary, Favre will break Marino's career record for touchdown passes. And I'll be there to see it, thankful for the opportunity to have witnessed the entire pro careers of two guys who did it right. And did it their own ways.

In a game that, save for a few practitioners of the forward pass such as Peyton Manning, has become paint-by-numbers, Marino and Favre were Jackson Pollock-type passers. Chuck it up, take some chances, throw it into coverage once in a while, play aggressively and with passion. There was little rehearsal for the way they did things, nothing antiseptic about how they played sport's most challenging position.

Make no mistake: There are some tremendous passers in the league now. But many of the 65-percent completion-rate quarterbacks still play the game by rote. Marino and Favre played it with instinct and daring.

Because they were gunslingers.

Admittedly, part of the Green Bay Packers' 3-0 success this season has been a product of Favre's managing the game better than in recent years. He has reduced the number of maddening moments when he injudiciously challenged coverage packages; thus, he has reduced his interceptions. The resuscitation of Favre at a time when most pundits were ready to bury his career, and the revival of the Packers, has been fun to watch.

But for most of his career, Favre was fun to watch because, well, he was Favre.

Despite their great touch and superb decision-making, Peyton Manning and Tom Brady have a gunslinger's mentality, a fearlessness when throwing the football. Here are three other NFL quarterbacks who qualify for gunslinger status:

• Tony Romo, Dallas: The emerging Cowboys star reiterated this week he is not as concerned with completion percentage as he is with making plays. Romo (photo above) has terrific downfield vision and puts it to good use in those instances when he is forced to buy time in the pocket. His career averages of 8.85 yards per attempt (the barometer at which many coaches look first) and 13.9 yards per completion attest to his ability to challenge secondaries vertically.

• Carson Palmer, Cincinnati: With apologies to Manning and Brady, the Bengals' star might be the best pure thrower in the league. Certainly, he throws the prettiest deep ball of any QB playing right now, displaying a rare combination of arm strength and touch. When Palmer is in rhythm and gets on a roll, especially when the Bengals operate from a three-wide receiver set and no-huddle mode, there are few better.

• Jake Delhomme, Carolina: Yeah, there have been stretches of his career when he was careless with the ball and turnovers came in bunches. But Delhomme takes a lot of risks and gets a lot of reward in return. He has a solid ratio of TD passes to interceptions (100-69) and has eight TD passes and just one interception this season.

And, like Marino, that meant believing, sometimes way too audaciously, in your own arm strength and the ability to power the ball into the smallest openings. Throw first and worry about the consequences later. As much as that kind of approach rattled coaches, it was part of what made both players great quarterbacks.

Hey, I was present for the first touchdown pass of Favre's professional career. Unfortunately, it was to the other team -- an interception by Washington Redskins linebacker Andre Collins that was returned 15 yards for a score on Nov. 10, 1991. Not surprisingly, the pickoff came on a play when Favre was under pressure, spun around, and just trying to make something happen. He has spent the ensuing 16 seasons trying to make something happen, too, performing with great fortitude. Ironic, isn't it, that a guy who had a couple of feet of his intestine removed during emergency surgery prior to his senior season at Southern Mississippi could play with such guts?

But that's the way Marino played as well, and on Sunday the careers of the two men will come together, even as Favre lays claim to a record that he'll hold only until Manning breaks it in the twilight of his remarkable career (click here for TD list). That Marino and Favre have combined for 527 interceptions is almost as notable as the 840 touchdown passes they've thrown, because it's indicative of their reluctance to simply play the game in the cautionary mode we see so often now around the league.

It's notable, too, that the players have great passion, both for the game and for their families. They're good men who haven't forgotten their roots.

It was with no small degree of pride that I was able to cast a vote that helped put Marino into the Hall of Fame in 2005. As he walked to the podium that day in Canton, he stopped to thank me and to whisper, "Hey, man, Central Catholic, huh?" I hope I remain a Hall selector long enough to cast a similar vote when Favre is nominated.

One of my prized possessions is a handwritten note from Marino, which my wife had matted and framed, thanking me for a story in which I reminisced about the honor of having watched him flourish from teen to adult. And one of the best times I ever had in 30 years of covering the NFL was the two days I spent in Kiln, Miss., Favre's hometown, in the spring of 1991.

The Favre family welcomed me into their home, mother Bonita and father Irvin (who died in 2003) and their kids and close friends. Around the dining room table, they regaled me and a Journal-Constitution photographer with stories about Brett's legendary moments. There was the tall tale of the "Whistlin' Pass," a ball thrown so hard by Favre that it whistled through the air, allowing a receiver who heard it to turn around and make the game-winning touchdown grab. And the story of the touchdown pass Favre threw that knocked the receiver a foot into the air. Great stuff.

But mostly there were stories about Favre's willingness to throw the ball into any kind of coverage, in any situation, basically just firing it and trusting that the results would be positive.

It would be fitting if the record-breaking TD pass by Favre comes after he scrambles around a little, spots the smallest window possible into which to squeeze the ball, and absolutely rifles it into his receiver.

It would be a moment to remember for this aging sportswriter and for all NFL fans.

It would be a moment befitting a gunslinger.