MINNEAPOLIS -- As he hiked up his pants on Sunday evening -- one leg at a time, it should be noted, for those Green Bay fans who believe their future Hall of Fame quarterback is a Superman in shoulder pads -- Brett Favre tore off the button on the waistband, and the pair of khakis slid all the way down to his knees.

It was the only time all day Favre flirted with coming undone.

"Is he cool or what?" rookie wide receiver James Jones asked rhetorically following an emotional 23-16 victory over the Minnesota Vikings that pushed the Packers to 4-0 for the first time since 1998. "It's like he's got an answer for every situation, you know?" 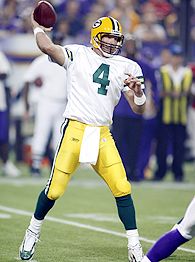 In reaction to his comical wardrobe malfunction, Favre simply tossed the button-less pants to a nearby trainer and pulled on a pair of baggy cargo shorts. Never overly concerned with sartorial correctness, Favre appeared at his postgame media session in a black, short-sleeved T-shirt, the aforementioned shorts, a pair of white anklets and some hiking shoes.

His audibles were far better -- and more attractive -- during the game, with both of his touchdown passes occurring on situations in which Favre changed the call at the line of scrimmage. That includes the 16-yard laser to wide receiver Greg Jennings that opened the scoring 10 minutes into the first quarter, and broke the all-time touchdown pass record Favre had shared with Dan Marino.

It was a day, certainly, that was consummate Favre, with the Packers' star completing 32 of 45 passes for 344 yards, two scores, no interceptions, and an impressive passer efficiency rating of 108.0. The game marked the 50th time Favre has thrown for 300 yards, lengthened his NFL record for most victories by a starting quarterback (151), and, dating back to the final month of the 2006 campaign, extended the Packers' win streak to eight games.

Green Bay is now 76-7 in games in which Favre has a passer rating of 100.0 or better. And it was Favre's fifth straight performance with a 100.0 passer rating at the Metrodome, a venue he once considered his personal House of Horrors. Not surprisingly, the Packers have won four of those five games.

With the league's most anemic running game -- one that Favre appropriately termed "non-existent" after it generated a paltry 46 yards on 20 carries against a tough Minnesota defense -- the resurgent Packers certainly need every ounce of their quarterback's physical heroics. And with a roster that's the league's youngest, they need his football savvy and leadership even more.

Take the record-breaking TD toss, the 421st of his career. Favre checked to a "Dragon" pass route, which essentially signaled tight end Donald Lee to run an inside "drag" designed to pull the safety away from Jennings, who was running a quick slant up the right seam. What made the call more remarkable was that with the play-clock running down, Favre had to signal to the two receivers to the left of the three-wideout formation and still calmly execute the play.

In fact, that the play worked so well and under such duress was the first thought that struck Favre as he picked himself up after being dumped while unloading the scoring pass. Then, after about 20 seconds, it finally occurred to him that it was the record-breaking pass.

"The incredible thing wasn't so much that we scored," said Favre, who celebrated by lifting Jennings on his shoulders before putting him down and running to the stands to enjoy the moment with wife Deanna and family members. "It was that we even got the play off. I had to move Donald, or his route would have been in the way of Greg's route. And, really, the first thing I thought was, 'This is how an efficient offense is supposed to work.' And then, after that it was like, 'Oh, yeah, that was the touchdown pass, wasn't it?' "

On his second TD pass, a 33-yarder to Jones in the fourth quarter, Favre went after McCauley for a second time, and again made a timely check-off from a three-wideout formation. On the third-and-nine play, Favre moved his tailback slightly in a set from which Green Bay frequently runs a draw play, and then audibled to an "all go" pattern.

Favre's pump-fake froze McCauley, and Jones, who had lined on as the single receiver on the right side, streaked past the stymied young cornerback to make the TD catch.

It was the eighth completion of 15 or more yards for Favre, but that is hardly indicative of his approach this season. Favre also completed 20 passes of 10 yards or less, a statistic more reflective of how he's managing games in his 17th season.

While Favre remains a gunslinger, he clearly takes fewer risks now, operates more judiciously, and counts on his wide receivers and tight ends to add yards after the catch. So what if he couldn't keep his pants up Sunday evening? As the undefeated Packers headed for the airport, there was no denying why this team is soaring.