For this reason, the focus on the quarterback, and the necessity for each franchise to have a healthy and successful player at the position, is always a top priority. Generally, a franchise does not even consider replacing its quarterback unless it is convinced he has poor leadership skills, is hurt or too old or he can't consistently win football games.

You might ask yourself why the salary cap is not a reason a team will cut ties with a quarterback. In reality, if a quarterback possesses all of a team's desired attributes, it will find a way to squeeze him under the cap. A good example is the Colts and Peyton Manning.

Following the 2005 season, the Titans still had Steve McNair at the helm. He was the first quarterback I drafted as a general manager and he was highly successful for the franchise. McNair led the team to its first Super Bowl, two conference championship games and a number of division titles. He was a great team leader and he is incredibly, if not abnormally, tough.

Unfortunately, over McNair's last two seasons with the franchise, he missed at least 10 full games due to injury and, like everyone else, he was getting older. It was not in the best interest of the franchise to sign McNair to a long-term contract structured the way he wanted it.

McNair's backup at the time was Billy Volek. Volek had a very successful tenure backing up McNair. He threw for almost 3,000 yards in just nine starts with 22 touchdowns in 2004 and 2005, and he has an NFL record for yards in his first seven NFL starts. Despite these numbers, we were still not completely comfortable with putting the franchise in Volek's hands. 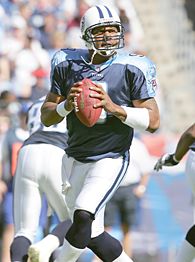 With these two options out, we only had two left. We could either sign an unrestricted free agent quarterback to lead the team into the future, or draft a young franchise quarterback. We were aware that most quarterbacks that end up on the free-agent market are generally old, injured or have personality problems or leadership issues. We didn't think we would find someone we really wanted in free agency. We knew, at that point, that we would need to draft a quarterback.

Having just completed a salary-cap purge, we were the youngest team in the NFL. Using the exact same model that made the Titans the winningest team in the league from 1999-2003, we knew we needed the team to mature as a group. The scenarios of a young quarterback with a mature team, or an aging quarterback with a young team, are both recipes for inconsistency in the NFL. The team had the No. 3 pick in the quarterback-rich 2006 draft, which was a great scenario for the Titans.

We would have been content with any of the three highly-rated prospects, but the final decision came down to Vince Young's athleticism. We felt that, despite the fact that Young was the least experienced college player in the group, in a year he would be as mature as both Jay Cutler and Matt Leinart. The difference in athleticism might allow Young to be something very special, and that is why we drafted him. As it turns out Young was everything we expected with the ball in his hands, but he is much more as a leader, competitor and as a winner.