Scene: Detroit. Date: Aug. 29, moments before the Lions were to be run over by the Rams in their final preseason game.

I met president and CEO Matt Millen on the visitors' sideline and joined him on the stroll across Ford Field, along the way asking him about the unprecedented decision to select a wide receiver in the first round of three consecutive drafts and how those well-paid talents were to go about sharing one football. Toward the end of the conversation, I asked Millen specifically about rookie Mike Williams, whom I'd understood to have missed or arrived tardy to at least 10 team meetings by that time. (I know what you're thinking, and so am I: If I had fought to enter the league early and been forced to spend a year out of football, you'd have to drag me out of the team's facility kicking and screaming.) 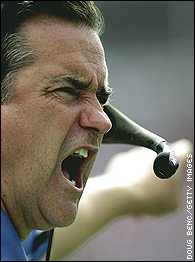 Millen reminded me that Williams is 21 years old. In other words, kids will be kids. As evidence, Millen quoted Ecclesiastes 1:9: "What has been will be again, what has been done will be done again; there is nothing new under the sun." And I thought we were talking about one player. As it turned out, Millen could just as easily have been describing the franchise he directs.

The Lions are the NFL's sorriest franchise and there is no excuse for it. Not with a state-of-the-art stadium and a first-class facility and all the money the Ford family spends on free agents every offseason and all the so-called "great drafts" they've had with Millen at the helm. Detroit is 2-3 and tied for first place in the NFC North. The way the Lions have handled prosperity, I shudder to think what the locker room would be like if they were 1-4 or winless. And you thought the Vikings had problems? Minnesota is a disgrace. Detroit is dysfunctional. At least the Vikings stick together, although it wouldn't hurt for them to find less disruptive ways of bonding.

And the disarray in Detroit starts not with the quarterback who, no matter what the coaching staff does to help, can't get it right or the receivers who just don't get it, but with the coach whose job it is to keep it together and the exec who hired him. If the Lions players seem like they're out of control it's because -- word around the campfire is -- Steve Mariucci doesn't have control. Maybe he never had it to begin with. Funny thing about control: You never realize how little of it you had until you have none at all.

Scene: Detroit, Lions postgame locker room. Date: Sunday, moments after a crushing 21-20 home loss to Carolina in which Mariucci's offense managed a net of minus-2 yards on its last 10 plays and was outscored by Detroit's defense.

Everything came to a head. Tempers flared in the locker room, with several veterans, among them cornerback Dre' Bly, linebacker Earl Holmes, tight end Marcus Pollard and guard Damien Woody, letting the offense have it, because for all the picks and money spent on that side of the ball, it hasn't done anything. The message to the underachievers was simple: You reap what you sew. It goes back to the anecdote Roy Williams recently shared with SI.com about a poor practice prior to a win over the Ravens two weeks ago. The execution was, as usual these days, poor, and players were at each other's throats. If it's true you play how you practice, then what we're seeing on Sundays from the Lions is a reflection of what they're doing, or not doing, from Monday to Saturday. That is 100 percent on the head coach.

Clearly, there is little, if any, accountability on this club. Players tend to police themselves when the sheriff and his deputies can't get the job done. That's why you have Kevin Jones confronting Roy Williams on the sideline after he doesn't go all out for a pass against Chicago, and Williams going back at Jones in the media, and everybody but the equipment guys publicly going after Harrington, the quarterback and supposed leader on offense. It never ends in Detroit, which is why the Lions will never win if they continue on this path. We can criticize Mike Tice and Brian Billick all we want for how undisciplined their teams have looked this season, but you don't hear about them coming undone as a team, at least not as often or as visibly as Detroit does. The Ravens' defense is dealing with the same set of circumstances as the Lions'. Think Ray Lewis and Ed Reed aren't frustrated with the Baltimore offense? The problem is, Mariucci, just like his quarterback, is a nice guy. Too nice, in fact. The very public finger-pointing goes on because he doesn't have a grip. That "49er Way" Mariucci brought with him just doesn't fly in the Motor City.

You would think owner William Clay Ford would be about ready to put Millen and Mariucci on a plane out of town, but that's not going to happen. Curiously (and that's being kind), Ford gave Millen a contract extension. Millen can thank the likes of Mel Kiper Jr., for that because Ford, by his own admission, rewarded Millen for high draft grades. But like a middle school GPA, those grades have meant little in the real world of wins and losses. The Lions have won 18 games since Millen arrived in 2001, or two more victories than the Texans since their inaugural season in 2002. Millen has had better offseasons than Texans GM Charley Casserly but their teams have produced the same results. Yet Millen is off the hot seat and so is the handpicked coach for whom he paid a hefty (and unfair, I might add) fine for hiring two years ago without interviewing a minority candidate. Hard to imagine Millen firing Mariucci and feeding Ford the fat contract the Lions gave him.

Mariucci is in the minority right now. He actually believes the sniping going on within his team is a good thing.

Said the coach, "It's a united locker room, and I'll tell you how."

"Because every one of them has a great passion for this organization to win. Does frustration set in? You bet. It should. I'd rather have it that way than a bunch of apathetic guys."

Ah, but in some ways he does. Give me a rewrite on my "Who's No. 1?" piece from September. The least of the Lions' concerns right now is spreading the ball among the "Big Three" -- the only thing big about them is their collective height and the bust label they'll carry if they don't get their acts together soon. The impression I get is that several veterans, apology or no, are angered to the point of not speaking to Charles Rogers for the selfishness displayed in getting himself suspended for four games for violating the league's substance abuse policy. Roy Williams has proven one thing early in his career: He is as fragile as he is talented. Mike Williams gets credit for being the only first-round wideout to play Sunday. He at least shows up for games.

At the end of preseason, Mike Williams numbered his aforementioned attendance transgressions at only two while acknowledging a struggle with the structure of professional football. One of his agents also downplayed the issue. Yet a Lions team source characterized the frequency of Williams' absence from and tardiness to meetings thusly: "He must really love football because he's playing for free right about now."

Right now Kevin Johnson has the most catches (17) among the wide receivers.

But it's Harrington who catches the most heat in Detroit. And in regard to the players, rightfully so. He's lost out there. Offensive coordinator Ted Tollner has given center Dominic Raiola more responsibility than Harrington at the line of scrimmage. Harrington doesn't have to redirect protections as many quarterbacks do. Raiola does it. I hear Raiola has been handling the "check with me" calls. There was an instance in Sunday's game in which the play clock was about to expire and a teammate had to call a timeout.

The Lions have made it so that all Harrington has to do is throw the ball. But he doesn't see the field well, just the rush (which has been steady, thanks to the collective poor play of his O-line). He is incapable of producing plays on his own. Defenses are focusing on Jones (2.7 yards per carry) and daring Harrington to do something about it. He can't.

Mariucci has to do something about it before it's too late. Fortunately Jeff Garcia is coming back a few weeks early -- and not a moment too late -- from a broken leg suffered in the preseason. He'll practice Wednesday and the other day, Garcia told someone in the Lions' building, "I'm back." You have to think he'd like to return in time to play his former team, the Browns, on Sunday. With the current state of affairs in Detroit and the division, it's going to be difficult for Mariucci to stick with Harrington any longer than absolutely necessary. Garcia, who was with Mariucci in San Francisco, clearly knows his version of the West Coast offense better than Harrington. Plugging in a veteran who has the respect of his teammates should help matters.

Still, I wonder, when are the Lions going to fix the real problem?