LAKE BUENA VISTA, Fla. -- How do I say it? There is something really right, something quite natural, something rather appropriate, fitting, just plain good about Art Shell's coaching the Raiders again, representing the franchise -- with his presence at Tuesday morning's AFC coaches/media breakfast and every day through his persona -- again. Shell's return is all those things not just for Oakland but for the league, for the game.

Some of the hires this offseason, you might call them head scratchers. Not Shell's. The Raiders' search for a head coach was prolonged and confusing, but in the end, settling on Shell made so much sense.

And so now here he is, after almost a dozen seasons, back where he belongs, again a member of the elite fraternity of NFL coaches. Blending in and yet still standing out, because if you had to do it all over again and match each coach to a club, Art Shell should always be a Raider. Tuesday he wore a white Raiders polo and black pants to breakfast. He's even got the silver hair going.

"It's good for Art and it's good for the Raiders," said Chiefs coach Herman Edwards, seated at the table next to Shell's.

Next to Edwards' table, Tony Dungy holds court. Romeo Crennel and Marvin Lewis are over on the other side of the room. On Wednesday morning, Dennis Green and Lovie Smith will meet with the media. There are an all-time high seven African-American head coaches. Shell was the first, back in 1989. He's also the latest. Yet another season why it's good to see him back. 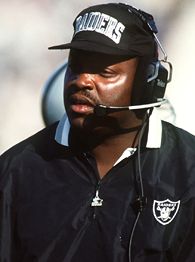 Back in black, of course.

"He's part of that Raider family," Edwards continued, "that folklore, The Nation. At the end of the day, he is a Raider."

Meanwhile, the Raiders haven't been themselves: their nasty, aggressive, confident, bad (not bad meaning bad but bad meaning good) selves the past few years. Try 13-35 over the three seasons since losing Super Bowl XXXVII. Oakland put itself back on the map in the early part of the decade under Jon Gruden, but the reality is the greatness of the Raiders has been missing since Al Davis fired Shell and his .586 winning percentage after the 1994 season. Try eight losing seasons since.

Last season, in going winless in the division, the franchise hit rock bottom. Enter Shell, the Hall of Fame and eight-time Pro Bowl left tackle and perhaps more important, a career Raider. Who better to try to revitalize the Raider mystique, to connect the past with the present, than a man who helped create it in the 1970s?

It's a shame that Shell was made to wait as long as he did for a second chance while watching as so many less-qualified coaches came, went, and, in some cases, were recycled while Shell, after stints on staffs in Kansas City and Atlanta following his exit from Oakland, drifted as far from the sideline as the league office. Shell had interviews, including a five-hour sit-down with the Dolphins last year, but no job offers.

"I wasn't sitting there looking out the window waiting for an opportunity," Shell said. "But there was always an attraction to being on the sideline, working with the players."

No, it wasn't right that Shell was denied another opportunity. But in the end, right now, everything's right. Shell is where he belongs. It's hard to imagine his having been another team's head coach.

"The Raiders, that's home to me," he said. "That's where I grew up, spent 27 years in that organization. To come home and try to bring the team back to its winning ways, it's exciting to me.

"It's like when your father calls you and tells you it's time to come home."

Shell's greatest challenge might not be getting the most out of newly acquired quarterback Aaron Brooks or maximizing the talents of Randy Moss or getting a young defense to play well but rather getting the team to understand what it means to be a Raider. One of Oakland's problems last year is that the players didn't comprehend that games at Denver, at Kansas City, weren't regular road trips. Those are rivalries, and those teams' fans hate anyone in a Raiders uniform. If you're a Raider you have to love that, being hated.

Shell has to teach guys who were babies the last time the Raiders ran things how to go about winning  baby. It's a simple formula. The Raider mystique returns when Oakland starts winning again. How much they win depends on how hard they work. Accountability is a big theme in Alameda, Calif., these days. The Raiders had collectively forgotten that ideal the past few years. Progressively the professionalism left the building.

"People talk about mystique," Shell said. "Mystique in my mind, like I told the players the other day, [is] about toughness. What is toughness? Everybody has a different idea about what toughness is. Toughness to me is execution. I can line up and run a route on you and I'm successful, and we've got to have it again, I'm going to run that route and I'm going to beat you. If I'm an offensive line, we're going to block you, get 5 yards, when we come back, we'll get 5 more yards. That's toughness. That's execution.

"That's where I've got to get them to, to where when we come into a game, we will have to conduct ourselves to win. There's a certain attitude we have to have.

"I really believe I can get the players to understand when they hear statements like, 'Commitment to Excellence,' that they understand what those statements mean. They are phrases to some, but they mean something to me."

Michael Smith is a senior writer for ESPN.com. Contact him here.