FOXBOROUGH, Mass. -- No, they don't award championship trophies for 8-0 starts.

They should, however, think about giving the Indianapolis Colts some kind of medal for getting through the first half unbeaten, beaten up as they are.

When it comes to the Colts, it's easy to miss the trees for the forest, and this has to do mostly with their playoff failures the past four years. It's easy to take for granted what they've done and what they're doing during the regular season and focus instead on whether they'll actually be able to get it done in the postseason this time. 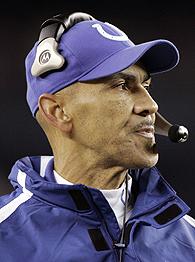 It's the teams that claim the Vince Lombardi Trophy at the end of the season that get the glory, but let's not overlook the history the Colts have made. Not since Curly Lambeau's Green Bay Packers did it three straight times (1929-31) has a team started back-to-back seasons 8-0.

And crazy as this might sound, the Colts being perfect at this point might be, all things considered, among the biggest surprises of 2006. Yes, we've seen this movie before in Indianapolis, but this is a different script with a different cast of characters.

The Colts must fight and claw for wins this season. That kind of toughness tells us the Colts have what it takes to survive and not shrink in tough playoff contests.

Just look at the guys they have, or rather, the guys they don't have: In the offseason, the Colts lost linebacker David Thornton and defensive tackle Larry Tripplett to free agency. Defensive tackle Corey Simon is out for the season with a mysterious arthritic condition in his knee. Safety Mike Doss also is done for the season. Safety Bob Sanders, around whom the Colts' defense is built, played in just his second game Sunday night against New England.

Those are just the problems on defense. On offense, the team's all-time leading rusher, Edgerrin James, went to Arizona via free agency. How the Colts would replace Edge was one of the league's bigger preseason questions. Indianapolis' offense likes to employ three wide receivers, but the third guy, Brandon Stokley, has played only 15 plays this season. So the Colts have had to evolve into more of a two-tight end offense.