Though it was unclear at press time how the fallout from the news might affect the New England Patriots' chances of competing for another Super Bowl, I nevertheless feel compelled to report the following: 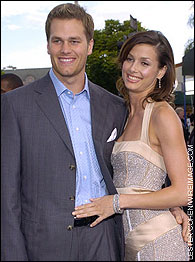 Sara Evans has decided to rejoin "Dancing With the Stars" for a night, participating in a thrilling one-off performance with the national touring company in Nashville on Jan. 21, mere days before the Big Game.

Whoops! Wrong People.com item. What I meant to say was that Tom Brady and his girlfriend broke up. But you know how it goes: You head for a site strictly to get the really important news, and before long you've gone several mouse clicks too far and you're reading about how Hilary Swank survived divorce and that Jillian Barberie is preggers (she used to do NFL pregame, sort of, for those keeping book at home).

Anyway, it turns out Brady had an actress for a girlfriend, Bridget Moynahan, and she gets extra style points for being Mr. Big's wife on "Sex and the City," and she and Brady broke up "several weeks ago," according to her publicist, who felt obliged to release a statement confirming the breakup, perhaps in response to some good investigative journalism.

And although I have to confess that I don't give the slightest damn who Tom Brady is dating, you have to respect the machine. The machine will not be denied.

If they can somehow get Brady and Sara Evans together on stage in Nashville the week before the Super Bowl, this will all make perfect sense in the end.

Good grief! Did Brady's hero Joe Montana have to deal with this stuff?