Indianapolis is hosting the scouting combine that could top all scouting combines. This year's combine, which officially opened Wednesday, combines all things NFL, and could end up being the most important in years.

Each February, the NFL converges on downtown Indianapolis to prepare for April's college draft. The simple mission is to give detailed medical checkups, conduct extensive player interviews and beg as many potential draft choices to work out as possible.

This year, thanks in part to the Super Bowl's being a week later, the gathering is a combination of everything imaginable, in some ways making the draft component almost secondary. At the conclusion of the combine Tuesday, free agency starts. Also, teams can start trading players after the close of the combine. And if that wasn't enough, collective bargaining extension talks between the NFL and the NFLPA are heating up.

General managers have to do their best multi-tasking just to get through this week. It's almost as if the stars have aligned and this combine has become an all-stop shopping service for players. From now until Tuesday, teams will be working in close proximity to each other on their personnel plans for the entire season.

The pace should be fast and furious. And if a new collective bargaining agreement is reached, the NFL will have labor stability through 2011 or 2012. That's big.

So it should be a wild stretch, and here are 10 things to watch from Indianapolis, not all of them draft-related:

1. Fight for the top: This is a strange draft, in the sense there is no consensus No. 1 pick. The receivers aren't as good as last year. The quarterbacks aren't getting the buzz of an Eli Manning or Philip Rivers. For the second consecutive draft, the offensive linemen are considered more as long-term prospects than immediate stars. The 49ers, Browns and Dolphins would love to shop their high first-round picks to move down lower, but no one can figure out who is at the top to move up for. The combine is the first step in the long process of figuring out what will happen at the top of the draft.

2. Quarterback maneuvering: Aaron Rodgers of Cal and Alex Smith of Utah are considered the top quarterbacks, and could go in the top five. They aren't expected to work out, preferring to do their workouts at their schools and in private sessions for the 49ers, Browns, Dolphins and Cardinals. There will be good competition this week between the quarterbacks angling to get into the lower part of the first round. Charlie Frye of Akron plans to do everything at the workout, and why not? He's coming off a solid Senior Bowl performance. He has the pedigree of the MAC, which has produced Chad Pennington, Byron Leftwich and Ben Roethlisberger. That could put the pressure on Kyle Orton of Purdue and Jason Campbell of Auburn to work out. They all competed in the Senior Bowl, and the combine will be a continuation of the competition. Andrew Walter of Arizona State won't work out because he's coming off Dec. 7 shoulder surgery. But he has been throwing and is expected to put on a show during his April workout.

3. To run or not to run: Most agents who believe they have potential first-round picks advise their clients to wait for their individual workouts. Based on last year, some gave bad advice. The cornerbacks who ran at the combine last year ended up winning in the end. Those cornerbacks had confidence their speed would hold up anywhere. They didn't believe tales about the slow turf at the RCA Dome. Their times held up and enhanced their draft value, while slower corners ended up putting more pressure on themselves during their individual workouts. The people who run the combine have been making the surface faster for the past few years. If a player has a bad time, he can come back and fix it at the individual workout. The most affected positions are wide receiver, running back, cornerback and linebacker.

4. The outsiders: Last year, Maurice Clarett attended the combine after he sued the league to enter the 2004 draft. He lost the lawsuit and had to sit out the season. He hasn't played in two years. Many NFL scouts thought he came to Indy with a chip on his shoulder. He wasn't in shape. He refused to run. He didn't do well in his interviews. Can he mend some fences and improve his draft position after missing almost two seasons of football? USC wide receiver Mike Williams was trying to decide last year at this time whether to turn pro because of an apparent loophole in the draft rules. Williams turned pro, the hole closed with Clarett's court loss and Williams lost the season. This will be his first combine, and he will try to sell himself as a top-five pick. 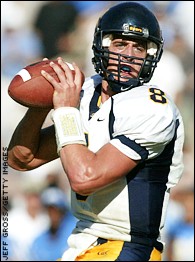 5. Running backs, running backs, running backs: Cedric Benson, Ronnie Brown and Carnell "Cadillac" Williams are considered top-10 picks in a draft rich in halfbacks. About eight draftable underclassmen turned pro in January. They come at a time in which three-quarters of the teams in the league are content at the running back position. It will be interesting to see who runs and who doesn't run. Their positions were helped when franchise tags were placed on Edgerrin James, Shaun Alexander and Rudi Johnson. But if the backs don't impress teams this week, a couple of teams might be more interested in using a first- or second-round pick in a trade with the Seahawks for Alexander, rather than drafting one of these backs.

6. Not so wide receivers: Last year, there was a feeding frenzy at wide receiver. Most scouts considered last year's class of receivers the greatest in years, and they were proven right during the season. While it will be impossible to repeat the receiver-rich draft of last year, the question being sorted out this week is where the breakoff point is for top receivers. Braylon Edwards of Michigan and Mike Williams are considered top-10 picks if not top-five. Mark Clayton of Oklahoma secured a first-round rating at the Senior Bowl. After that it's up for grabs. Roddy White of Alabama-Birmington, Reggie Brown of Georgia and others will be trying to convince teams of their value.

7. Free Agency: Teams aren't supposed to negotiate with agents for free agents until March 2, but they have no choice. Commissioner Paul Tagliabue scheduled an owners meeting to discuss negotiations for a CBA extension on the opening day of free agency. With only 85 unrestricted free agents who started eight games or more last season, this will be a fast market, and general managers better make their pitches to agents in Indianapolis or they will be left out in the cold. The recruiting of free agents actually started at the Pro Bowl. Those first visits on March 2 and 3 will be important because an elite free agent won't consent to a visit unless he knows the numbers will be right. The free-agent market is limited because teams have improved at managing the cap and don't let their best players hit the market. Because of that, the first wave of signings -- which are the most important -- are done in seven to 10 days. That means more negotiating dinners, more private meetings in suites, more "chance" meetings in lobbies. No deals will be signed at the combine, but you can be sure there will be plenty of groundwork laid.

8. Collective Bargaining Agreement: At the Super Bowl, NFL Players Association executive director Gene Upshaw didn't paint an optimistic picture of a quick deal getting done on an extension of the CBA. The current CBA runs out in 2008, but if no agreement is reached in the next year, the 2007 season would be an uncapped year. That could cause front office chaos. While Upshaw sounded cautious, Tagliabue sounded more optimistic, and he should know. The negotiation is more between the owners themselves than it is with the union. Tagliabue and a majority of the owners realize the salary cap system needs to be updated. The majority of the owners accept Upshaw's concept of using a total revenue format for the salary cap instead of the current designated gross revenue concept. The richest teams are spending 40 percent of their total revenues for player costs, while the poorest teams are forking out around 70 percent. There is enough time this week for the union and NFL Management Council to move closer to an agreement, but that March 2 meeting will be even more important. If Tagliabue can sell the owners with the highest revenues on accepting a revenue tax, an extension may get done before the owners meetings in Maui in mid-March. The new network television contracts will take the salary cap into the $100 million-plus range by 2006. More revenue sharing by the owners will create more competitive balance and a better product. This week could set the stage for the next phase of the NFL and its partnership with the players.

9. Trades: There are plenty of good players available through trades, and more will be added to the mix this week. The Broncos will trade defensive end Trevor Pryce. The Dolphins will deal cornerback Patrick Surtain. Ty Law of the Patriots is available. The Cardinals and Bills have already started working on an L.J. Shelton-for-Travis Henry deal.

10. Combine TV: That's right, the NFL Network is televising two hours of combine workouts a day starting Saturday and ending Tuesday. For years, the National Scouting Combine resisted the urge to be a television event. National, which runs the combine, prefers the secrecy of the workouts to protect its clients -- the teams. But the NFL gets more involved in the combine each year, and the league gained two hours of access starting Saturday and ending Tuesday. The hope is that the allure of television will convince more players to work out in Indianapolis instead of waiting until their individual workouts. This isn't exciting television. You'll see running, jumping and drills. But for the NFL junkie, this is great stuff because it gives everyone an early look at next season's rookies.