MOBILE, Ala. -- Charlie Frye made the most of the opportunity when he finally got a chance to play in the postseason.

The Akron quarterback was nearly flawless in the Senior Bowl on Saturday, completing 10-of-12 passes for 138 yards and a touchdown to lead the North to a 23-13 victory over the South in an audition for top senior NFL prospects. 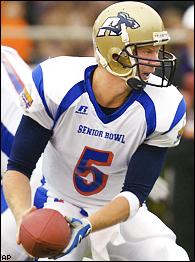 Frye seized the spotlight after his Zips were the 57th team in the NCAA's 56-team bowl sweepstakes, the only eligible team snubbed by the bowls. But he downplayed any effect Saturday's performance had on his hopes of becoming the next Mid-American Conference quarterback to make it in the NFL.

"I'm not worried about that," Frye said. "I just came in here to have fun and I just look forward to having a chance to play in that league."

The game capped a weeklong audition for top NFL prospects and wound up showcasing lesser-known players such as Akron's Frye and the game's smallest player, Kansas State's Darren Sproles, who's trying to prove he can play in the NFL.

The 5-foot-5 Sproles outplayed bigger tailbacks, darting through the middle for 24 yards and the game's first touchdown with 10:07 left in the third quarter, immediately ripping off his helmet to celebrate the score.

His goal for the week "was just to show people that I could play, that it doesn't matter what my size is," said Sproles, who had 55 yards on five carries and was selected North offensive player of the game.

Frye, selected the MVP, hit Northwestern's Noah Herron with a 22-yard touchdown pass in the final minutes to cap his performance.

Purdue's Kyle Orton was 6-of-13 for 51 yards and was intercepted on his opening series, while the other North quarterback, Connecticut's Dan Orlovsky, was taken to the hospital before the game with the flu, according to game officials.

"If you get it inside the 40, he's not going to miss," said Frye, who set up one field goal with a 40-yard pass to Stanford tight end Alex Smith.

Bill Swancutt of Oregon State was the North's defensive player of the game.

Jason Campbell of Auburn completed 9-of-13 passes for 116 yards and set up two field goals by Mississippi's Jonathan Nichols to earn top offensive honors for the South. Clemson's Leroy Hill was the team's defensive player of the game.

Georgia's David Greene hit former Arkansas star Matt Jones, a college quarterback who played receiver in the game, with a 5-yard touchdown pass with 1:05 to play. Greene, Division I's winningest quarterback, was 11-of-16 for 102 yards.

Campbell, who led the Tigers to a 13-0 record and a controversial -- at least in their eyes -- No. 2 finish after three up-and-down seasons, also had another drive going early, but West Virginia's Kay-Jay Harris fumbled away a handoff.

The game's biggest offensive star, Auburn tailback Carnell Williams, made a cameo appearance on the first series but didn't play again because of a strained muscle in his back. Williams is a potential top-five draft pick who spent the week meeting with coaches like Miami's Nick Saban (No. 2 pick) and Tampa Bay's Jon Gruden (No. 5).

Williams said his back tightened up on him before the game and doctors advised him not to play.

"I just wanted to play but things didn't happen that way," he said.

The other two top projected runners in the draft, Auburn's Ronnie Brown and Texas' Cedric Benson, skipped the game. The top-rated quarterbacks, meanwhile, are juniors Aaron Rodgers of California and Alex Smith of Utah, who weren't eligible for the game.

The defenses came up with the majority of the big plays in the first half, forcing three turnovers. Howard's Ronald Bartell stripped the ball from Georgia's Fred Gibson on a late kick return, setting up Nugent's second field goal -- a 36-yarder -- with 34 seconds for a 6-3 North lead.