So much for complaints about that "slow" Indianapolis turf.

Coaches and general managers finally had an NFL scouting combine that can last them through the spring. They left the RCA Dome late Tuesday afternoon with a book filled with times and workouts like never before. The times were lightning fast, and more than 90 percent of the players worked out.

For players and coaches alike, it takes a lot of pressure off until the draft. Normally, scouts and general managers have to traverse the country chasing down 40 times for borderline first-day draft choices who skip running at the combine. It's a logistical nightmare, and often some players lose out because top evaluators can't get to their schools because of scheduling conflicts.

Televising these workouts helped. Families could watch players run as if it were a marathon track meet. Times were fast. On Monday, for example, nine defensive backs ran 40s in the 4.3s. Three linebackers had 4.4 times. Only four wide receivers ran in the 4.3 range, but this isn't a great group of receivers, so don't blame the turf.

Years ago, the turf was slow in Indy. Scouts used to tell players they'd adjust those times, making them equivalent to what they would have run on grass. However, agents talked their clients out of running for fear of lowering their draft ratings based on slower times. Now, things are different.

The combine has turned into a competition. Spending years getting the track right has made the combine a place where players can run and not fear losing too much. They still have their individual workouts to fall back on.

Too bad the NFL could lose the draft in a couple of years if the collective bargaining agreement runs out. There might be a combine, but NFL teams will have to treat all college eligible players like free agents. That's a story for another time.

For now, here are my top 10 observations from this year's combine: 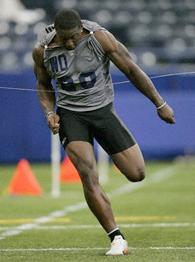 1. Florida wide receiver Chad Jackson was the biggest winner at the combine. He ran the best time, a 4.32. Jackson caught 88 passes last season for Florida, but his receiving yardage average was below 10, usually a sign of a possession receiver. That's clearly not the case with his blistering time at Indianapolis. He's fast. He's big. He's now going to challenge Santonio Holmes of Ohio State and Sinorice Moss for consideration in the later portion of the first round. Holmes didn't run and might jump well ahead of the pack at his Ohio State workout. But Jackson has the physical dimensions and the speed teams are seeking.

2. It's hard to get excited about this year's receiving class. Reggie McNeal and Marcus Vick were just as fast as the best receivers, and these guys are quarterbacks. Derek Hagan of Arizona State ran well, at 4.49, but he still struggled catching the ball. Moss is electric, but he's short, which works well in a Rams-type offense but maybe not for West Coast teams. You'd almost get more excited if quarterbacks such as Michael Robinson of Penn State or McNeal switched to receiver just to spice up this class. Years of top underclassmen turning pro early finally caught up at the receiver position. It was inevitable.

3. Jay Cutler is clearly the third-best quarterback in this draft and he won many fans by throwing at the combine. He throws stronger than Matt Leinart and purer than Vince Young. But he didn't have the wow factor to put him in the top five unless team needs dictate that jump. His mechanics weren't great on the long passes in the middle of the field. His accuracy wasn't great inside the numbers, either . All this says is that he needs work. Teams in need of a quarterback need to move into a position to take him toward the top of the first round, but his showing at the combine doesn't change that it's too early to label him a top-five pick.

4. The only thing you can say about the Vince Young Wonderlic controversy is how an underclassman can be blindsided without having experienced guidance. He's fortunate that Jeff Foster, who runs the combine, took care of him Sunday with a quick retest. Reports were inaccurate that he scored a 6, but he did score single digits or he wouldn't have needed to retest. His 16 score on the retest is good enough, and I'm sure he'll do better on a later test. Young isn't dumb. That's pretty clear. But top-three picks shouldn't be blindsided. They need to know the preparation for a combine if they are coming out as an underclassman; otherwise, they're better off staying in school for another year. Young has been busy with public appearances he earned from his fabulous season and Rose Bowl victory. But the combine is the time to start the job interview process, and he was clearly behind. That shouldn't affect his draft rating, but it might cause a team or two to think a little bit.

5. Vernon Davis is a freak. He's 254 pounds and he ran a 4.38 40 at the combine. Think about that for a second. Only three wide receivers did better than that. Davis ran as fast on the electronic time as Moss, who is 5-foot-8. The Maryland tight end is a rare physical talent who merits top-10 consideration based on his résumé in college and his athletic abilities. He blocked guys in drills 20 yards downfield. In other drills, he was a second or so faster than most participants in a great tight end class. Who wouldn't want a tight end who is faster than a wide receiver and can block?

6. Last year's running back group was great at the top. Cedric Benson, Ronnie Brown and Carnell "Cadillac" Williams went in the top five, but the drop-off after that was huge. This year's class might have only one top choice -- Reggie Bush -- but it's depth is stronger for longer. Bush, DeAngelo Williams of Memphis, LenDale White of USC and Laurence Maroney of Minnesota didn't run but seem like locks as first-round picks. The big winner at the combine was Joseph Addai of LSU. He ran a 4.4 and did well in just about everything else, too. Addai is a complete back who does all things well, along with being fast. Five potential first-round backs will impact free agency because teams will be looking for cheaper ways to fill positions if there is no CBA extension. Instead of teams paying $5 million to $7 million on an aging back, this class of five candidates will be studied closely and compared with the veterans. 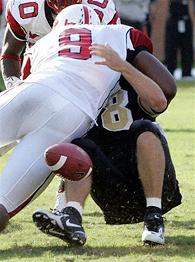 7. Defensive end Mario Williams is a little lost in the spotlight of top prospects such as Leinart, Young and Bush, but he shouldn't be. As much as teams talk about trading up for quarterbacks, what about moving up for Williams? Super Mario made that more likely with his combine workouts. Even more impressive, it wasn't necessary for him to work out. Listed at 6-7 and 295 pounds, he ran a 4.66 40. That's Julius Peppers territory. Williams has the dominating body that can fit into a 3-4 or a 4-3. He would seem to be a perfect fit for the Green Bay Packers with the fifth pick, but other teams might try to move higher than that to get him.

8. The linebacker class of 2006 is the best of this millennium. Hawk solidified a top-six selection by running a 4.6 and doing the agility drills with ease. Ernie Sims of Florida State improved his first-round stock with a 4.5 40. Thomas Howard of UTEP, listed at 6-3 and 239 pounds, moved up boards with his 4.42 40. Chad Greenway of Iowa didn't wow anyone with his workouts, but he has the tape behind him to be a middle first-round pick.

9. Cornerbacks treated the 40 like a track meet. Those who posted impressive times: Tye Hill of Clemson (4.3), Johnathan Joseph of South Carolina (4.31), Tim Jennings of Georgia (4.32), Michael Huff of Texas (4.34), Willie Andrews of Baylor (4.38), and Jason Allen of Tennessee, Antoine Bethea of Howard and Kelly Jennings of Miami (4.39). Also, safety Daniel Bullocks of Nebraska ran a time of 4.38.

10. Perfect Competition, a training group out of Davie, Fla., moved its operation to Indianapolis for seven days and had a players suite that had a chef, a 40-inch flat-screen TV, PlayStation and computers with wi-fi. Many of its clients had great combines, including Moss, Chad Jackson of Florida, Maurice Drew of UCLA and Nick Mangold of Ohio State, just to name a few. They had a massage therapist and coaches to get them ready for the workouts. It worked.