Tony Gonzalez started the tight end revolution in 1997, coming off the Cal Bear basketball court and onto the football field for the Kansas City Chiefs as a first-round choice. Since 1997, 21 teams have found tight end starters in the first three rounds of the draft; many, like Gonzalez, have basketball backgrounds.

Vernon Davis could be the first of a new, better hybrid of tight end. The guy is a freak, a 6-foot-4, 254-pound athlete with a basketball body and sprinter's speed. At the scouting combine in Indianapolis, Davis ran a 4.38 40.

"The kid out of Maryland is the next phase," Redskins offensive coach Al Saunders said. "He has wide receiver speed and wide receiver athleticism. He comes faster than Antonio Gates and faster than Tony Gonzalez." 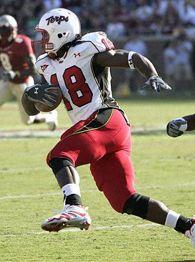 The biggest question facing Davis is whether teams in the top six are receptive to the concept of revolutionizing the position from a financial perspective. Critics screamed two years ago when Butch Davis traded up a spot to make Kellen Winslow the sixth pick. No one doubted Winslow's ability. He was considered one of the best tight ends ever to enter the NFL, a tight end projected to be better than his Pro Football Hall of Fame father.

But critics argued the wisdom of taking a tight end with the sixth pick. In doing so, the Browns ended up giving Winslow a six-year contract that could max out at $40 million, making a rookie the highest-paid tight end in football. Despite the evolution of the tight end position, teams are stingy when it comes to paying them.

Jeremy Shockey is the only tight end (discounting Winslow's deal because of the missed escalator clauses the past two seasons) with a contract that pays him an average of $5 million annually, although that may change soon. Gonzalez's seven-year, $33.3 million contract with the Chiefs could void out this year, and the Chiefs aren't about to lose him.

Pricey or not, Davis is on the Jets' radar at No. 4 and is expected to drop no lower than the sixth choice in the first round to the 49ers.

"I feel good about being labeled the new breed of tight end," Davis said. "That's what it is, when you've got a guy who can do more than catch the ball [but can also] get extra yardage after catching the ball and make guys miss. That pretty much speaks for itself."

Gonzalez opened the imagination of offensive coordinators with what he could do at tight end. He entered the league at a time when the tight end position appeared to be losing impact. Those who dabbled in the run-and-shoot offense took the tight end off their rosters, and teams with two-TE offenses in the mid-1990s used them as blockers.

The Chiefs marveled at what Gonzalez could do. Because he was so good as a basketball player, Gonzalez reveled in the physical contact of the position. Gonzalez, used to banging bodies to get to the basket or grab a rebound, intimidated smaller safeties or cornerbacks who covered him. Plus, his basketball experience of moving through zone defenses made it a breeze to catch passes in traffic.

Gates, with no football experience in college, came off the Kent State campus and took the position further. The Chargers treated him like a big wide receiver, and he became a star during his second season. In 2005, his third season, he led all tight ends with 89 catches for 1,101 yards and 12 touchdowns. Gonzalez was next with 78 catches and 905 yards.

Coaches are just dreaming about what Davis, who didn't play collegiate basketball, can do. Thanks to what Gonzalez and Gates have done before him, coaches are comfortable keeping tight ends on the field on all downs.

"When you get an athletic tight end, it becomes another dimension in your passing offense," Saunders said. "If that tight end can run and catch, it opens up the middle of the field and it makes your outside guys more effective in the vertical passing game. It forces defenses to use nickel personnel if a tight end has pass-catching ability. In Kansas City, [opposing cornerbacks like] Champ Bailey and Charles Woodson [were] covering Gonzalez."

"Well, my coach, he tried to find different ways to get me the ball, coming up with creative plays," Davis said. "But they were normally the seven route, the post corners and the digs -- and [when] you got a tight end who can make moves like a wide receiver, when there is a linebacker on you, that's kind of a mismatch."

If he goes to the 49ers at No. 6, he'll have the creativity of Norv Turner working for him. Turner has always been good working with tight ends. Of course, he's never had a tight end like this.

Thanks to Gonzalez and Gates, coordinators have been finding new ways to use tight ends. They'll come out of the backfield for plays. They will line up like receivers to draw defenses out of conventional coverage. A total of 23 tight ends caught at least 33 passes last season, including 11 who caught 60 or more.

A good group of tight ends in this draft should only help the cause. Marcedes Lewis of UCLA and Leonard Pope of Georgia have chances to go in the first round while Anthony Fasano of Notre Dame, Dominique Byrd of USC, Tony Scheffler of Western Michigan and Joe Klopfenstein of Colorado could go in the first three rounds; it's one of the richest tight end drafts in recent memory. The NFL averaged six tight ends in the first day of drafts from 2002-04.

Still, not all teams are jumping on the tight end bandwagon. Even though some mock drafts have the Panthers taking a tight end in the first round, don't expect that to happen. In the Panthers' offense under head coach John Fox and offensive coordinator Dan Henning, tight ends are asked to block more than receive. That won't change with seven potential first-day draftable tight ends.

"Different teams have different roles for tight ends," Panthers general manager Marty Hurney said. "You try to mix and match. We have two or three tight ends with different traits, and we have a rotation. Everybody would love to get a tight end who loves to block like a tackle and get down the seam like a receiver. What teams need to do is to find what strengths are most important to them."

For the Panthers, the tight end better block.

The Bengals are another team that might not totally jump aboard the tight end trend. They have one of the league's best emerging offenses, but the strength of that offense is its three- and four-receiver schemes. The Bengals have noticed how defenses are changing to minimize the impact of the tight ends.

"I don't think they are getting the same opportunities to get down the middle of the field with the Cover 2 defenses," Bengals offensive coordinator Bob Bratkowski said. "If you have a good one, it's a bonus. West Coast people have always valued them. Sure, they probably help you a little bit more in the red zone. But the Cover 2 forces a good tight end to get more of his catches underneath."

And as a result of all the contact, teams have found through studies that there were more missed games at tight end than any other position. Banging around in the zone defenses takes it toll. Of course, none of the conventional thoughts apply to Davis. He gets downfield because he's faster than most receivers.

"I think Antonio Gates is a good player, and he is someone I have watched throughout my college career, and I like the way he plays," Davis said. "But there are some things, when I look at the guy, he does a little better than myself, and things I do better than him as far as speed, things like that."

And teams are counting on Davis and guys like him being the the next phase at tight end.