There have been occasions, as Haloti Ngata blasted through the A gap in the offensive line and flushed the quarterback from the pocket, when the mammoth Oregon defensive tackle has flashed back, just for a nanosecond, to a time when he was actually the pursued and not the pursuer.

Most of those times came when Ngata, rated by many scouts as the top defensive tackle prospect in this year's draft, was playing rugby at Highland High School in Salt Lake City. And most of those times, in a sport in which the participants don't wear pads and there is considerable punishment inflicted inside tightly packed scrums, no one really wanted to mess too much with Ngata, who certainly must have ranked as one of the largest rugby players in history. 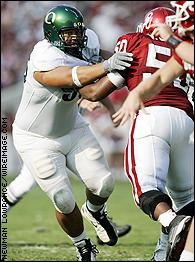 One would think that, with the gargantuan Ngata rumbling down the field with a rugby ball tucked into the crook of his elbow, opponents would be throwing themselves out of his way. As preposterous as it seems, though, a few players actually had the temerity to try to stop him.

And those injudicious opponents frequently became unwitting passengers on a runaway freight train.

"It was so much fun to run with the ball and to have people try to tackle me," recalled Ngata, who might be a top-10 selection in the NFL draft Saturday. "No one could stop me one-on-one, that's for sure, and so they just tried to, like, gang-tackle me. The closest I've come to that feeling was when I blocked a punt last year and ran 30 yards with it. Man, that was fun, you know? What I remember the most about rugby, probably what I miss the most, is charging down the field while carrying two or three people on my back."

Depending on where he is selected, Ngata, a tackle who will bring some fortunate franchise great flexibility in how it devises its front-seven schemes, might be asked to tote an entire defense on his broad back. That would be a daunting challenge for any rookie, regardless of size or skills set. But for Ngata, who has been burdened by unimaginable grief after losing both his parents in the past four years, and who essentially has had to support three siblings since they were orphaned, it's pretty much the way his life has been of late.

His father, Solomone, was killed in 2002, at age 45, when the truck he was driving hit an icy patch and careened off a freeway exit ramp and into a ditch. Olga Ngata, his mother, died on Jan. 12 after battling diabetes and kidney disease. Her death came not only as Haloti was preparing for the Holiday Bowl, but just three weeks after he announced that he would bypass his senior season to enter the draft, in large part to help defray the costs of the expensive dialysis treatments Olga Ngata had been scheduled to begin.

The big shoulders that are a conspicuous component of Ngata's 6-foot-4 1/8, 338-pound frame figure to be a boon to whatever team chooses him in the draft. For his family, though, still struggling to rebound from its losses, those broad shoulders have been a blessing.

"He's been a rock for all of us," said Nagota's younger sister, Ame.

By Saturday afternoon, Ngata, who has experienced a whirlwind few weeks, traveling to meet with officials from teams interested in selecting him, will be some franchise's defensive front-four cornerstone. His surname is pronounced "NOT-a," with the "g" silent. One clever AFC personnel director, reminded last week of the pronunciation, joked that it was appropriate, since "there's not a chance in hell" Ngata will be available when his team chooses in the latter stages of the first round.

The culmination of his longtime dream, not just to play in the NFL but to be a first-round draft choice, will bring fulfillment for Ngata and much-needed security for him and his family. It will also bring to a lucky defensive coordinator a prospect who is arguably the most diversely skilled tackle in this year's contingent of interior linemen, and a player who ought to make an immediate impact as a rookie.

As has been the case in the last several lotteries, the tackle pool for 2006 is talented, and figures to have two or three first-round choices. There is a nice sampling of two-gap run stuffers and one-gap tackles who can penetrate into the opposing backfield. And then there is Ngata, who at Oregon played on the nose in the Ducks' 3-4 front. Depending on the team, Ngata could play that same position at the next level. Or he could align at the nose spot in a 4-3, or perhaps even at end in a three-man line. The last possibility may be a bit of a stretch, but at least one 3-4 team believes it's viable because of Ngata's speed.

"I think his quickness, for a man that big, is excellent," Carolina defensive line coach Sal Sunseri said. "You don't see many guys that size with that kind of athleticism. He can get it moving pretty good."

There are a lot of statistical yardsticks by which one can define Ngata's production at Oregon in three years. He posted 151 tackles, 24½ tackles for loss, 10 sacks, three forced fumbles and one recovery. But to gauge his athleticism, consider this staggering number: The guy blocked seven kicks -- three field goals, three extra-point attempts and a punt -- in his college career. That ties for the 10th-most career blocked kicks in NCAA history.

His 40 time is 5.13 seconds and Ngata turned in solid times in all the change-of-direction drills at the combine, posted a 31½-inch vertical jump and a long jump of 9 feet, 2 inches. Those measurables, combined with 37 repetitions on the standard 225-pound bench press, set him apart. But those seven blocked kicks, even the modest-to-a-fault Ngata conceded, make him rare, indeed.

"Yeah, that's a lot of blocked kicks for anybody, let alone a guy who's almost 340 pounds," Ngata said. "And it's not like I just power-rushed my way in and made the blocks. You watch the tape, and you'll see, I've got some lift when I make those blocks."

Oregon's first consensus defensive All-American since cornerback Mel Renfro in 1962, Ngata gave the Ducks' program a notable lift when he enrolled there. Ngata was the top-ranked defensive line prospect in the country his senior season at Highland High School, and his mother preferred that he attend Brigham Young. Given his strong Mormon upbringing, Ngata considered BYU, but actually committed first to Nebraska, then changed his mind and settled on Oregon instead.

His strong faith has helped Ngata get through the devastating loss of his parents and he prayed every day, he emphasized, as he deliberated whether to stay in school for his senior season or go into the draft. His mother's illness helped make the decision a fairly easy one, even though Ngata almost reconsidered. He suffered a knee injury in the Holiday Bowl and, had it been a torn ligament that precluded Ngata from being able to work out for scouts in advance of the draft, he would have stayed in school.

"But I guess things worked out for the best," said Ngata, who compares his game to that of Detroit Lions standout tackle Shaun Rogers. "I mean, I've basically got a family now to support and to love, and I've got to do everything I can to make my brothers and sister secure and comfortable. Whatever I can do for them, well, they know I'm going to do it. All they have to do is climb on my back, and I'm ready to carry them."