PHILADELPHIA, PA -- Maurice Stovall stood and watched on Saturday, fully absorbed with what was transpiring on the big screen at Dave & Busters restaurant. A few feet to his right, confined to a wheelchair, his mother, Cynthia, watched, too, just as intently. Only, her gaze wasn't fixated on the screen. She kept her eyes on her son as name after name after name, none of them Maurice Stovall, came and went from the podium at Radio City Music Hall.

Cynthia Stovall's look was the kind of gunmetal stare that a mother applies to her son when she senses his tension. She'd used it before, starting perhaps as far back as Maurice's pee-wee football days, and certainly through high school and his career at Notre Dame.

The NFL draft was to be the gift that Maurice, a 6-foot-4, 218-pound wide receiver, was to present to his mother for all of those loving looks through all of those high-tension games. An NFL contract would mean that his mother and father finally could have a nicer home, maybe a luxury car.

And it would mean, perhaps, a lessening of the worries brought on by the reason Cynthia watched the draft, watched her son watch the draft, from a wheelchair.
In February, she was diagnosed with ovarian cancer. By the time they found it, the disease already had spread to her lungs. 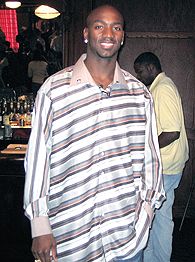 That's what the festivities in the private room at Dave & Busters were all about on Saturday. The party was for Cynthia, who sat with the rest of the family, a hat tugged tightly over her head to hide the ravages of chemotherapy, as much as for Maurice.

"It hasn't been easy, knowing what my mother is going through," said Stovall, who finished at Notre Dame with a career-best senior season good for 69 catches for 1,149 yards and 11 touchdowns. "I found out a month ago. When I first heard my mother had cancer, I was in an airport going back to [Notre Dame]. I was a little emotional over it. But I had to be strong in front of her."

That strength, though, was tested as Saturday afternoon seeped into early evening and the names being called from the podium in New York belonged to other players. Stovall sometimes swayed with anticipation as, first, Commissioner Paul Tagliabue and, later, NFL director of football operations Gene Washington prepared to read a name. And so it went, the mood thickening in the room with each passing draft pick until, finally, a restaurant employee whispered to the Stovall party that their time was up, that their draft party had to end.

The waiting would have to move.

Projected by many experts as the fifth-best receiver in the draft, Stovall had received strong indication that he would be a first-day selection. So his father, Maurice Stovall Sr., threw the draft-day party for Maurice's extended family and friends and a handful of media members.

The first eight receivers came and went. Stovall and his mother still were waiting.

"I couldn't imagine what she's been going through," he said. "Actually, the way my mother is dealing with this has helped me. She considers it a part of life.
She's strong. She's always been strong. Her attitude has helped me, helped my whole family deal with it.
She wants us all to move forward with our lives. It's what she wants. Having her here today means a lot. Her focus has always been on us. My mom really inspires me."

At the restaurant, jerseys, portraits and helmets from Stovall's playing career at the pee-wee level, from Archbishop Carroll High School in the Philadelphia suburbs, and from Notre Dame, were spread on a table in the private room. A cake was made, featuring his portrait.

But deep into the draft's third round, there still was no reason to celebrate. Each time another name; each time a disappointment. By 9 p.m., their time at Dave & Busters had dwindled. The party came to an abrupt end.
Stovall's mother was rolled out of the restaurant in her wheelchair, still smiling, still energetic as she hugged and kissed relatives, friends and well-wishers. 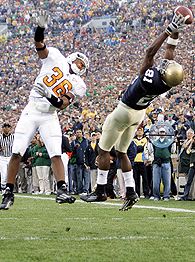 The family retreated to a nearby hotel to watch the rest of the first-day selections. Eighty-nine picks had been made by the time Gene Washington stepped to the podium to announce Tampa Bay's third-round choice.

"Everyone was excited, screaming and hugging," Stovall said. "I was expecting to get picked higher, but that just shows you really can't depend on what you hear from everyone. I'm going to Tampa Bay and I'm happy to play for them."

And Cynthia, who can't talk for long periods of time because the chemo leaves her short of breath, reveled in the moment with her son.

"I wasn't going to let my condition spoil this for him," she said as she smiled. "I wouldn't allow that to happen. This is Maurice's day. Because I have cancer, the world doesn't stop."

Maurice Stovall is on schedule to graduate Notre Dame on May 21 with a multi-degree in sociology and computer applications. That will provide another proud moment for the family -- perhaps a moment less riddled with the tension of Saturday.

"It was kind of hard being patient, expecting to be drafted earlier," Stovall said. "I was a little disappointed by not being selected earlier, but it's not something I was able to control. I had a great turnout with my family here. This was like a family reunion. I'm just left trying to prove myself again. I have full confidence in myself that I can.

"Hey, I'm in the NFL. Seeing [his mother] happy made it a nice day. Now I want her to see me playing in the NFL."

Joseph Santoliquito is the Managing Editor of RING Magazine and a frequent contributor to ESPN.com.