INDIANAPOLIS -- As coaches and general managers stare at a rapidly diminishing list of free agents, they should gain more of an appreciation for the 326 college players invited to the scouting combine in Indianapolis.

Free agency has lost its luster because teams have more ability to keep their own players, leaving fewer impact players available in free agency. The trend should lean more toward the draft than free agency over the next few years as long as teams manage their caps well enough to keep their starters.

Every draft choice will be here, and the good news is more and more of them are running and doing the workouts. For years, scouts grumbled at how agents talked their players out of doing any physical participation in Indianapolis. There were the complaints about the artificial surface which, arguably, was slow at one time but has since been corrected.

The combine now has a surface that allows athletes to show their skills. Plus, it doesn't hurt having most workouts on live network television to inspire more competition. Last year was an education. So many players did their workouts it took the pressure off them at their college team workouts. Those who ran the good times in a competitive situation rested on their laurels and held their draft positions.

A lot goes into these combines. Every player undergoes extensive medical examinations. Teams have the opportunity to interview the players of their choice, giving them a chance to determine their character and intelligence. The workouts are the final part of the evaluation process to get the coaches on the same pages as the scouts who spent the fall making reports on the top players.

Here are the 10 things to watch this weekend. 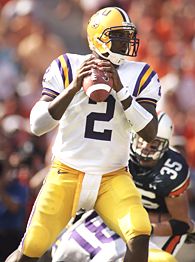 1. Quarterback controversy: Plenty has to be sorted out at the quarterback position. It appears the Raiders are set on taking JaMarcus Russell of LSU at the top of the draft, but there is some uncertainty. If possible, the Raiders would like to trade down to save a few cap dollars. That might be risky. The Browns have made it clear they would like to take Russell so the Raiders can't move down too far. Meanwhile, Notre Dame quarterback Brady Quinn also faces an interesting combine. Even though his name was supposed to be atop this draft, he appears to be fighting the same problems that hurt Matt Leinart last April. Leinart was clearly the darling of college football in 2005 but he lost out to Vince Young and ended up falling to the Cardinals. Scouting reports varied on Young, Leinart and Jay Cutler last year, but all three ended up showing franchise-player ability last season. And while few doubt Quinn's ability to be a great quarterback, some scouting reports do have him slipping out of the top five, which might force him to do some things at the combine instead of waiting for his individual workout. Another question at the position is who is the No. 3 quarterback? Drew Stanton of Michigan State and Trent Edwards of Stanford appear to be the leading candidates for that role. But unlike Cutler last year, the third QB in this year's draft might fall into the second round. Stanton and Edwards need a good combine to gain momentum. Heisman winner Troy Smith of Ohio State seems to have fallen because of his lack of height, so he has a lot to do in Indianapolis.

2. Hi, my name is ... : More time has to be spent with the 40 underclassmen. Since they aren't allowed to play in the Senior Bowl, teams spend as much time as possible getting to know these guys. Underclassmen determine the impact of any draft, and this is a great class of underclassmen. LSU's Russell, wide receiver Calvin Johnson of Georgia Tech, halfback Adrian Peterson of Oklahoma, defensive tackle Alan Branch of Michigan, cornerback Darrelle Revis of Pitt, defensive end Jamaal Anderson of Arkansas and receiver Ted Ginn Jr. of Ohio State are candidates to be in the top 10. There are at least 13 potential first-round underclassmen as well as six other borderline players who could work their way into the first round.

3. Is bigger better? Most of the top wide receivers are big, West Coast offense type players, so those who work out have to show speed. Johnson doesn't have to do much. Everyone agrees he's a top five pick so his ratings will hold no matter what he does. Many consider him a faster version of the Cardinals' Larry Fitzgerald. Big receivers are tough to evaluate because speed can be deceptive. The trend in the NFL has been to go for the shorter receivers who make moves like running backs. The Steve Smiths and Marvin Harrisons have been the favored receivers, so the big receivers in this draft have to impress. Dwayne Bowe of LSU, Dwayne Jarrett of USC, Sidney Rice of South Carolina and Robert Meachem of Tennessee head the list of big receivers below Johnson. Their weights range between 205 and 222 pounds. Ginn is the speedy type receiver teams crave but he's too injured to work out. But there's another Buckeye wideout to watch -- Anthony Gonzalez. He should run in the 4.3s and if he does, he could shoot into the first round.

4. The big uglies: What teams love about this draft is how solid it is along the offensive and defensive lines. The good teams have been waiting for a draft like this for years. Even though some of the skilled positions are thin and might take some of the thrill out of this draft, evaluators love getting the big guys to restock their lines. The most exciting part of this part of the draft might be the chance to see two left tackle candidates lock up top-10 status. Joe Thomas of Wisconsin is considered the top prospect and should go in the top three. Thomas is the athletic, power left tackle who should solidify a line. Levi Brown of Penn State was impressive in the Senior Bowl and is trying to vault into the top five. There is an impressive list of interior linemen such as Arron Sears of Tennessee, Ben Grubbs of Auburn, Justin Blalock of Texas and Ryan Kalil of USC. They will be using the combine and the workouts to set their rating. The SEC was loaded with top defensive ends and they could put on a show. Teams will be looking at Arkansas' Anderson, Charles Johnson of Georgia, Jarvis Moss of Florida and others.

5. Heads or tails: The deadlock between the Browns and Buccaneers for the third pick in the draft will be settled this week by a coin toss. Each team finished 4-12 and played a 137-119 schedule, so because draft position ties are given to the team with the easier schedule, the league has to go to the coin. This is important because the third pick will be a huge one. If the Lions pass on Wisconsin's Thomas with the second pick, the winner of the third pick could take him to fix the offensive line. The winner also gets the first crack at Quinn if he doesn't go in the top two choices. The winner of this coin flip -- and the third pick -- has a lot of flexibility. It could help as far as trade value if the team wants to move down. Considering both the Bucs and Browns have similar needs, this is a big coin toss.

6. Starting the trade machine: The combine gets the trade talk going. The Redskins, who pick sixth, are like several other teams in the top 10 and willing to shop their pick to get more draft choices. Veterans such as Denver's Jake Plummer and Houston's David Carr are being shopped in trades. Something could be resolved before next Tuesday. A couple of years ago, the Randy Moss trade was brokered at the start of the combine. Moss wants out of Oakland, and if the Raiders wish to accommodate him they could find out if there are any interested teams here in Indianapolis. 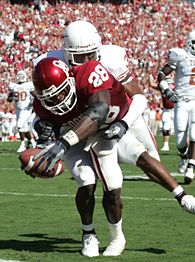 7. In search of running backs: Most of the backs available in free agency aren't considered every-down starters and teams looking for backs will be studying this draft closely. OU's Peterson is clearly the top back and will go in the top 10. Marshawn Lynch of Cal is the next best back and should also go in the first round. After that, the list is thin. Michael Bush of Louisville needs to show he's fully recovered from his broken right leg to get his name back into the first round. Kenny Irons of Auburn, Tony Hunt of Penn State and Brian Leonard of Rutgers helped their stock at the Senior Bowl but probably need to show more to get into the first round. Teams will be looking at underclassman Antonio Pittman of Ohio State to figure out where he fits in.

8. Speed thrills: During the past two combines, the corners have run and those who ran well helped their draft positions. Those who didn't appeared to hurt their chances because one bad day at their school workout could cost them a couple of rounds and a lot of money. The mystery, as always, will be if all of the corners will run. There is really no reason why they shouldn't. For corners, their game is speed. Why not show it in a competitive situation? Any corner who runs a 4.3 could jump a round or two.

9. Tough call on tight ends: It's not considered a great year for tight ends, but the best ones are underclassmen -- Zach Miller of Arizona State and Greg Olsen of Miami. Both are impressive, but they need to convince teams they are valuable enough to be taken in the first round. Tight ends have become such an important part of game because of their abilities to stretch the middle of the field and be tall targets near the goal line. At this combine, teams have to sort out the next wave of second- and third-round tight ends and how they rank behind Miller and Olsen.

10. A once-in-a-lifetime player: Louisville defensive tackle Amobi Okoye had the look of a top-10 player at the Senior Bowl. The amazing part is that he's only 19 years old. If his body can hold up, he could get three huge contracts during his career if he plays well. Okoye played four years at Louisville and kept getting better every year. If he signs a five-year deal, he will be hitting free agency at the age of 24, an age many players are just starting their NFL careers. He's underclassman age with a college degree. Amazing.