INDIANAPOLIS -- This was supposed to be Brady Quinn's draft, but JaMarcus Russell may have stolen it. Other than maybe Daunte Culpepper, the NFL hasn't seen a quarterback with Russell's size.

He checked into the Indianapolis scouting combine at 6-5½ and weighed 265 pounds. Russell, though he looked a little flabby around the mid-section at his weigh-in, is the biggest thing in this upcoming draft and might end up going to the Raiders with the first pick. 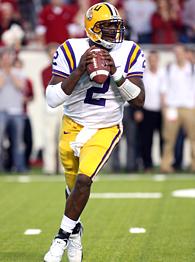 "I started playing football at the age of six," said Russell, who played at LSU. "I've been playing quarterback ever since. I was always bigger and taller than the other kids, and I was always able to throw it a pretty good length of the field."

Even though Raiders owner Al Davis doesn't usually like to draft quarterbacks in the first round, Russell is going to be a hard talent to pass up. Few quarterbacks have entered any draft with this type of arm strength.

Russell said can throw the ball more than 80 yards. Randy Moss was always looking for a quarterback who could try to overthrow him on a deep route. Culpepper, who has one of the strongest arms in football, couldn't overthrow him in Minnesota. Russell can, and it's that type of deep throwing ability that intrigues the Raiders.

"JaMarcus' talent is substantial," Savage said. "He's a rare combination of size and arm strength. It's a little bit out of the norm to take somebody 6-5 plus, 250 pounds plus and can throw the ball around like he can. He is coming out as a Junior, which leads you to think there's upside to him. He's played in a pro-style system at LSU under Nick Saban and Les Miles."

Al Davis will forever be a fan of speed, so it may be hard for him to pass on a wide receiver as big and as fast as Calvin Johnson of Georgia Tech. But Thursday's release of quarterback Aaron Brooks leaves the Raiders with only Andrew Walter on their roster with any quarterbacking experience. Russell is a fit, and friends of new coach Lane Kiffin only hear Russell's name when they hear him talking about next season.

"A lot of people say that," Russell said. "I guess they say that because we're both similar -- big and a little tall. To know that he's an NFL superstar, that feels great."

"I started playing football at the age of six. I've been playing quarterback ever since. I was always bigger and taller than the other kids, and I was always able to throw it a pretty good length of the field."
JaMarcus Russell

On the advice of others, Russell decided not to work out at the combine. History usually indicates the top three quarterbacks in each draft don't work out. Quinn isn't working out and he is Russell's main opposition at the position. There is a big gap to the next quarterback in the draft, a gap that could go well into the second round.

For now, it appears Russell is No. 1.

"I don't necessarily have to protect it because you never know what people think," Russell said. "It's an honor to go so high. I'm just honored to be here."

Truly, Russell made a big impression.

Around the combine
• The Browns won the coin toss for the No. 3 overall pick in the draft over the Bucs, but it might not change too many of the early forecasts. The Raiders, with the first pick, look like they are leaning toward Russell. The Lions could go with Wisconsin left tackle Joe Thomas. The Browns appear to be leaning toward Oklahoma running back Adrian Peterson. That leaves Georgia Tech wide receiver Calvin Johnson for the Bucs at No. 4.

• The 49ers are trying to work out a one-year deal with defensive end Bryant Young. Young voided the final two years of his contract, but he is a valuable leader to that team and Mike Nolan doesn't want to lose him. They definitely don't want Young to hit the open market.

• The scary part of Lovie Smith's prolonged contract negotiations is that Smith has already lost five assistants and he still isn't any closer to a deal. Smith is the NFL's lowest-paid head coach at $1.35 million a year and his coaching staff was the lowest paid last year. Smith expressed optimism Friday about getting a deal done but only talked in generalities. "I have a contract, and I would like to be the Bears head coach the rest of my football career," Smith said. "It's a great franchise. I have a great job. I work for good people." But his contract runs out in 2007. Smith announced he hired former Bucs linebacker Hardy Nickerson as his linebackers coach.

• The Chiefs are expected to put the first- and third-round tender on restricted free-agent defensive end Jared Allen, but they also realize the importance of getting a long-term deal. Allen is a valuable defensive end with a high motor. The Chiefs need to lock up that engine for a long time.

• It's pretty clear Giants coach Tom Coughlin is hurt by the criticism of Tiki Barber. Coughlin explained it well. Barber had his three best seasons under Coughlin and finished each season strong.

• Ohio State center Doug Datish learned a valuable lesson at the combine. Don't joke around. He was asked if his back ever stiffened. He replied, "Doesn't everybody's." Teams heard that and ordered two extra MRIs on his back that had him spend extra hours at the hospital. His back was fine. Teams are going to check on any stated injury, even if it's a joke.

• NFLPA executive director Gene Upshaw was pleased and a little surprised how vocal some players were at a Thursday meeting about trying to clean up the off-the-field problems. Players spoke up about how tired they are that players keep putting themselves in places where they could get in trouble. It's starting to lead to a possible three-strike policy for repeat offenders. Don't expect some penalties to come quick, though. Seahawks safety Ken Hamlin talked about an incident last year in which he was out and became a victim of a beating. He was with his family. He was well-behaved. His point was it's hard to define an incident because sometimes players are victims. This will be a hot topic during the offseason.

• Back to the Giants. Coughlin has released the team's top two left tackles -- Luke Petitgout and Bob Whitfield. He said guards David Diehl and Guy Whimper could be candidates for the job unless they find a veteran or rookie left tackle to start.

• The Bears figure it will be tough to get a long-term deal with linebacker Lance Briggs, who was franchised. With that in mind, they will let him play out the season and see what happens later. Briggs wants more than middle linebacker Brian Urlacher.

• Don't expect the Bears to trade Thomas Jones either. Even though Jones wants out of Chicago to get an improved contract and a clear starting job, the Bears won't accept an undervalued deal. The Bears might not accept anything less than a first-round pick and another pick.