INDIANAPOLIS -- Recent history suggests putting up a big yellow caution light in front of a draft filled with big, tall wide receivers. Those West Coast offense-style receivers who became so popular have produced a number of cautionary tales. 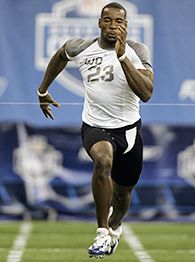 Start with Calvin Johnson of Georgia Tech. If Randy Moss is called The Freak, Johnson should be called Super Freak. Surprise filled the media room at the Indianapolis scouting combine Friday when Johnson revealed that he recorded 239 pounds at his combine weigh-in, about 12 pounds more than anyone expected. Minds flashed to Mike Williams' failures with the Lions.

Then, Johnson said he would wait until his March 15 workout at Georgia Tech to let everyone see his speed. Toying with the minds of scouts and the laws of reality, Johnson changed his mind. He borrowed a pair of running shoes and ran the 40-yard dash in an incredible 4.35 seconds on Sunday. Because Johnson is 6-foot-5 and 239 pounds, cornerbacks around the NFL must have cringed when they heard that.

Send those borrowed shoes to the Pro Football Hall of Fame, because a legend was born Sunday in Indianapolis. Prompted by reporters' questions, Johnson wouldn't dismiss the notion that he is the best athlete in this draft.

"I definitely feel that way," he said. "I'm standing right in front of you. I mean, not many people have my size, speed and strength."

Also, Johnson comes to the NFL baggage free, which is helping his ascent of draft boards. His character checks out well. He says he's a physical combination of Moss and Terrell Owens with Marvin Harrison's work ethic. Moss and Owens are great talents who often cause coaches great headaches.

Tampa Bay Buccaneers coach Jon Gruden might have initially felt he lost on Friday when a coin flip dropped the Bucs behind the Browns for the fourth spot in the draft. Johnson would complete a perfect series of offensive draft choices if he could join running back Carnell "Cadillac" Williams and wide receiver Michael Clayton.

"This is the biggest and fastest group of receivers I've ever seen."
Scott Linehan, Rams coach

Gruden still has hope, though. The Raiders are set to keep Moss and receiver Jerry Porter, and as tough as it might be for owner Al Davis to pass on Johnson, they will likely go for quarterback JaMarcus Russell of LSU. After going one for three with big receivers (Williams, Rogers and Roy Williams) in recent drafts, the Lions certainly can't take Johnson, particularly after re-signing Mike Furrey (and they plan to go after Kevin Curtis of the Rams). The Browns appear to be leaning toward Oklahoma halfback Adrian Peterson, leaving Johnson as the steal of the draft to Tampa Bay at No. 4.

The legend of Johnson includes incredible leaping ability. Last summer, Johnson tried some vertical jumps. The highest mark was at 45 inches and Johnson outjumped it. "It was last summer, and I hit the top thing in my vertical," Johnson said. "I barely touched it, so I'm sure I can do more now."

But Johnson isn't alone. Five of the six top-rated receivers are between 6-2 and 6-5 and they weigh between 205 and 239 pounds. Robert Meachem of Tennessee was particularly impressive Sunday. The 6-2, 214-pounder ran a 4.39 40-yard dash, caught just about everything thrown his way and positioned his feet after most catches to be able to break runs after the catch.

"We're all tall, big and physical and we each do our own thing," Meachem said.

Said Rams coach Scott Linehan, "This is the biggest and fastest group of receivers I've ever seen."

Notes from around the Combine
• The Eagles tried to re-sign Jeff Garcia at a lower number than he thought he would get on the open market. They held their offer until Sunday when they extended the contract of A.J. Feeley for three years. The Broncos might be willing to pay the most for a top West Coast offense backup, which is why everyone figures Garcia is heading to Denver once free agency starts.

• Though the Eagles would like to bring back Correll Buckhalter as Brian Westbrook's backup, they are willing to wait into the start of free agency to try to get him back at the right price. Like the Garcia decision, the Eagles set a price on re-signing backups and don't want to overspend.

• The hottest trade name in Indianapolis isn't necessarily Bills running back Willis McGahee. It's Lions cornerback Dre' Bly. Ten teams initially showed interest in Bly, but the list has been trimmed to a more manageable six. The Lions gave Bly permission to shop himself and his phone has been overloaded by teams making recruiting calls.

• Chris Henry had the most impressive time among the running backs. On handheld times, he ran a 4.33 40. According to the official NFL time at the combine, he tied Adrian Peterson by running a 4.4.

• Guards Kris Dielman of the Chargers and Eric Steinbach of the Bengals were two of the hottest free agent names at the combine. There are rumblings each could challenge the $7 million a year contract received by Vikings guard Steve Hutchinson last season. Paying $7 million for a guard was considered an outrage by many NFL teams last year. Some teams would try to justify Steinbach's high number by playing him at tackle or center. Dielman is a pure guard.

• The Cowboys could emerge as the lead team for Cardinals left tackle Leonard Davis. The Cardinals decided not to franchise Davis and will let him hit the market. The 49ers and Cowboys are expected to be the teams that are the most interested and many feel the Cowboys will be the winner.

• Titans running back Chris Brown is hoping he could be reunited with his former quarterback, Steve McNair. The Ravens are trying to restructure the contract of Jamal Lewis, but they could be looking for a backup if Musa Smith leaves in free agency. Brown was the Titans' starter at the beginning of last season but lost out to Travis Henry. Brown asked to be traded during the summer.