INDIANAPOLIS -- Not too long ago teams were lamenting what to do with the yearly scouting combine.

The artificial turf in the RCA Dome was slow, so players, convinced by agents, almost never ran. So coaches, scouts and general managers left Indianapolis grumbling about an impossible schedule of workouts they were going to have to attend in March and early April. The situation was becoming so hopeless that combine planners wondered whether moving the event to a warm-weather site would inspire more participation.

On Tuesday, the NFL completed a successful 2007 combine and everyone took a collective breath. Players ran fast. Roughly 300 of the 327 players participated in at least one of the workout drills. Like last year, teams can now get an earlier jump on setting up their draft boards because they have legitimate times and physical measurements for such a large number of the players.

Now, workouts are on live television, and players and agents are eating up the attention. Georgia Tech wide receiver Calvin Johnson, who didn't plan to run, got caught up in the moment, borrowed some shoes and ran a blistering 4.35 40-yard dash. The moment was memorable.

Jeff Foster, who coordinates the combine so well, even opened parts of Sunday's workout to two sets of pool reporters, another sign of potential future openness. More than 350 media credentials were used for the combine. It's become the NFL's version of the baseball winter meetings, set less than a week before the start of free agency.

Agents pay a lot of money to get players ready for their workouts. What's great to see is their investments are worthwhile. Players looked like track stars as they ran the 40.

Here are some of the highlights of the 2007 combine:

1. Winners: Where do you start? Calvin Johnson is clearly the best athlete in this draft; at 6-foot-5 and 239 pounds, he was still able to run a 4.35 in the 40. That's freakish. Wisconsin left tackle Joe Thomas thought the track was a little slow but, weighing 311 pounds, he ran an impressive 4.92 40 and had 31 lifts at 225 pounds. Wide receiver Jason Hill of Washington State blistered everyone with a 4.32 40, pushing himself from the third round into the second or maybe even the first. Greg Olsen of Miami blew away the tight ends with a 4.51 in the 40, more than two tenths of a second faster than the next closest tight end. Olsen secured a spot in the first round. Chris Houston of Arkansas (4.32) and Jonathan Wade of Tennessee (4.36) were extremely impressive among the defensive backs. Chris Henry of Arizona was the surprise at running back, tying Adrian Peterson with a 4.4 in the 40. Gaines Adams of Clemson might have locked up the top defensive end spot with a 4.64 40-yard dash. Safety LaRon Landry of LSU secured a top-10 spot by running the 40 in 4.35.

2. Losers: Scouts always say no one loses if they run at Indy, but that isn't always true. Not every prospect who works out at the combine has his best day, putting a lot of pressure on his individual workout. What's true this year, though, is that only a few prospects saw their stock drop. JaMarcus Russell is considered the likely No. 1 overall pick by the Raiders, but he had 10 pounds of excess weight around his stomach that he needs to shed. He didn't work out, and there will be plenty of scrutiny on his physical conditioning when he has his individual workout on March 14. Tackle Levi Brown ran in the 5.2s and failed on his bid to move ahead of Thomas as the top offensive lineman. Still, Brown should be a top-12 pick. Wide receivers Sidney Rice of South Carolina and Dwayne Bowe of LSU didn't run fast. The stakes are getting higher for receivers in terms of speed. Both need good times at their individual workouts. Linebacker Lawrence Timmons of Florida State was a borderline first-rounder, but he didn't look quick enough and might have slipped into the second round.

3. What's left: Brady Quinn starts off the main individual workout season on March 4 at Notre Dame. He showed his strength by putting up 24 reps at 225 pounds, but he needs a good throwing day to push himself toward the top of the draft. All eyes will be on Pittsburgh cornerback Darrelle Revis to see if he can match the top times at cornerback. Wide receivers Ted Ginn Jr. of Ohio State and Dwayne Jarrett of USC still have to run their 40s at their workouts. Ginn doesn't know when he can run because of the foot sprain he suffered in the national championship game. Rumors have Jarrett running bad times in some of his training. Michael Bush of Louisville has to show everyone his broken leg is healing. Defensive end Jamaal Anderson of Arkansas plans to put on a show to see if he can move ahead of Adams as the top defensive end.

4. Speed is everything: No position in the draft is like cornerback. It's a track meet. Most teams hold off on their ratings for cornerbacks until they watch them run. Eight defensive backs ran 4.4 or under at the combine. Chris Houston of Arkansas may have jumped toward the top of the pack with his 4.32 time in the 40. Jonathan Wade of Tennessee (4.36), Leon Hall of Michigan (4.39), Josh Wilson of Maryland (4.39), Marcus McCauley of Fresno State (4.39) and Aaron Ross of Texas (4.44) set the early line for speed as the cornerback position sorts out.

5. Speed receivers: The cornerbacks coming into the NFL better be fast because the receivers were like lightning at the combine. Nineteen receivers ran 4.49 or better. This is one of the biggest, most impressive groups of receivers seen in years. Johnson was obviously the highlight, but Hill (4.32) helped himself the most. Robert Meachem of Tennessee ran a 4.39 and caught the ball very well. There could be six to seven first-round wide receivers. It's clearly one of the most impressive positions in the draft.

6. No. 3 quarterback battle: Michigan State's Drew Stanton appeared to get a little edge over Trent Edwards of Stanford and Troy Smith of Ohio State, but the combine did little to sort this one out. Smith threw but did not run. He throws the ball harder and faster than most but his accuracy was shaky. Stanton wasn't completely accurate, but he looked smoother as a pocket passer. Smith admitted he was a little out of shape by being on the banquet circuit. Quinn, meanwhile, seems confident he'll put on a pretty good show at his Notre Dame workout on March 4. He's clearly the No. 2 quarterback now and is moving back toward the top five. Russell was a bit soft around the midsection but he still has the strongest arm in the draft. 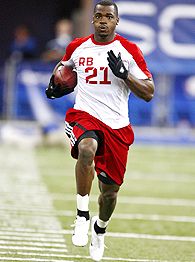 7. Backfield in motion: Clearly, this is a two-back draft. Peterson will probably go to Cleveland with the third pick and Marshawn Lynch of Cal secured a mid first-round grade with his 4.46 time in the 40. Peterson tied Chris Henry of Arizona with a 4.4 40 and he did it despite finding out his half brother was shot over the weekend. That's simply incredible concentration. What's interesting about the rest of the backs is that there are great, raw, big backs who will be available in the second and third rounds. Henry came out of nowhere to run his 4.4 weighing 230 pounds. Ohio State's Antonio Pittman helped his stock with a 4.4 40. Michael Bush of Louisville still has to run. This isn't the year to get an impact running back -- either in free agency or in the draft, but it's a good year to add depth. The backs in the draft are big and have some speed. The free agent backs are more 1-A type of prospects who may not be featured but can help.

8. Interior decorating: Guards and centers looked particularly good during the combine. USC center Ryan Kalil was the best looking center at the Senior Bowl and he was the most impressive athlete at center with a 4.96 40. Justin Blalock of Texas was impressive at guard with a 5.1 40 and did 40 reps at 225 pounds. Good interior linemen could run through the third and fourth rounds and many look as though they could start in their first seasons.

9. Strong class of defensive ends: Clemson's Adams and Arkansas' Anderson hoped to convince the Cardinals and the Redskins to make them the fifth and sixth players in the draft, and this is one impressive group of defensive ends. Adam Carriker of Nebraska was the top linemen on the 20-yard shuttle and is clearly the top 3-4 end available. He should be on the fringe of being in the top 10. Big Ten blockers talked about how tough it was to stop Purdue end Anthony Spencer and his testing explains why. He was one of the best in the cone drills and the shuttles. Good pass rushers are like that.

10. Summing it up: Though Russell looks to be the No. 1 pick with the Raiders, we'll have to watch the trade market to see if the Raiders can move Randy Moss. If they do, Al Davis could fall for Johnson because he loves speedy receivers who are big. Thomas should go second to Detroit. Peterson may have locked up the Browns' pick at No. 3. The Bucs will lean toward Johnson, but don't discount the possibility of Jon Gruden falling in love with Quinn. Adams and Anderson could go to Arizona and Washington with the next two picks, but they have to sort out the order. Plus, the Redskins, who don't have picks in rounds two, three and four, might be trying to trade down to get more picks.