It's a weird time to be a linebacker coming out of college these days.

Only a handful of college teams use the 3-4 defense, so few linebackers enter the NFL with any expertise in the scheme. Worse, the rapid use of spread offenses in college make the middle linebacker position virtually obsolete. With four or five receivers on the field, it's hard enough for a college defensive coordinator to justify putting more than one or two linebackers on the field, let alone designate one to roam from tackle to tackle making run stops. 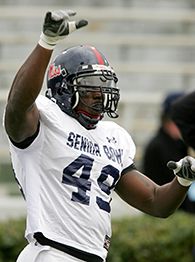 While linebackers might not be getting NFL-type job training in college, the results of the transition has been an unbelievable success. The past two defensive rookies of the year -- DeMeco Ryans of the Texans and Shawne Merriman of the Chargers -- were linebackers. Seven rookie linebackers, including A.J. Hawk of the Packers, Ernie Sims of the Lions and Thomas Howard of the Raiders, won weakside linebacker jobs, played more than 68 percent of the defensive downs and started at least 11 games.

The bottom line for a linebacker in the 2000s is just be a good football player and the NFL will find a way to make it work.

The 2007 draft might not have as many immediate first-year linebacker starters as the past three drafts -- which boasted an average of 10 linebackers getting at least five starts -- but it's loaded with good football players who should be adaptable to whatever system in which they land.

Heading the list is Patrick Willis of Mississippi, whose strengths include versatility and the ability to adapt. His training against SEC offenses helps for what's ahead of him on draft day. The 49ers, who draft 11th, like him for their 3-4 defense. The Bills, who are looking for a run-stuffing tackling machine to replace London Fletcher, want Willis in the middle. The Panthers, who draft 14th, don't know if he would play outside or in the middle. All they know is he can play for them at any of the linebacker spots.

At Mississippi, Willis played in the 4-3 scheme and he's prepared for whatever.