In the earliest days of Maurice Clarett's misguided effort to test the rules on draft eligibility, there was considerable debate over whether any high school football player might be able to make the quantum leap, NBA style, from the preps to the pro game.

The athlete most often cited in 2003 as perhaps being NFL-ready: tailback Adrian Peterson, who at the time was preparing for his senior season at Palestine (Texas) High School. He ran for 2,960 yards and 32 touchdowns that year before departing for Oklahoma. 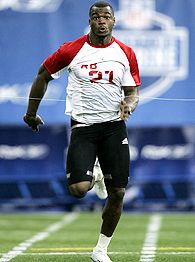 Somewhat ironic is that several of the same league scouts who opined that Peterson might be a guy who could defy all odds by going directly from high school to the NFL now wonder, nearly four years and 4,000-plus yards later, about the viability of the former Sooners star as a high first-round draft choice. The more notable irony: Most of those talent evaluators would love to have Peterson, the top-rated back in the 2007 draft, on their team.

Despite the recent deconstruction of Peterson, the concerns over durability and toughness and the fact he started only 14 games over his final two college seasons before bypassing his final year of eligibility and entering the draft, the Oklahoma star won't be on the draft board long. He is among the elite group of seven or eight premier prospects in the pool, a likely top-five selection, and perhaps destined to be one of the top three picks.

Tampa Bay coach Jon Gruden, who only two years ago snatched tailback Carnell (Cadillac) Williams with the fifth overall choice in the 2005 draft, claimed Peterson "might be the best back I've ever seen coming out of college." Even factoring in the usual Gruden hyperbole factor, and allowing that the Bucs' coach might be doing some posturing as he attempts to manufacture a scenario in which Georgia Tech wide receiver Calvin Johnson falls into Tampa Bay's No. 4 slot in the first round, that is pretty high praise.

Peterson insisted last week he is indeed worthy of the praise.

"When I'm healthy, which I am now, I don't know what kind of questions there should be, really," said Peterson, who appeared in only seven contests in 2006 after fracturing his right clavicle in an Oct. 14 victory over Iowa State. "Everyone has checked out the [collarbone] and it's fine. So what else is there? I can run tough inside. I can make the long run. And I want the ball in my hands. I understand that [scouts] are just doing their jobs, and they have an investment to protect, but I think I've answered all the doubters."

Or, at least, most of them.

There remains a small subset of skeptics, scouts who question the advisability of perhaps doling out a $30 million rookie contract to a player at a high-risk position such as tailback, and one who comes complete with a fairly thick medical dossier. According to surveys by the NFL Players Association, running back has the shortest career span of any position in the league. And during his career at Oklahoma, Peterson, 22, dealt with a dislocated left shoulder (2004), a high right ankle sprain (2005) and the broken clavicle (2006).