SOUTH BEND, Ind. -- Brady Quinn finally gave NFL scouts,
coaches, general managers and owners an up-close look at what he
can do on the field.

Quinn, whose only workout at the NFL combine was benchpressing
225 pounds 24 times, took part in a half-hour workout Sunday at
Notre Dame's pro day. He threw a variety of passes, with
representatives from every NFL team watching. 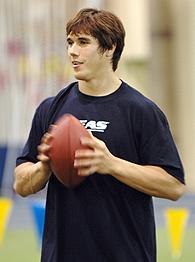 "We threw everything people wanted to see," Irish coach
Charlie Weis said. "We put him through every throw that any NFL
organization would want to see -- from moving in the pocket, to
moving from the pocket, to three-step, to five-step to seven-step.
I think now they have enough information to make a critical
evaluation, if they didn't have enough on tape already."

Quinn, who had fluid drained from his right knee at halftime of
a game against Southern California and aggravated the injury in the
Sugar Bowl against LSU, didn't take part in any of the agility
drills: the 40-yard dash or the 60-yard shuttle run. He said he'd
do that at Notre Dame's next pro day on March 22.

Quinn has been the center of much draft speculation,
particularly over whether the Oakland Raiders will use the No. 1
overall pick to take him or LSU's JaMarcus Russell.

Some draft analysts have said Quinn's draft status has been
weakened since the end of the season as NFL teams reviewed the way
he played, particularly in the Sugar Bowl. Quinn said he can't
understand how people are saying his stock is going down.

"We haven't done anything since then and people are sitting
there saying, 'You're stock's going up, you're stock's going
down,"' Quinn said. "It's kind of comical in that sense. You're
just working out, doing the best you can every day."

"Really, he made more throws here than you'd think about making
at the combine," Childress said. "I think he threw about 60 balls
here today and it takes a little bit of endurance to be able to do
that and he did it pretty rapid-fire succession."

Crennel said Quinn clearly had zip on his passes.

"The fact he could make all his throws, both right and left,
he's a polished quarterback," Crennel said. "He's smart. When you
watch him on tape you can see he knows where to go with the ball.
He will, at times, throw it away when he has to, so we think he's a
good, young prospect."

Quinn threw 63 passes, connecting on 58 of them. On two
occasions, former Irish receiver Matt Shelton got his hands on
passes but couldn't pull them in. Rhema McKnight couldn't catch a
35-yard pass or a 20-yard pass he dived for. Quinn also overthrew
tailback Darius Walker on a 25-yard pass.

"I thought there were four catchable balls and one crummy throw
to the right-hand side," Weis said.

Quinn said he was pleased with his performance, although he
thought he could have done better.

"I think there's definitely still room for improvement," he
said.

Quinn plans to return to Arizona to continue to prepare for the
draft. Crennel said he didn't mind that Quinn didn't show off his
speed.

About 100 people were at Notre Dame's indoor practice facility
to watch the workout, including some of Quinn's former teammates --
and his possible replacement -- Jimmy Clausen. Several other former
Irish players also worked out, including offensive guard Dan
Santucci and offensive tackle Ryan Harris.

Quinn said he doesn't have any preference for who drafts him, he
just wants to be drafted as high as possible on April 28.

"I just want to go No. 1," Quinn said. "That's really what
I'm looking forward to, and I hope that will be the case in the
end."