In the first NFL draft in 1936, the Philadelphia Eagles made University of Chicago halfback Jay Berwanger the first overall choice. Two picks later, Pittsburgh drafted William Shakespeare, if for nothing else, because his name sounded vaguely familiar.

After being traded to the Bears, Berwanger, the 1935 Heisman Trophy winner, had the audacity to ask George Halas for a two-year, $25,000 contract. When Halas said no, Berwanger took a job in the foam-rubber business and moonlighted as a sports writer for the Chicago Daily News.

Berwanger and Shakespeare never played professional football, in part, because they could make more money doing other things.

Now, 70 years later, the draft has a little more allure. It has become a year-round obsession for some, providing the backdrop for some strange moments.

In 1972, NFL Films had its cameras in the Atlanta Falcons' draft room. When it was time for Atlanta to make its 17th-round pick, head coach Norm Van Brocklin jumped out of his seat and shouted, "Do we want the roughest, toughest S.O.B. in the draft?" 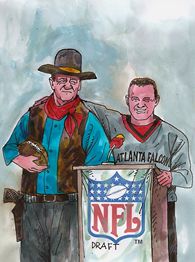 Everyone in the room joined in saying, "Hell, yes!"

Van Brocklin grabbed the phone and dialed the league office in New York.

"We got a lecture from the powers that be that the next time it happens, a team would not get its pick back," said former Packers general manager Ron Wolf, who was in the Raiders' player personnel department at the time. "Late in the night things would just happen."

For the record, Wayne played a famous college football coach in the 1953 film "Trouble Along the Way," which tanked at the box office.

Asleep at that wheel

In the first round of the 2002 draft, the Cowboys were attempting to trade down to select Oklahoma safety Roy Williams. Cowboys owner-general manager Jerry Jones made the trade with the Chiefs, and Dallas was poised to select Williams with the eighth overall pick, but Jones lost track of time.

"Jerry went to sleep at the wheel," former Cowboys scouting director Larry Lacewell said. "And all the sudden someone shouts that we only have 10 seconds left."

According to Lacewell, Jones' son, Stephen, dived across the table to call in the Williams pick and the Cowboys ended up with about a second to spare.

"That's as close as I ever saw us come to losing one," Lacewell said.

'I wanted the guy from Mississippi'

The Seahawks' front office headed into the morning of the 1991 draft with a three-way deadlock at quarterback -- Dan McGwire, Browning Nagle and Brett Favre. Being polite, general manager Tom Flores asked for input of owner Ken Behring. He picked McGwire for two reasons. First, Behring thought McGwire would be the easiest to sign because his agent was Leigh Steinberg, whom Behring knew and liked. Second, the owner thought he would be getting more for his money with a 6-foot-8 quarterback.

McGwire, brother of baseball slugger Mark McGwire, was a big disaster for the Seahawks after being selected 16th in the draft. Coach Chuck Knox sensed the disaster on draft day and didn't show up for any of the early-round news conferences. Asked by a reporter as he left the building on draft day which quarterback he preferred, Knox said, "I wanted the guy from Mississippi.''

Favre was taken in the second round by Atlanta. The Packers' QB, a probable first-ballot Hall of Famer, will return in '07 for his 17th season.

And the reporter selects

In 1983, the Steelers didn't know it, but they were at a crossroads.

The Chuck Noll-led team was still good enough to be a playoff contender, but Terry Bradshaw was getting older and the Steelers had lost that flair for winning Super Bowls. As the draft shaped up, the Steelers faced tough decisions.

Noll built the four-time Super Bowl champs around a defensive tackle, Joe Greene, and thought he might do the same around Texas Tech star Gabe Rivera, one of the first wave of mobile 300-pound defensive tackles. People in the personnel office were pushing for Dan Marino, a hometown legend at Pitt who happened to slip in the first round.

Before the Steelers' selection, a reporter suggested a trade that would assure them of getting Marino. Owner Dan Rooney took the suggestion into the draft room. When asked by people in the draft room who made it, Rooney mentioned the reporter's name.

The response turned suddenly negative. The Steelers took Rivera, whose promising career was cut short by a paralyzing car accident. Marino was a Hall of Famer for the Dolphins.

The Philadelphia Eagles picked Syracuse fullback Norm Michael in the 18th round of the 1944 draft but were never able to locate him.

The Eagles didn't realize he had joined the Army and was stationed in Alabama. It only took Michael 55 years to find out about his selection.

He got the news when he picked up his local newspaper in 1999 and noticed a list of every Syracuse player who had ever been drafted by the NFL.

The Redskins made UCLA running back Cal Rossi the ninth overall selection in the 1946 draft before realizing that he was coming off his junior season and wasn't eligible. The persistent franchise once again drafted Rossi in the first round of the 1947 draft.
The only problem was that Rossi had made it known he had no intention of playing professional football, and true to his word, he never played a down for the Redskins.

Projected as a first-day pick in 1995, BYU offensive tackle Eli Herring wrote letters to every team in the league indicating he didn't intend to play because of his religious beliefs.

The Raiders gambled that the devout Mormon would eventually change his mind and selected him in the sixth round.

True to his word, Herring never played a down. He instead became a high school teacher and coach.

"I wouldn't change what I did," Herring told the Deseret Morning News in 2004. "I've had opportunities to serve in my church and be with my family on the Sabbath that I would never had if I'd had a long professional football career."

Tampa Bay may have had one of the biggest screwups ever in the 1982 draft. The Bucs were on the clock in the first round and, as time was running down on their pick, team officials instructed their representative in New York, trainer Pat Marcuccillo, to fill out two cards with the names of their possible selections. The players were Penn State offensive lineman Sean Farrell and Bethune-Cookman defensive end Booker Reese.

As the clock ticked down, the noise in the draft room grew deafening, because the New York Giants had the next pick and their fans were getting restless. With the time period for Tampa Bay nearing expiration, Bucs officials instructed Marcuccillo by phone to turn in the card with Reese's name on it. But in the din, Marcuccillo misheard them and turned in Farrell's name instead. Once the card went in and the Bucs' choice was recorded, it was too late to change. So there were the Bucs, having chosen a player they didn't want, and without the prospect they most coveted.

Farrell, the guard they didn't want, played 11 seasons, including five with the Bucs, appeared in 123 games, and was regarded as one of the best guards of his era. Reese lasted less than three full seasons in Tampa Bay, started in just seven games, and was traded to the Rams during the '84 season for a 12th-round draft pick. He is currently in prison for cocaine possession. But that's not all.

In 1983, quarterback Doug Williams bolted the Bucs and signed a contract with the USFL. Had the Bucs still owned their first-round pick in the '83 draft, the 18th overall, they would have been able to choose a quarterback, perhaps Marino, in that draft to replace Williams. But they didn't have the pick because they had dealt it to Chicago in '82 to make up for the Farrell-Reese screw-up.

The Cowboys drafted Mississippi Valley State wide receiver David McDaniels in the second round of the 1968 draft based on his blazing speed. The only problem was that he couldn't run away from anyone during his first training camp.

Sensing something was wrong, the Cowboys asked him to run another 40-yard dash and he came in at 4.73 seconds, a bad time for a wide receiver. A quick investigation revealed that he had inadvertently been measured in the 38-yard dash at his college track. In 1969, the Cowboys traded McDaniels to the Eagles in a deal that landed them Mike Ditka.

In the '86 draft, the Bucs chose Auburn tailback Bo Jackson with the first overall pick but without having negotiated parameters of a contract with him. Turns out Jackson didn't much care for Tampa Bay owner Hugh Culverhouse, and eventually rejected the team's offer of a landmark five-year, $7.6 million contract. Instead, he signed a three-year, $1.067 million deal with baseball's Kansas City Royals and stiffed the Bucs, who hadn't done their homework on him. The following year, he re-entered the NFL draft and was chosen by the Raiders in the seventh round.

At the news conference to announce Jackson's rejection, Culverhouse tried to put a positive spin on things. According to the St. Petersburg Times, the Bucs' owner recited the lyrics to Dionne Warwick's "That's What Friends Are For."

Matt Mosley covers the NFL for ESPN.com. He may be reached at matt.mosley@sbcglobal.net. John Clayton and Len Pasquarelli are senior writers for ESPN.com.