NEW YORK -- JaMarcus Russell barely had to wait before taking the stage as an Oakland Raider at Saturday's NFL draft. Brady Quinn turned out to be the forgotten quarterback, lingering long after Russell was picked, until Cleveland took him 22nd.

Russell was the top choice, by the offense-deficient Raiders. The 6-foot-6 junior QB who can throw the ball 80 yards fits the mold for Al Davis, who loves the deep ball. 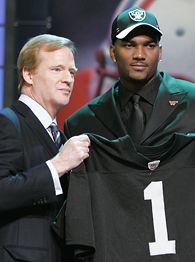 LSU players had plenty of draft-day luster. Five spots after Russell, Tigers safety LaRon Landry went to Washington, and two more Tigers were chosen later in the opening round.

Notre Dame's Quinn sat and watched 21 players get called before he went to the Browns, the team he grew up rooting for in Dublin, Ohio. Once considered the best prospect in this year's crop, he was still available when the Browns traded with Dallas to get back into
the first round.

When selected, Quinn let out a big sigh before shaking commissioner Roger Goodell's hand, and fans who booed him before the draft cheered him this time.

"I felt like the weight of the world was lifted off my shoulders," Quinn said. "The love-hate relationship comes from going to Notre Dame. It's like the Yankees -- you either love 'em or hate 'em.

Russell had no such anxious moments.