Three rounds. 100 picks. This 2018 NFL mock draft is similar to our "Grade: A" projections -- it's all about whom we would take at each pick. We're playing general manager for all 32 teams. 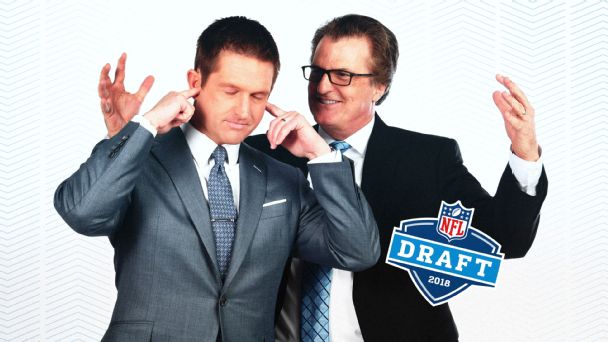 Mel and Todd alternate first-round picks for all 32 teams to create the "perfect" mock. Listen »

The ground rules are simple: alternate picks; no trades; no deals that say "I won't take Player X if you don't take Player Y." It's just "This is whom I'd take" at every slot on the board for three full rounds. Kiper kicks us off with the Browns.

We'll explain each pick below, and needs play a big part. We're not going to reach on our boards, but we are taking into account holes on each roster.

It's going to be a quarterback here, and Allen has the tools to be a superstar. He's the top quarterback on my board. I explained more here.

The Giants would definitely consider Sam Darnold here, but Barkley is a generational talent and the top prospect in the draft.

If the Giants pass on the second quarterback, the Jets should pounce. Darnold has to be more consistent with his mechanics.

Chubb is a terrific all-around player and the top defensive prospect on my board. Slide him in opposite Myles Garrett and that's a terrifying pass-rushing duo.

Rosen could battle Case Keenum to start in 2018. He's NFL-ready -- if he stays healthy.

A hot name right now, Smith is a sideline-to-sideline linebacker who can play the run and the pass. Indianapolis needs playmakers all over on defense.

Wow, that's a little early for Smith. For the No. 7 pick, it was Fitzpatrick or Denzel Ward, and Fitzpatrick is higher on my board. The Bucs' secondary has to get better.

Chicago would be thrilled with this pick, getting the No. 2 player on my board at No. 8. Nelson is a plug-and-play guard.

Love Ward's fit in San Francisco, and this would be a dream pick for general manager John Lynch. How important was that coin flip with Oakland at the combine?

That coin flip looms large, but James is a good consolation prize. He's one of the most versatile prospects I've evaluated, and Oakland needs playmakers on D.