In December, ESPN NFL draft experts Mel Kiper Jr. and Todd McShay previewed one of the most interesting drafts in recent memory, running through the best prospects, lingering questions and more.

And now that you've read their mock drafts, rankings, buzz and so much more over the past few months, they're back with one last catch-up question-and-answer session before the real thing begins Thursday (8 p.m. ET on ESPN and the ESPN App). Check out McShay's All-Tape Team and more below, too.

1. Does Browns GM John Dorsey know who he's picking at No. 1?

Kiper: Yes. Dorsey has been tight-lipped, but he knows. It's going to be a quarterback, and he has met with each of the top guys. Is it Wyoming's Josh Allen or USC's Sam Darnold? I'm not buying the smokescreen with Oklahoma's Baker Mayfield. We'll find out with the rest of the world on Thursday night. 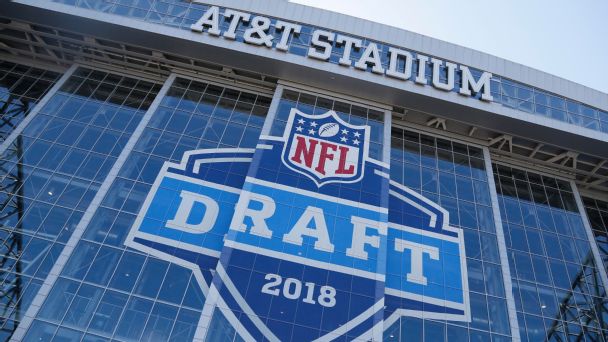 McShay: Penn State running back Saquon Barkley. Let's not make this difficult; he's the best prospect in this class.

3. Which team is most likely to trade up?

Kiper: It's Buffalo, which holds picks 12 and 22 in Round 1 and has four more Day 2 picks. Will the Bills try to move up for a quarterback? Look at Houston and Kansas City last year. It's going to cost a lot, but the Texans and Chiefs got their guys. The Bills desperately need their quarterback of the future.

4. Which team is most likely to trade down?

McShay: I'd say Denver at No. 5. I think Indianapolis at No. 6 and Chicago at No. 8 are also possibilities.

Kiper: Dave Gettleman is in a great but challenging spot. And he probably already has gotten several trade offers. But if I were in his shoes, I'd get my quarterback. You can get an impactful running back on Day 2. The Giants have more talent than the typical No. 2 pick, so they're not likely to be here again anytime soon. Take the quarterback who's going to be the starter for 10 years -- after Eli Manning retires.

6. Who are the hottest names in this draft?

7. Which prospect will be drafted higher than most think?

Kiper: LSU cornerback Donte Jackson. The tape shows a Day 2 pick, but 4.32 40 speed means he could sneak into Round 1. The draft is all about projection, and Jackson has traits.

8. Which team has to absolutely nail this draft?

McShay: Every team needs to nail the draft but no team has a greater opportunity to change fortune of its franchise than the Browns do. They have four picks in the top 35 and five in the top 64. If they can find their QB (which is a 20-year drought), take Bradley Chubb or Barkley at 4, and then get two really good starters from the other three picks in the top 64, that's a great draft.

Kiper: My pick for the team we'll be talking about on Saturday night: The Colts, who have the No. 6 overall pick and three second-round picks, thanks to the Jets trading up and dealing two to Indianapolis. The Colts have a chance to grab four starters. Just don't reach for need, Chris Ballard. Take the best player available.

10. Who's your favorite prospect-to-player comp in this class?

McShay: UTSA defensive end Marcus Davenport to Ezekiel Ansah. I had a higher grade on Ansah, but the length, rawness and power are similar at this point.

11. Would Bradley Chubb have gone No. 1 over Myles Garrett last year?

Kiper: No. Chubb is the best pass-rusher in this class by far, but I had a higher grade on Garrett. Chubb would have slotted in ahead of Solomon Thomas, though. He went No. 3 to the 49ers.

12. Who is the combine breakthrough who is now a first-round lock?

McShay: Louisville cornerback Jaire Alexander was a standout. He's now my 15th-ranked overall prospect, and a 4.38 40 and 35-inch vertical at the combine helped.

13. Which cornerback has a higher grade: Marshon Lattimore last year, or Denzel Ward this year?

Kiper: This is a tough one. Ward is going to go higher than his former Ohio State teammate did -- Lattimore went 11th to New Orleans -- but I liked Lattimore a little more. Ward is a top-10 lock. Both are my top-ranked corners, though. And Lattimore's success in Year 1 probably helps Ward.

McShay: This is Mel's guy, but it's UCLA offensive tackle Kolton Miller. He had a great combine and the tools are there, but he needs time to develop. He's raw. He's not polished enough with his hands.

15. Which prospect will go lower than he should?

Kiper: The guy I like on Day 2 who could be a really good player is Georgia running back Nick Chubb. He tested great at the combine, and he had a fantastic college career. His injury history is what is keeping him out of the first round, but I really think he's going to play early and often in 2018. He could make a Kareem Hunt-like impact.

16. Who's the prospect who will be overdrafted based on what you've seen on tape?

McShay: SMU wide receiver Courtland Sutton. Sutton is a height-weight speed guy at 6-3, 218 with a 4.55 40, but he doesn't play that big on tape. I think he'll be drafted sooner than he should based on his measurables.

17. Which prospect will teams try to trade up for to grab at the end of Round 1?

Kiper: The big question is: Where will Louisville quarterback Lamar Jackson go? I think he's a lock for the first round. But if he's still on the board in the 20s, you could see a team trade up to get him. The Patriots are sitting at 23 and 31 -- could a team jump up to 22 to get Jackson before Bill Belichick & Co. have the chance?

McShay: There are some good choices here, but I'll take USC's Uchenna Nwosu. As a 3-4 outside linebacker, he can keep guys off his pads, has shock in his hands and good suddenness rushing the passer.

19. You're in a draft room. Who's the guy you're pounding the table for when Day 2 begins?

Kiper: I'll give you two to watch: South Dakota State tight end Dallas Goedert and Georgia guard Isaiah Wynn. I have first-round grades on two tight ends -- the other is South Carolina's Hayden Hurst -- but there aren't many great fits from 20-32, so one of those guys could drop. As far as Wynn, guards sometimes drop, and he's the second best in this class.

20. Which first-round pick is the perfect fit for a team?

McShay: Roquan Smith to the 49ers at No. 9, if he makes it there. San Francisco has an obvious hole at inside linebacker and Smith could immediately solve that.

Kiper: Gruden loves defensive playmakers, and he wants guys who are going to play hard on every snap. And the Raiders need defenders in every spot. So with the 10th pick, keep an eye on linebackers, pass-rushers and defensive backs. If Georgia's Roquan Smith falls to 10, he could be Gruden's new Derrick Brooks. The fallback plan could be Virginia Tech's Tremaine Edmunds.

22. When can we expect to hear Shaquem Griffin's name called?

McShay: I'd love to see the UCF defender get picked late on Day 2, but my gut, information and evaluation says early on Day 3.

Which top-5 pick is most likely to be traded?

Mel Kiper Jr. says the Broncos would be most likely to trade down in the draft with the Bills as a potential partner.

23. When will sixth quarterback Mason Rudolph go off the board?

Kiper: I'll be safe and say the top 50 picks. The three teams I'm eyeing as potential fits for the Oklahoma State signal-caller: New England at 43, Arizona at 47 and the L.A. Chargers at 48. I also wouldn't be shocked if a team traded up to begin Round 2 and took him.

24. How many running backs will be picked in Round 1?

McShay: I'm going to say only one -- Saquon Barkley. I would have said two, but concerns from Georgia back Sony Michel's medical rechecks might push him into Day 2.

Kiper: This is 50-50, in my opinion. UCLA's Kolton Miller and Notre Dame's Mike McGlinchey are first-round locks. After that, I'm not sure if another one goes. If I were running a team, I wouldn't take Texas' Connor Williams in Round 1, and he might move to guard anyway. Louisville's Geron Christian is another possibility, but he's more likely to be a top-40 pick.

26. Who's the best slot corner in this draft?

McShay: Florida's Duke Dawson. I really like his tape and think he'll probably go in the third round.

Kiper: LSU's D.J. Chark, who ran a 4.34 40 and had a 40-inch vertical jump at the combine. His tape is inconsistent overall, but he can run past most defensive backs. Expect him to be picked at the top of Round 2.

28. Which prospect not named Saquon Barkley could be a fantasy star in Year 1?

Kiper: My top-ranked wide receiver is Alabama's Calvin Ridley, who is advanced as a route runner and is already 23. He can be a Week 1 starter, and his game (and size) reminds me some of Hall of Fame wideout Marvin Harrison.

Consider this McShay's 2018 NFL draft awards, in which he highlights the best of the best in a few categories.

Smith diagnoses a play faster than any player in this class. I love watching his instincts on film and his tackling skills. He brings his hips through contact and hits a lot harder than you'd think for a 237-pound LB. Chubb reminds me of Joey Bosa in his efficiency of pass-rushing. He rarely takes a false step. Ridley didn't jump very high or fast, but he's the best route runner in this class. He simply gets open. Jewell will drop because he ran a 4.82 40 at the combine, but he processes information at linebacker as well as anyone outside Roquan Smith. Jamerson is a maniac on special teams. I love watching a guy who's on the field, making plays in all phases.

I liked all of Reid's tape, and he has really good range in coverage. With a really good combination of instincts, speed and athleticism, he's your classic single-high free safety. Miller's knee injuries might factor into him falling a bit on Day 2, but he's one of the better route runners in this class. He loves doing the dirty work, and has really good instincts. He had 238 catches the past three seasons, so the production is there. Leonard is a small-school guy who showed up at the Senior Bowl and had a great week. He's a perfect fit for today's NFL, as a guy with average size (6-2, 234), but with 34.5-inch arms and who can run a 4.7. He dominated his level of competition and is a really good athlete.

Jackson has the potential to be a star in the NFL, but it's all about where he goes. Not just the situation, but the coaching staff. If he winds up going to a team that is creative offensively, like New England or New Orleans, and has a couple of years to develop behind a veteran, he could be a big success. If he winds up in a different situation, I'm worried it's not going to work. Davenport is extremely raw, but there are very few guys who are 6-foot-6, 264 pounds and can run a 4.58 40. He has a high ceiling. Bryan has the quickest first step of any pass-rusher in this class but doesn't always know what to do after that point. Still, he's creating disruption and, with more coaching and time, could be a big-time player.