KANSAS CITY, Mo. -- In the moments leading up to the start of the 2017 NFL draft, sports agent Leigh Steinberg sat with relative calm at a party thrown by his client, Patrick Mahomes. The star quarterback from Texas Tech had opted to rent a country club in Tyler, Texas, to watch the proceedings with family and friends, rather than travel to the draft in Philadelphia.

Mahomes and many of his guests settled in for what it seemed could be a long night, with Mahomes thinking he might not be selected until the third round, which would take place the next day.

Steinberg, a veteran agent who has represented Hall of Fame quarterbacks Troy Aikman and Steve Young, among others, sensed that the night would proceed a lot faster for his client than what was commonly believed.

"The draft is less mysterious when one is representing a player than it is to the general public," Steinberg said. "The Chiefs expressed interest to us early in the process, and we knew they really liked Patrick. But they were going to have to move up several spots if they were going to make it happen."

Trading up for Mahomes 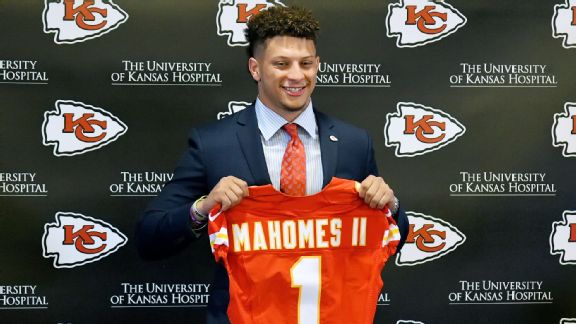 At Chiefs headquarters in Kansas City, team chairman Clark Hunt was far more nervous. The Chiefs had gone with journeymen quarterbacks and discarded players at the game's most important position for almost all of their 57 seasons. But in Mahomes, the franchise had finally identified a young prospect it thought it had to have.

The Chiefs did not pick until No. 27, though, and like Steinberg, they were aware that they wouldn't get Mahomes without making a big leap in the first round. They had discussed deals with five or six teams near the top of the draft -- with at least one trade locked in place.

But the variables were too many for the Chiefs to feel confident about getting Mahomes.

"We knew that we were interested in Patrick, and if the opportunity came along for us to trade up and get him, it was something that we wanted to do," Hunt said. "I would say that in a lot of ways, it made it more of a nervous first hour just watching the players come off the board."

With Mahomes still available as the draft reached the 10th pick, the Chiefs took that trade they'd had in place. They sent the 27th pick, a third-round selection and their first-round choice in 2018 to the Buffalo Bills for the right to draft Mahomes with the 10th pick.

The trade looks like one that will alter the balance of power in the AFC for years to come, something the Chiefs sensed when they made it.

"It was pretty tense in [the draft room] for a little bit because we knew there were a couple other teams trying to get him," coach Andy Reid said. "There was a bit of tension, but everyone was excited when it happened. It wasn't one of those deals where half the room was in on him and half wasn't. Everybody was in on this kid and liked him, so everyone was pretty fired up."

The timing was right in more ways than one for the Chiefs to draft a quarterback in the first round for the first time in 34 years. They had a veteran quarterback in Alex Smith, but some in the organization thought the Chiefs had gone as far as they could with him.

Smith led the Chiefs to the 2016 AFC West championship, their first in six years, but hadn't been able to get Kansas City past the divisional round of the playoffs in his four seasons as the starter. At the time of the 2017 draft, Smith was a couple of weeks short of his 33rd birthday.

More importantly, Mahomes was a quarterback prospect like few others Reid had seen.

"We got to know the kid before we got to know the kid. Everybody kind of just fell in love with the kid and what he was all about and how he went about his business and how he played. That doesn't happen every year. I'm saying it like it's easy. That's not something that happens every year. When that happens, Ron Wolf told me this a long time ago: 'If you have one of those guys that you like, you go get them.'"

If the NFL were to do the 2017 draft over, Mahomes would be the No. 1 overall pick. In his first season as a starter in 2018, Mahomes became the second quarterback in league history to throw for 50 touchdowns and more than 5,000 yards. The Chiefs advanced to the AFC Championship Game for the first time in 25 years, losing to the eventual Super Bowl champion New England Patriots.

At the time of the draft in 2017, the Chiefs didn't need to move up to the top pick to draft Mahomes, though. John Dorsey, the Chiefs' general manager at the time, read the draft perfectly by jumping to 10 but no higher.

"The draft prognosticators are projecting things, and if you recall, they had anointed this trio of [Mitchell] Trubisky, [Deshaun] Watson and DeShone Kizer, and they were considered the top-round quarterbacks," Steinberg said. "At the beginning, they had Patrick at best a second-rounder. Everybody publicly was saying he was years away from being ready to play, but teams were communicating with us, and we were aware Kansas City liked him very much. We were also aware there were a number of other teams that liked him, teams like the Arizona Cardinals, the New York Giants, the New Orleans Saints, the Pittsburgh Steelers. There were teams that would try to make the move a year early to try to prepare their next starting QB.

"We're sitting there on the night of the draft, and there's communication going back and forth between teams and agents. It's not something you see, but we're on our phones talking with coaches and general managers. We were aware of certain teams that said they were trying to trade up. If Kansas City hadn't gone exactly where they went, he would have been gone. He would have been gone on the very next pick."

Dorsey had much the same sense. He identified the Cardinals, Giants and Saints as teams the Chiefs needed to maneuver in front of. The Saints picked 11th, the Cardinals 13th and the Giants 23rd.

"I tried to read as much as I could, in terms of reading the other 31 teams and seeing where they were positioning," Dorsey said shortly after Mahomes was drafted. "I felt to get this player, I had to be at 10.

"I know there were three teams that wanted this player very badly, and I got a text or two [afterward] asking, 'How'd you do that?' It worked. I've got to thank the Buffalo Bills. They were willing to acquire some picks, and that would help them as well, so it helped out both parties."

Dorsey and Doug Whaley, then the Bills' general manager, started discussing the trade at the NFL scouting combine in February. They got serious about trade terms in the days leading up to the draft.

Whaley said last week that he didn't know the player the Chiefs were after and didn't suspect it was a quarterback, despite the steep move from 27 to 10.

"Not at all," said Whaley, who was fired shortly after that draft for reasons not having to do with the Mahomes trade. "The Chiefs played it right. With Alex Smith on their roster, we didn't think they were coming up for a quarterback.

"From our standpoint, we had a new coach, and we thought the trade gives us a chance to drop down and still get a really good player and still have two [first-rounders] the next year. At the time, it was something we thought was very beneficial for the Buffalo Bills. In our situation, we thought it was a win for us and a win for them. They got the guy they wanted. We got the guy we wanted and an extra first-round pick the next year."

The pertinent question now, of course, is what the Bills would have done with that 10th pick had they not sent it to the Chiefs. The Bills needed a quarterback at the time, and last year they drafted Josh Allen in the first round.

"That's hard to say," Whaley said. "Once we got close, we knew we were going to take the trade."

Would the Bills have taken Mahomes?

"There's always the possibility," he said.

If so, Mahomes and his 50 TD passes and 5,000 yards could be with the Bills. The Chiefs might still be quarterbacked by Smith, who was eventually traded to Washington.

That isn't a scenario the Chiefs want to contemplate. They have a long-standing organizational policy that trading a future first-round pick requires approval of ownership.

In this case, Hunt was eager to approve.

"It's not a decision that I took lightly," Hunt said. "But with all things considered, it was not a hard decision. The chance to get a quarterback who can be a franchise quarterback for the Chiefs in the future made it a pretty easy decision."