GREEN BAY, Wis. -- The Green Bay Packers traded up late in the first round of the 2020 NFL draft on Thursday night, using the 26th pick to select the potential heir to Aaron Rodgers: Utah State quarterback Jordan Love.

No, general manager Brian Gutekunst didn't tell Rodgers he was going to do it. And no, Love doesn't know how Rodgers will react.

"I haven't connected with Aaron yet, but he's obviously been through this and he's a pro," Gutekunst said. "I think it's certainly, this is something that is a long-term decision. I think when you go through kind of the way things went tonight, you run the short term and the long term. The way the board fell, this was the best decision for the Packers. I think obviously Aaron's been around for a long time, and he knows what we're playing for right now, and that's what's most important right now."

The Packers traded the No. 30 selection for the Miami Dolphins' spot at 26, a move that cost them a fourth-round pick.

The Packers hadn't drafted an offensive skill-position player in the first round since they took Rodgers in 2005, and Love's selection ends the longest active such drought in the NFL.

But it doesn't help Rodgers, who was a game away from the Super Bowl last season, only to lose to the San Francisco 49ers in the NFC Championship Game.

"We've got the best quarterback in the National Football League, and we plan to have him for a while competing for championships," Gutekunst said. "I can understand the fan base and people thinking, 'Why would you do this at this time?' But I just think the value of our board and the way it sat, it was the best for the Green Bay Packers, and we're really excited to get Jordan here and get him in the door and learning our system.

"I know a lot of people will look at this as not a move for the immediate, and I understand that, but the balance of the immediate and the long term is something that I have to consider, and that's why we did it."

When Green Bay drafted Rodgers, starting quarterback Brett Favre was 35, and he turned 36 during the following season. Rodgers, who is under contract through 2023, is now 36 and will turn 37 in December. 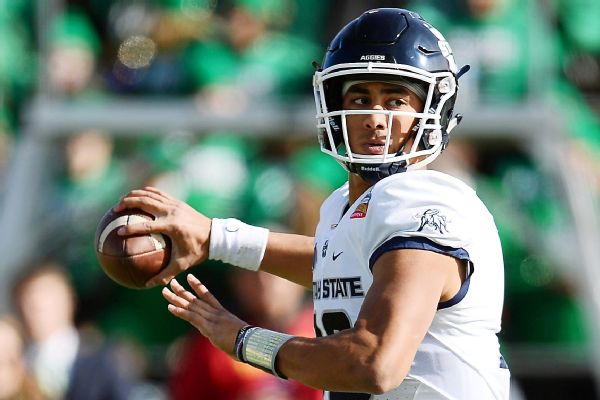 Rodgers told ESPN Milwaukee radio last month that he was "realistic" concerning his future and wouldn't have an issue with the Packers drafting a quarterback.

"I know where we're at as an organization and where I'm at in my career," Rodgers said. "I still feel like I have a ton of years left playing at a high level. I'm confident enough. I've always felt like it doesn't matter who you bring in; they're not going be able to beat me out anytime soon. I feel really confident about my abilities and my plays.

Gutekunst wouldn't go so far as to call Love the heir apparent.

"I think that's probably not fair -- I don't think you can put that on him right now," he said. "Right now I think he just needs to come in and learn and try to become the best quarterback he can be. We did draft him in the first round, so we like a lot about him. We think he has a very good upside to become a starter in the National Football League."

Love told ESPN's Suzy Kolber shortly after the selection: "I'm already knowing I can learn a lot from Aaron Rodgers. I mean, that's one of the GOATs right there in the game. I'm excited to be able to come back behind him and learn as much as I can." But on a conference call after the draft, he admitted he did not know how Rodgers will take to him.

Love becomes just the third Mountain West Conference quarterback taken in the first round in the common draft era (since 1967), joining Alex Smith (Utah) in 2005 and Josh Allen (Wyoming) in 2018.

Love was one of the most polarizing players in this year's class, with some teams believing he was the best thrower in a deep quarterback pool and others seeing him as a Day 2 pick.

At Utah State, he put up elite numbers in 2018, with his 32 passing touchdowns tied for eighth most in FBS as he led the Aggies to an 11-2 record. But he struggled to replicate that performance in 2019, throwing 20 TDs and 17 interceptions in Utah State's 7-6 campaign.

"Obviously, the 17 interceptions, that was way too many interceptions for me for that season; and I did a lot of bad things for the team that year," Love said on SportsCenter earlier this week. "For me, I guess you could look at the numbers and say I had a terrible year compared to the 2018 season. But for me, it wasn't that much different; it was really just the turnovers and the bad decision-making I made."