Seeking enshrinement in the Pro Football Hall of Fame?

You'll need the usual allotment of Pro Bowls and national honors, preferably spread across a long career. Having played for a winner will help. Championships carry more weight.

You might need a skilled selector advocating your cause to the other Hall voters. Most of you will need patience, too. These things can take a while. 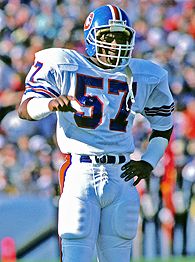 Oh, and another thing: Unless your name is John Elway, don't tell anyone you played for the Denver Broncos. For reasons not quite clear, Broncos enshrined in Canton are rarer than the Mile High air. The typical Hall of Fame discussion deteriorates into emotional exchanges between vested parties. This one is as basic as a Randy Gradishar form tackle.

The other nine have won between 45 and 59 percent of games. Denver has won 53 percent.

The other nine average 2.1 league championships (AFL or NFL). The Broncos own two.

The other nine average 17.6 playoff appearances. Denver has 17.

Here's the kicker: The other nine have placed 62 people into the Hall of Fame, about seven apiece on average. Elway is the only Bronco, giving Denver as many inductees as New Orleans, Seattle, Tampa Bay and Cincinnati.

"How can Denver, which has been a powerhouse team for a long time, have only one?" Harvard statistician Carl N. Morris said.

Morris reviewed the data, to no avail.

"The thing I keep thinking about trying to figure out is what is on the minds of Hall of Fame voters," he said.

In other words, teams appear to produce more Hall inductees as they play and win more games, as one would expect. Teams other than the Broncos, that is.

Six new inductees take their places in Canton this weekend. For the 44th time in 45 annual ceremonies, there won't be a Bronco among them. Only Atlanta has fared worse among franchises established before 1995 -- no surprise given the Falcons' winning percentage (.408) and lack of postseason success.

"I'm not in a position to judge who is worthy for the Hall of Fame," Broncos owner Pat Bowlen told reporters recently. "The only problem I have is with the voting process. I don't have a solution to that, but I think that it is flawed and the Denver Broncos are a perfect example."

No process is perfect, and the current one hardly appears biased against any team.

Four-time finalist Gary Zimmerman, a mainstay with Denver and Minnesota, famously earned spots on the NFL's all-decade teams for the 1980s and 1990s. His candidacy remains strong.

Gradishar, a seven-time Pro Bowl linebacker who never missed a non-strike game in 10 seasons, was a Hall finalist in 2003, but never since. Pro Football Weekly named him the 10th-best linebacker after Jack Lambert and Ray Nitschke.

"Our defense became the Orange Crush, nationally recognized for years like the Steel Curtain or the Purple People Eaters," Gradishar said. "Why did that go away? That is the frustration for Bronco fans."

Terrell Davis gives the Broncos another prominent candidate. Floyd Little, Karl Mecklenburg, Steve Atwater, Dennis Smith and Tom Jackson have yet to gain traction. Shannon Sharpe and Rod Smith are among those not yet eligible.

The next few years will deliver Jerry Rice, Tim Brown and Rod Woodson as first-time candidates. With two seniors getting strong consideration each year, the next cut of legends has a harder time.

"It's not an easy thing, especially with those (big-name) guys coming of age," said Saleem Choudhry, researcher for the Hall of Fame. "That was in part why we opened the second senior slot, to make sure we don't leave anyone behind."

The Broncos have appeared in six Super Bowls. They've made more playoff appearances than Kansas City, New England, San Diego and the New York Jets, among others.

Not bad for a team with one more Hall of Famer than the Houston Texans.