To project which NFL franchises are in the best shape for the next three seasons, we asked our panel of experts -- Louis Riddick, Mike Sando and Field Yates -- to rate each team's roster (excluding quarterback), quarterback, draft, front office and coaching using this scale:

After averaging the results from the panelists, each of the five categories was weighted to create the overall score -- roster (30 percent), quarterback (20 percent), draft (15 percent), front office (15 percent) and coaching (20 percent). The result is a comprehensive ranking based on how well each team is positioned for the future.

Can the New England Patriots count on having a chance to win even more rings? How far will the Dallas Cowboys rise behind Dak Prescott and Ezekiel Elliott? And what about the Cleveland Browns, who had a dismal season but have some intriguing young pieces?

Read through the full file No. 1 through No. 32, or jump to your favorite team using the quick links below. 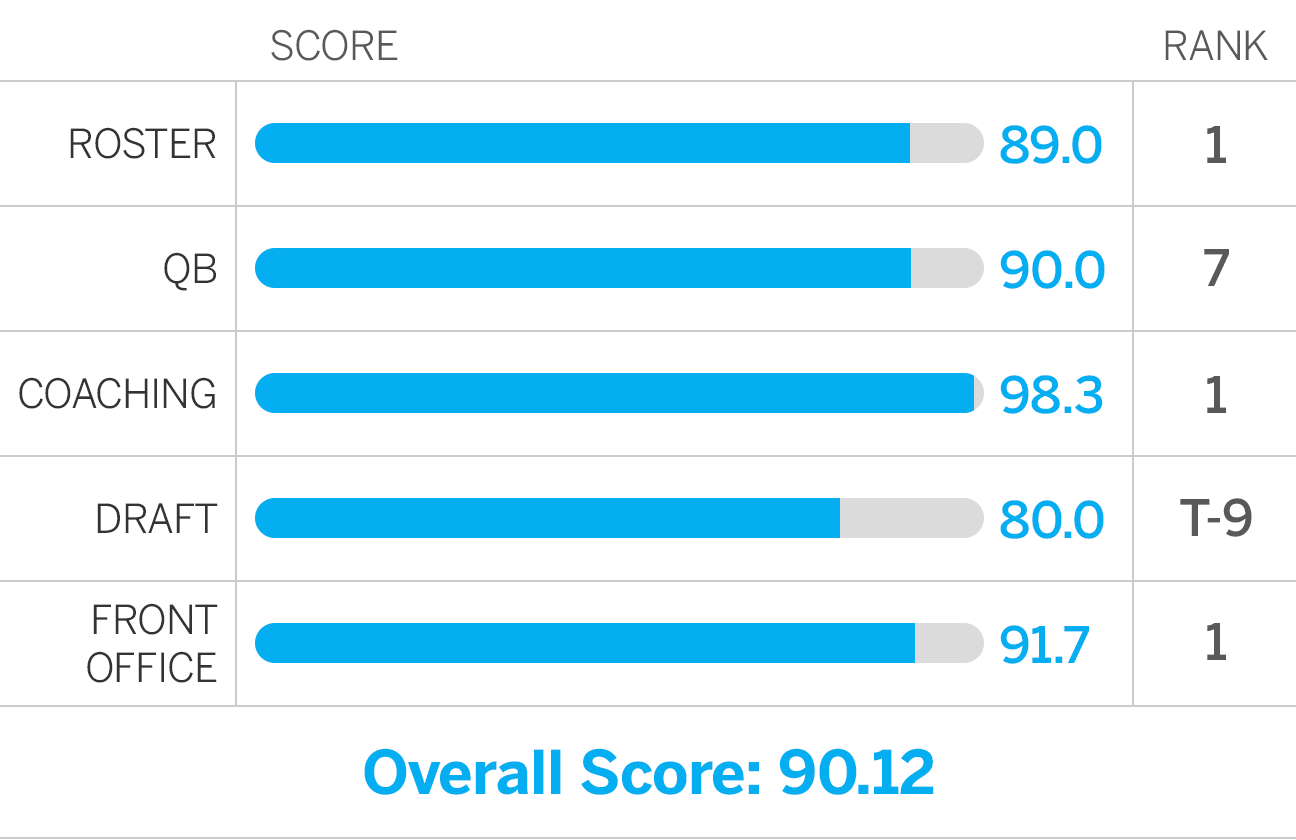 Why they're here: It's shortsighted to look past the remarkable career and acumen of Tom Brady. He's the best player on the planet. But the Patriots' No. 1 ranking here is also a reflection of their deep, talented roster. The nucleus of players signed through at least 2019 also includes: Rob Gronkowski, Devin McCourty, James White, Marcus Cannon, Stephon Gilmore, Julian Edelman, Dont'a Hightower and others. The pipeline is strong. -- Field Yates

Biggest worry: There's no way to predict how much longer Brady will play at a high level, but the wall will come eventually. The other looming unknown: How much longer does Bill Belichick really want to coach? No matter how good QB Jimmy Garoppolo becomes or how qualified Belichick's replacement is, the eventual absence of Brady and Belichick will have a tremendous impact on this organization. -- Louis Riddick

What could change for the better: The Patriots rank so high in most categories that it's tough to find areas where they might outperform projections, but if Brady really can remain a top QB into his mid-40s, as he has said he plans to do, then the No. 7 ranking in that department could be conservative. If Brady doesn't last that long, there's also a chance the team could refocus around Garoppolo and remain exceedingly well-positioned at that spot. -- Mike Sando