CINCINNATI -- A $10,000 fine made little impact on Cincinnati Bengals
receiver Chad Johnson, who plans to ignore the NFL's guidelines on
celebrations and self-expression. 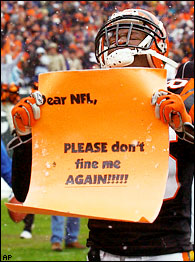 The league fined Johnson on Tuesday for holding up a preprinted
sign after he scored the first touchdown in a 41-38 victory over
San Francisco.

Johnson, who has been fined repeatedly for violating guidelines
on uniform appearance and on-field celebrations, didn't agree with
his fine or the $30,000 penalty that New Orleans Saints receiver Joe Horn
received for pulling out a cell phone after a touchdown.

"The fine was ridiculous," Johnson said Wednesday. "It
doesn't matter. It's OK. I've got two more games left [this season]
-- that's two more fines, then I'm finished for the rest of my
career with the fines."

It was the third time Johnson has been fined this season for
touchdown celebrations that violated league rules.

He and Peter Warrick were fined $5,000 apiece for striking a
photo pose in the end zone after a touchdown in Cleveland on Sept.
28. Johnson got another $5,000 fine from the league for making a
throat-slash gesture following a score against Seattle on Oct. 26.

He scored the first touchdown Sunday against the 49ers, then ran to a snow bank behind the end zone and pulled
out a preprinted orange sign that said, "Dear NFL: Please don't fine me again."

Coach Marvin Lewis wasn't happy with the sign; he wants his
players putting the focus on the team instead of themselves. Lewis
and some Bengals veterans also were unhappy with Johnson after he
guaranteed a win over Kansas City on Nov. 16.

Johnson said Wednesday he's not going to change with two games
left in the regular season.

He admired Horn's touchdown stunt of stashing a cell phone under
the goalpost padding, then pulling it out and flipping it open to
make a call after a touchdown.

"That was nice," Johnson said. "It was different."

Lewis doesn't mind players celebrating, but is opposed to staged
routines designed to draw attention to one player.

"That's being orchestrated," Lewis said. "That's not spur of
the moment. That's the whole thing -- be spontaneous, make it be
unique to you."