Smith: I'm sitting here talking to the defensive back of the year, Super Bowl champion, yet he is unhappy. Why? What is going on?
Law: Well, I've got a very unstable situation with my team and it is getting pretty ugly right now. I think I'm more upset with the picture being painted of me. It's totally out of character what people are writing about me. 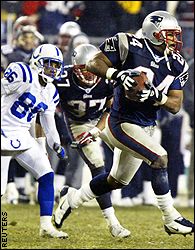 Smith: What picture is being painted?
Law: That I'm selfish, greedy. Not a team person. People don't understand this is my job, this is a business and they need to look at the flip side of things to see why I might make some of the comments I made.

Smith: You say he has done it before. Who did he do it to?
Law: Rodney Harrison, you know, older than me. You know, my teammate, I love him to death. A six-year deal. I was even willing to meet him half way. He said only a four-year deal and I'm talking six to seven. And I said, "OK lets split it down the middle. Lets go five." He said he can't do that. Tyrone Poole  older than me  five-year deal. Got drafted the same time I got drafted. The pick right before me in 1995  he got a five-year deal. And then I went as far as saying you gave Drew Bledsoe a 10-year deal. It was big headlines, a lifetime deal for Drew Bledsoe, 10 years. And my cap number was bigger than his at that time.

Smith: So Bill Belichick in your eyes is a liar?
Law: Yes.

Smith: Can you play for him? Knowing that you feel and publicly stated your coach is a liar?
Law: You know what? When I'm out there on the field, it's not like I'm playing for Coach Belichick. I go out there and play for myself. I play for my teammates and I'm going to go out there and fight. But at the same time, as far as being passionate about playing for the organization. Knowing that  there is background to all of this. Knowing that you had no desire for me to do as well as I did so you can justify releasing me. I have a problem with that. You know, I go out there.

Smith: Do you know for a fact he didn't want you, listen to what you are saying? He didn't want you to do as well as you did?
Law: I know for a fact and I can't say where my source is at. And I can't say the names because it might cost them their job. But when you are told whether it was the front office or the back office. And the way our facility is set up, it's upstairs and downstairs that, you know what Ty? Remember you know you are auditioning for 29 other teams.